Will Lidl follow Aldi’s path in the U.S. – or Tesco’s? 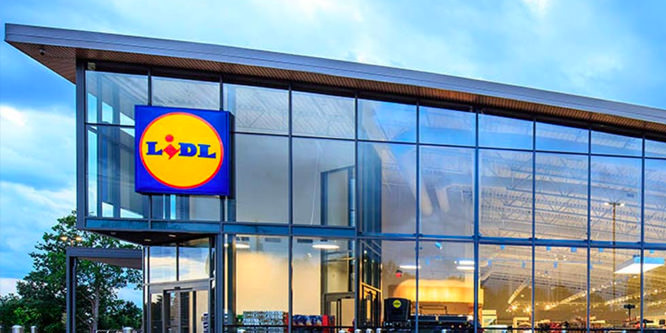 Lidl, the German hard discount grocery chain, has big plans for the U.S. The same can be said for Aldi, another business founded in Germany, which is rapidly expanding its American store count. It was also true for Tesco’s Fresh & Easy chain, although that venture ended in failure. So, is Lidl ready to follow Aldi? Is it doomed like Fresh & Easy or will it go its own way?

News that Lidl is struggling to gain traction in the U.S. popped up a couple of weeks ago when it was reported by Lebensmittel Zeitung, a German trade paper, that the company had appointed Michael Aranda, former head of Lidl Spain, to a board in charge of overseeing the company’s fledgling U.S. operation.

Mr. Aranda was brought in, according to Supermarket News, over concerns that the performance of at least some of the 37 stores opened by Lidl since the summer has been “frighteningly weak.” Lidl’s corporate management believes that adherence to its system is key to the success in the U.S and brought in Mr. Aranda to impose greater discipline.

Concerns about Lidl’s performance in the U.S. were echoed in a recent Wall Street Journal article.  Christopher Mandeville, a senior analyst for Jefferies & Co., described seeing only two shoppers enter a Lidl in Richmond, VA.

“It was completely crickets,” he said.

The same report, pointed to research by inMarket, which found that Lidl’s draw of all grocery traffic at stores in the Carolinas and Virginia went from three percent in June to two percent in August.

Lidl’s entry has sparked local price wars, according to reports by the Journal and the Financial Times. Rivals, from Aldi to Walmart, have responded with price cuts that have, in part, blunted Lidl’s attempt to lure customers away.

Ali Dibadji, senior analyst for the Sanford C. Bernstein & Co., told the Journal that Lidl needs to adjust its product mix. He pointed, as an example, to stores that emphasized organic produce when more locals bought conventional.

“It’s not about whether our model works in a market,” Will Harwood, a Lidl spokesperson told the Journal, “but what we do to adapt to that market.”

DISCUSSION QUESTIONS: Do you think Lidl’s experience in the U.S. is more likely to resemble Aldi’s or Tesco’s Fresh & Easy? What do you see as the key challenges Lidl faces as it expands from its present total of 37 stores to 100 by next year?

Please practice The RetailWire Golden Rule when submitting your comments.
Braintrust
"The biggest challenge I see (even if Lidl corrects its initial mistakes) is the huge head start that Aldi has already established in the same niche."

"The other consideration is, where does their growth come from"

"I have always been skeptical of the hype surrounding Lidl."

The reporting by the Wall Street Journal immediately brought the Tesco fiasco to mind, but it’s too early to judge whether Lidl can make corrections fast enough to thrive. It’s a big company with a strong track record of success in Europe, but the U.S. is a different and more complex market.

The biggest challenge I see (even if Lidl corrects its initial mistakes) is the huge head start that Aldi has already established in the same niche. Here in southeastern Wisconsin there are well over 20 Aldi stores (along with a few Trader Joe’s locations), giving Aldi critical mass to do brand-building TV advertising, and to build an efficient supply chain. Assuming Lidl gets its merchandising act together, it still has a lot of catching up to do.

Yes, you’re right that Aldi has a huge advantage in terms of presence. Howerver, Lidl does seem to have a potential advantage (a la Alexander Gerschenkron’s “economic advantages of backwardness”) in terms of presenting hard discounting in a better package in more central locations. Most Aldi locations are in economically lagging areas. And the buildings are dowdy — their stock design, even though they are investing in interior improvements.

Lidl buildings look more design forward, and they could focus on inner suburban and urban locations, maybe being a Trader Joe’s version of hard discounting vis a vis Aldi (and Save A Lot stores, which tend to be exceptionally grim).

But we don’t see necessarily that kind of store location strategy being undertaken by Lidl and that could cost them.

I think the question to ask is, what will Lidl provide customers that’s different than it’s competition?

How many times do we say that price alone will not let a business win long-term when all your competitors are selling the same products at the same low price? What is your company doing different that provides an experience appealing to customers? That’s what matters, and I don’t know if Lidl has identified that. All I have read in the last several months was how Lidl was going to open stores and go into deep discounting. Well apparently their competitors are competing just fine with them on price so why should customers shop them? Lidl has to figure out how to compete with something customers will respond to favorably. That’s how they’ll win, and if not, I don’t see them having much long-term success.

What we do know is they are under-performing. They have picked poor locations in order to get a large number of sites. They are trying to do in just a few years what it has taken Aldi 40 years to do. Aldi figured out in the 1990s that success is just being in Walmart’s parking lot. Lidl relied on real estate brokers, not really the brightest bulbs when it comes to site selection.

It is unlikely that Lidl will be as bad as Tesco’s Fresh & Easy. Both went about opening the wrong way. Lots of stores and lots of bad locations with no meaningful research. Why not just open one first in a good location and see how it works? Aldi is expanding rapidly but they have 40 more years of experience in the U.S. and know a thing or two about site selection.

I have always been skeptical of the hype surrounding Lidl. Indeed, I know quite a few locations where Aldi has opened where its stores are performing badly. In other words, the deep-discount model is not a panacea for success.

Why is this? Several reasons. First, the pricing differential is not always that great — or not great enough to justify switching or traveling a long distance. Second, a large number of consumers dislike the relatively narrow range. Third, poor customer service is an issue in some stores. Fourth, the locations of some of the Lidl and Aldi stores is sub-optimal — much more for the former than the latter.

I don’t think Lidl will go the way of Tesco, but cracking the U.S. won’t be a walk in the park either.

Our local Lidl opened a couple of weeks ago. It is mobbed and the local buzz is generally very positive. The location is in a growing area with high traffic about a mile from an Aldi and Publix. I have been shocked at their inability to keep the store stocked. Granted they have been super busy, but they should have been prepared for that. I have not been impressed with many of the employees. They seem less friendly than I am used to at Publix, especially what look to be the managers! I know they have avoided hiring older part-time labor (like I frequently see in the home improvement stores) in favor of green entry-level folks. They have lots of good items to attract the more affluent customer compared to Aldi, but they are no Trader Joe’s. It’s fine to carry a 90 cent can of organic kidney beans for those who want them, but give me a 60 cent can of regular beans for my chili. The hard goods are a pleasant surprise, but… Read more »
2
|
-1
-   Share

There are a number of factors any grocery brand needs to account for in this highly competitive US market. Price is just one. Product assortment, associate knowledge and friendliness, store layout, store location — and let’s not forget the overall shopping experience — are others perhaps even more important than price. Lidl had buzz when their stores first opened, which drove curiosity shoppers to their doors. That won’t sustain foot traffic for long, however. Based on their location, many of their stores may be asking customers to drive further to reach them. Grocery shoppers won’t do that without a more compelling reason than price. In fact, in some places, the opposite may be true, where the experience and/or product mix may cause people to drive further and pay a premium. Trader Joe’s and Wegman’s are brands that come to mind in this category. While both may offer great prices in some products, it’s not necessarily why shoppers frequent them! Lidl needs to understand who their customers are and adjust to accommodate them in areas besides… Read more »
1
|
0
-   Share

If Aldi can succeed, there is no reason Lidl cannot. They have very similar business fundamentals, they originate from the German mindset of enduring family owned businesses rather than pressed for shorter term stock returns as in the case of Tesco with Fresh & Easy. Lidl may not get it right the first time, but they will tweak the approach, apply rigor and discipline to find the adaptions that work for the local markets within an already successful approach. Underestimate them at your peril!

In order to succeed — or, more on point, avoid the F&E experience — Lidl will need to avoid the mistakes the former made (with regard to location, branding, product mix, etc.) and also have sufficient patience to give the stores a chance to work. Oh yes, the big one: the idea has to be able to work, whether the country needs another house brand hard discounter is not particularly obvious.
I wish them well.

I followed F&E from afar. As a center city proponent, I expected Tesco to make F&E a city-focused concept given their European roots. Obviously they didn’t go in that direction. Interestingly, Ahold’s bfresh concept could be considered a more finely tuned F&E, decidedly focused on center city-like locations.

The issue of whether or not “the country needs another house brand hard discounter” is actually open. Aldi is great for staples and produce and products that have universal recipes (mustard, mayo, etc.). Their own-brand products mostly aren’t worth purchasing a second time with some exceptions (hummus, they seem to have finally introduced a decent tortilla chip).

Plus their stores aren’t very fun. Lidl could deliver an attractive store and truly quality private brand products, in better locations, and would do fine.

The other consideration is, where does their growth come from? Basically, a handful of players control over 70% of the market. Clearly, Walmart wont give an inch on price, assortment, omnichannel etc. The larger players such as Kroger, ALB, Costco, Publix, HEB etc. have all advantages in their respective markets. It’s likely the rest of the top 50 US will see the most erosion, unless of course you’re a Wegmans type operator with substantial loyalty moats.

Braintrust
"The biggest challenge I see (even if Lidl corrects its initial mistakes) is the huge head start that Aldi has already established in the same niche."

"The other consideration is, where does their growth come from"

"I have always been skeptical of the hype surrounding Lidl."