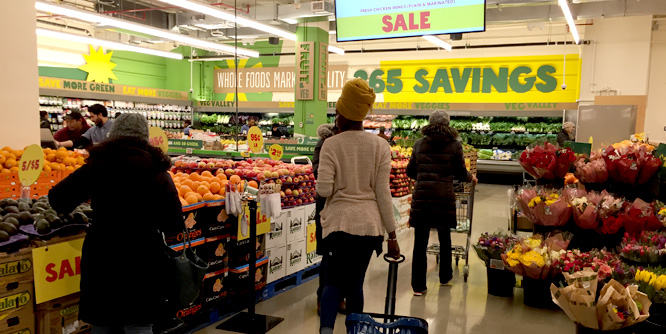 Whole Foods Market will not be opening any new 365 stores because management believes the recent price cuts instituted since Amazon.com’s acquisition of the grocer have made its namesake locations more price competitive.

Seen aimed at Millennials, the first 365 opened in May 2016 with the smaller format focused on Whole Foods’ private label and a no-frills design to pack more value for consumers. The format was conceived as part of Whole Foods battle against its “Wholesale Paycheck” reputation.

In an internal memo acquired by Yahoo Finance, Business Insider and other outlets that details the expansion halt, Whole Foods’ CEO John Mackey wrote that the initial goal of 365 was to “create a more value-focused and streamlined shopping experience that maintained the integrity of Whole Foods’ quality in a convenient format that’s less expensive to build and operate.”

Earlier last year as 365 opened its first location on the East Coast in Brooklyn, speculation ensued that the smaller concept could open inside Kohl’s locations as Amazon deepened its relationship with the chain.

“As we have been consistently lowering prices in our Whole Foods Market stores over the past year, the price distinction between the two brands has become less relevant,” wrote Mr. Mackey. “We believe that the price gap will further diminish.”

Analysis by some Wall Street firms has found overall prices at Whole Foods have mostly remained the same, although surveys show that consumers perceive they’ve improved under Amazon’s ownership.

The 12 Whole Foods 365 locations will stay in business and transition to being led by local regions, according to the company memo.

Reports arrived at the close of last year that a national expansion of Whole Foods is being planned in part to support Amazon Prime’s growth. The company will also add more of its smaller format AmazonGo convenience stores, but Whole Foods has indicated these moves played no role in the 365 decision.

DISCUSSION QUESTIONS: Do you approve of the decision by Whole Foods Market to end the expansion of its 365 store concept? Does the move signal a change in Amazon’s intentions about its grocery business?

Please practice The RetailWire Golden Rule when submitting your comments.
Braintrust
"The 365 stores were created to counteract the perception that Whole Foods prices were too high. Amazon’s ownership of the chain has turned that perception around..."

"I think this decision falls into the confirmation of the obvious folder. If cost were the major issue, those shoppers would never have been in Whole Foods — then or now."

"It’s a good decision, given that it’s a second branding that didn’t see rapid adoption or scalable success. "

At the end of the day, there were two keys to 365: differentiation and relevancy. The 365 concept was not that different from Whole Foods except for some SKUs and pricing. With all of the advances in omnichannel food retailing, 365 was also not that relevant for a target audience of Millennials. If there is one thing that Amazon does better than anything else it is test and measure. 365 simply did not measure up. With the advances of Walmart and grocery chains, Amazon has bigger fish to fry.

I never thought Millennials were looking for a cheaper, more streamlined new store like 365 wanted to be. For that, we have Aldi. I’m glad to see a full-service high-quality Whole Foods with a great assortment across wider range of price points. One building can serve shoppers across many varied income levels. Amazon should now concentrate on expansion in geographic areas where there is less competition and a diverse range of shoppers!

This makes sense given the pricing strategy by Amazon for Whole Foods stores. There’s no change to Amazon’s intention on its grocery business: to gain market share by better use of physical assets and increasing the value of Prime membership programs.

I don’t think it will make a significant difference in the long term. Whether it is a false perception, or just that we do use our Prime membership at checkout — which provides additional discounts, my impression is that they have lowered prices. Would I like them to be lower? Yes, and I hope they do decide to go further across more products and categories to better compete with other well stocked stores that also carry a large selection of organic and “better for you” products and produce, such as Fairway Stores, especially their newest store in Chelsea.

They should, however, continue to add 365 products in more categories. That should eliminate any gap that may be felt due to the decision to not go any further with the 365 Store concept.

The 365 stores were created to counteract the perception that Whole Foods prices were too high. Amazon’s ownership of the chain has turned that perception around, and as we all know, in retail perception is reality. Why would Amazon move forward with a concept that no longer makes sense?

I agree with Anne Howe. I think this decision falls into the confirmation of the obvious folder. If cost were the major issue, those shoppers would never have been in Whole Foods — then or now. The promise of Whole Foods was — and is — about many things from freshness to health, but it’s never been about price. People expect to pay more for better products, or products they perceive as better. Even if Amazon hadn’t bought them I think the format would have struggled.

As a weekly WF shopper, I noticed rather quickly in the 365s I visited that other than some of the perimeter items, there wasn’t a lot of difference between the two concepts. Yeah, the design was scaled down, but the center aisles were essentially the same product and price. So, what was the point? If your new concept is more than two thirds of your old one, you need to re-think that, IMO. A much more scaled down version was what I was expecting and I know I’m not alone.

In any case, the new strategy of more WF stores as a piece of this news is really the right way to go in my book. Way under leveraged. Close 365, roll out WFs: win-win.

It’s a good decision, given that it’s a second branding that didn’t see rapid adoption or scalable success. Managing two brands with opposite characteristics under the same umbrella is challenging. WF will continue to struggle with the “whole paycheck” issue, even under the auspices of Amazon — primarily because most products at WF remain more expensive. The only way to address this is by adding value, not reducing price — which is what Amazon is shooting for with Prime, etc.

What I read here is “Whole Foods attempts a new type of store, it didn’t work, so they aren’t pursuing it further.”

Got to give kudos to the Amazon PR team for redirecting the conversation into a claim that their minor price drops (from what I’ve read) have entirely changed customer perception.

Do I approve of the change? Yes. Major retailers have all found it difficult to succeed at these new store concepts. No surprise that Whole Foods finds the same.

Does it signal an intention about Amazon? I don’t think so. Amazon has rattled their saber for a decade about grocery without making a breakthrough. No particular reason to think they’ve sorted it out now.

As a rule — and I can’t even imagine an exception — expansion should be done “thoughtfully”; “pause and evaluate” seems a natural part of that thoughtfulness.

But getting back to the specifics, and the question we’re all thinking — was this a good idea in the first place? Brand expansion is often risky as it can lead to brand dilution or confusion (Whole Foods recognized this by giving the concept a different name). But whether the concept can work, or it can but won’t be allowed to because WF is now merely (yet another) Jeff Bezos’ play toy, I don’t know.

365 was the answer to Aldi, Lidl and Trader Joe’s. Why didn’t the concept work better? Private label in the USA market trails Europe and Canada. In other markets it is a smart rather than a compromise purchase. 365 is on Amazon’s radar screen. It is one of the reasons Amazon bought WF. The interesting question is what are they going to do with 365 the label — not the store.

The overall strategy for Amazon in acquiring Whole Foods, I believe, is to create additional physical outlets for their shipments and e-commerce brands, add value for Prime members and grow membership by attracting Whole Foods customers, who resemble Prime best customers to a large extent. Maintaining and potentially expanding small footprint locations where appropriate seems to fulfill those goals as well as larger stores do. I would bet small format stores remain part of the strategy, just not under the 365 brand.

Braintrust
"The 365 stores were created to counteract the perception that Whole Foods prices were too high. Amazon’s ownership of the chain has turned that perception around..."

"I think this decision falls into the confirmation of the obvious folder. If cost were the major issue, those shoppers would never have been in Whole Foods — then or now."

"It’s a good decision, given that it’s a second branding that didn’t see rapid adoption or scalable success. "