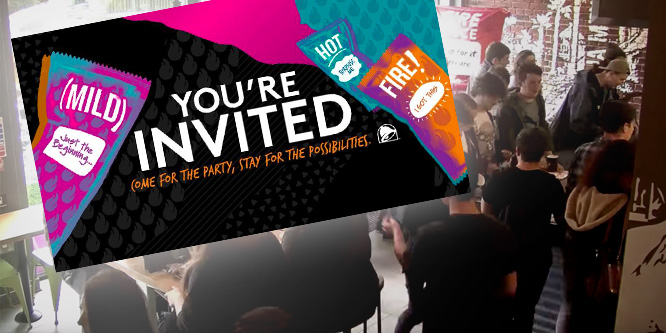 Over two days in the last week, for instance, four Taco Bells in the Indianapolis area offered free Nacho Fries and Watermelon Freezes, games and on-the-spot job interviews. The goal, according to a release, was hiring “dozens of great candidates over the course of just a few days.”

The hiring parties builds on Taco Bell’s launch in 2016 of its “Start with Us, Stay with Us” initiative that includes education and career-building programs for employees. The goal to hire 100,000 new employees to support its expansion plans was set in 2017.

As noted by QSR Magazine, Taco Bell’s hiring parties come as the nation’s unemployment rate in May reached its lowest rate since December 2000 during the dot-com years.

Dutch Bros, a drive-through coffee chain with over 300 stores in the western states, occasionally hosts hiring parties featuring music and games while applicants wait to be interviewed.

Lush, the cosmetics retailers, hosts a “Hiring Party” for prospective employees that teaches applicants about product ingredients, stories and uses, demonstrates the products on them, and then asks applicants to try demonstrating the products for their interviewees. After that, management conducts brief one-on-one interviews. If they pass the first round, applicants are invited to a “Culture Hour” for higher-level interviews to see if they’re the right fit.

Following the demise of Toys “R” Us, Main Event Entertainment, which operates 41 family entertainment centers across the U.S., hosted a Play & Apply hiring event that provided former Toys “R” Us employees with FUNcards to try games after being interviewed.

“With the recent closures of Toys ‘R’ Us and Babies ‘R’ Us, we saw an opportunity to turn a challenging situation into something positive for the retail brand’s talented employees,” said Rhonda Merchant, director of talent acquisition at Main Event Entertainment.

DISCUSSION QUESTIONS: Are hiring parties worth the expense and effort vs. conducting typical hiring calls? Have you seen any innovative approaches retailers use for hiring events?

Please practice The RetailWire Golden Rule when submitting your comments.
Braintrust
"With so many options to choose from, potential employees will be taking a harder look at the benefits and the company culture."

"The “start with us stay with us” is a great slogan, I’m sure they’ll continue to innovate around that."

"Offer stability and your business will be stronger, with or without parties. It’s really not that hard!"

All of this reflects a very tight labor market which means retailers — and other businesses — are finding it hard to recruit and retain people. Hiring parties are not a bad idea, but long-term success comes from treating employees well and creating a culture which is attractive.

As a case in point, In-N-Out Burger has little difficulty in hiring. Its pay rates are well above average, its benefits are excellent, and it encourages and helps all employees to advance within the company if they want to. Culture is also good with a clear mission and a strong management team that communicates well.

Create a great experience for the candidates and they’ll show up — just like customers. We know lots of retailers who have completely reworked how they attract and interview candidates and it’s paying off in finding better candidates … and ones who fit the company culture much better.

Retailers often forget that they model what customer service means to the culture when they hire people. I applaud the hiring parties as long as they are organic to the culture. The “start with us stay with us” is a great slogan, I’m sure they’ll continue to innovate around that. Great lessons for any business — you get back what you give out.

The logical extension of creating an experience in-store is to create a “hiring experience.” Apple’s success has been based upon “hiring for smiles” and teaching the employees the technology. If retailers are going to create a better experience in-store, they need to select staff who can engage. Hiring parties can help employers find staff with the right profiles, give applicants an appreciation for both the job and culture and create an additional win by engaging current staff in the culture and values as they help with the hiring party. Nothing is more expensive than a “bad hire.”

Hiring parties can be more efficient than the traditional process. However, with today’s low unemployment rate retailers need to look beyond hiring strategies into their benefits and employee retention. It’s an employee’s market right now. With so many options to choose from, potential employees will be taking a harder look at the benefits and the company culture.

Logged in to agree. Maybe parties work for Taco Bell, but in general fair, livable wages and great benefits set an employer apart and increase loyalty and retention for retailers who offer them. (There’s also evidence that guaranteeing a predictable schedule increases productivity and sales, which, by the way, is easier to manage if you’re measuring foot traffic trends.)

Offer stability and your business will be stronger, with or without parties. It’s really not that hard!

Hiring parties also serve as community marketing events and provide profile opportunities to suppliers and partners. Reducing hiring costs is a tangible measure of value, but increased store traffic over a period and the value of positive media generated should be factored in as well. Improving relations with local health and government officials through a hiring party is an added bonus.

This is absolutely a great way to approach the hiring process. Hiring processes in general are horrible transactional experiences likely having no resemblance to the actual or desired employee working experience. Hiring parties or any similar effort to provide an experience that is congruent with the culture of the company are effective in ensuring candidates know what they’re signing up for, and for the company to better assess whether a candidate is going to be a good fit for strengthening the company’s desired culture.

Doing this should have nothing to do with the tight labor market, but rather is a smart way for employers to engage with the growing experience-oriented Millennial and Gen Z populations of job seekers.

I always disliked interviewing. It was like the interviewee had the “How to Interview” book in their back pocket. Rarely did you see the real person in this stilted environment. As often as I could, I got them out of the “across the desk” situation to better find out what they were all about.

The idea of the hiring party does just that. It surfaces the real person and how they might fit in the organization. Cultural fit, per Bob Phibbs, is paramount.

Brilliant idea. However the key is not just hiring, but retaining who you hire. As much fun as a “party” might be, it’s important for people to get the feel for the culture. We don’t want to give them culture shock and have them leave when they find out the job isn’t as much fun as a party. All that said, the party is the first phase of getting good people into the funnel. Then the real work begins. Get the candidate to understand their job, what they can expect, etc. I love this idea.

Hiring parties work, but they require the retailer to really work and watch people, their attitudes and their interactions with other candidates when they know they are not in the formal interview scope, because that is what you will get. Lush has it right, those people are obviously working hard in the interactive informal first interview process.

As we discussed in the past, the first challenge is to drive brand awareness, loyalty and value. A major global retailer (and manufacturer) that we all know has done this. When they opened their store in NYC years ago, 3,000 lined up outside the store to apply for 400 openings.

But yes, events like those mentioned in the article are definitely worthwhile.

I think there is a way to do this well. Cap the number of attendees, and perhaps screen them based on a written response, or a 60 second video explaining why they’d be a good fit, and why they identify with the brand. A party with free food will attract warm bodies, but if physical retail wants to being attracting coachable human beings that won’t be replaced by kiosks and automation, they need to begin setting that standard.

Hiring parties can be a great creative way to attract new talent. With unemployment rates low, retailers have to fight harder to attract the talented people they want to hire. However, hiring is just the beginning of the battle! Retailers have to focus on retention as much as hiring and ensure they have a corporate culture that fosters positive feedback and growth for all of their employees. This is true for just about any business today in such a competitive labor market. We’ve all heard the expression, “culture eats strategy for breakfast” and that starts with the hiring process and continues throughout the entire employment lifetime! And that encompasses wages, benefits, and general culture — all are equally important to most employees!

I think it’s great to create a relaxed, comfortable environment so that candidates can be at their best, but this seems a bit extreme. If a potential hire is just showing up for the free food and games, do you really think they are seriously interested in a job? Maybe a better option would be hosting an event with an influencer or a networking event where people interested in your company or cause would attend. Then have a soft sell about the company and employment opportunities. The event has to align with the brand to attract the right people, then you go from there.

Braintrust
"With so many options to choose from, potential employees will be taking a harder look at the benefits and the company culture."

"The “start with us stay with us” is a great slogan, I’m sure they’ll continue to innovate around that."

"Offer stability and your business will be stronger, with or without parties. It’s really not that hard!"