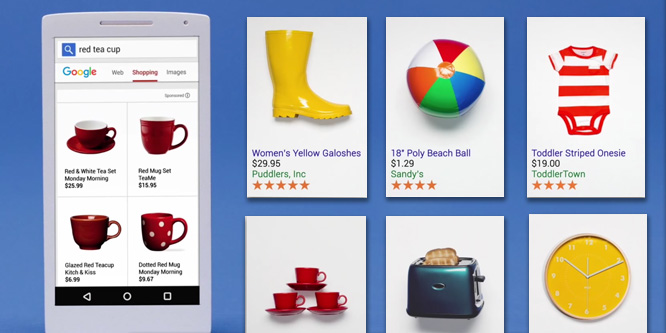 Google is making it easier for retailers and brands to get their ads out on some of the media giant’s most popular platforms, and it’s using Shopify to do it.

Google is rolling out a suite of tools that allow retailers to buy ads directly through Shopify and display them in places like Google’s search interface, Google Maps and YouTube, according to Bloomberg. The main tool is replacing the need to set up and track individual ad campaigns on each Google service. Other commerce-related tools Google is launching include one that enhances the keyword relevance of brands’ ads and increases click-throughs and a tool meant to push foot traffic to stores via online ads.

The move by Google to increase its focus on facilitating advertising for brands and retailers comes as Amazon.com has made big inroads into digital advertising. Last year, eMarketer estimated that Amazon would own 10 percent of the share of digital advertising industry’s spend by 2020, a jump from 3.5 percent in 2016. And some brands have reported significantly greater success promoting through Amazon Sponsored Products than through Google Adwords.

Shopify’s collaboration with Google looks like another instance of big players picking sides to stake out territory against Amazon. Shopify’s widely-used all-in-one e-commerce platform allows stores to build their own e-commerce presences. While Amazon shut down its competitive tool, Amazon Webstore, years ago, standalone online storefronts position businesses to work outside of the Amazon Marketplace.

Digital advertising isn’t the only area in which Google has been shoring up competition against Amazon. In voice commerce, Google and Walmart partnered last year to offer thousands of products through Google Home.

DISCUSSION QUESTIONS: Do the new Shopify-based tools for advertising through Google make a compelling enough case for shifting ad spend from Amazon back to Google? Will this partnership impede Amazon as it pursues greater dominance of the digital advertising landscape?

Please practice The RetailWire Golden Rule when submitting your comments.
Braintrust
"At the end of the day the most compelling case for shifting ad spend is results."

"More money for Google, yes. More spending on digital commerce platforms at large, yes. Harm to Amazon? I doubt it..."

"Home-based shopping seems poised for big growth, so Google is doing the right things to get its overall share of voice-activated commerce."

Results count — everything else is conversation. Google’s model is based upon ad revenue so it behooves them to find tools and partnerships that make it easier for advertisers. Shopify-based tools would seem to make a great deal of sense if they simplify the process of placing and managing ads through Google. At the end of the day the most compelling case for shifting ad spend is results.

Marketers should spread their advertising dollars across a variety of platforms. Google and Amazon both draw large numbers of visitors. By strategically spending on both, brands can better reach their target demographics. The Shopify/Google alliance will impact Amazon, but it doesn’t make Google the end-all and be-all in digital advertising.

Madison Avenue media planners and buyers always like something new and a better ability to negotiate with current advertising options. More money for Google, yes. More spending on digital commerce platforms at large, yes. Harm to Amazon? I doubt it, because the game is still about the size of the overall pie, not the slices.

Home-based shopping seems poised for big growth, so Google is doing the right things to get its overall share of voice-activated commerce. Home Depot is playing it smart to connect with Google Home early as well, as Amazon continues to develop private brands in the home improvement category.

I am not sure if the teaming up of Google and Shopify in this way actually solves a real problem. I don’t think the core issue for the hundreds of thousands small mom and pop stores on Shopify to advertise on Google is the difficulty of using Google Adwords or its lack of connection to their e-commerce system. The issue is budget, skill, tracking ROI and all of the other challenges. Some do it great and for many it is a challenge.

For the larger Shopify Plus like clients I don’t think they need this integration since they already run in house or via agencies and media buyers fairly sophisticated digital advertising programs on Google and others. I do however see great opportunity for an overall more streamlined and connected Google advertising platform as the disconnect between some of the services was a challenge and I think Amazon’s and Facebook’s entry into the marketplace was the kick in the rear that Google needed to step their game up.

Braintrust
"At the end of the day the most compelling case for shifting ad spend is results."

"More money for Google, yes. More spending on digital commerce platforms at large, yes. Harm to Amazon? I doubt it..."

"Home-based shopping seems poised for big growth, so Google is doing the right things to get its overall share of voice-activated commerce."