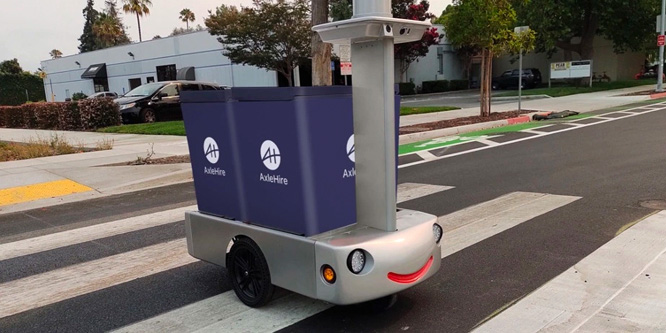 A number of grocery stores and tech vendors have piloted delivery robots over the last few years, some autonomous, some remote controlled. Now one company is looking at the convenience store space as the sweet spot.

Robotics startup Tortoise is expanding its footprint and will be furnishing 500 convenience stores nationwide with remote control delivery robots to facilitate same-day, last-mile delivery, according to TechCrunch. The company’s delivery robots have already been leveraged, through partnerships, with grocery store chain ShopRite and tech-savvy hybrid grocer/convenience store Choice Market in Denver, CO.

Hi! Tortoise is as at the @NACSonline conference in Chicago this week. We just announced the largest delivery robot purchase ever – 500 Tortoise robots going to KRS convenience retailers!!!! Drop us a DM to meet up. pic.twitter.com/yV80wapkD0

The shift toward home delivery represents a pivot for the startup. Tortoise began as a robotic alternative to the motorized delivery scooters which grew popular in major U.S. cities in the summers leading up to the pandemic. The tech firm launched a pilot of its remote-controlled delivery robots in conjunction with Albertsons earlier this year.

Customer demand for delivery has grown across retail sectors in recent years with online grocery ordering experiencing an unprecedented spike at the beginning of the pandemic. Studies show that the convenience store space has been as impacted by increased demand, as well.

A study from late 2020 by NACS Research found that 57 percent of stores in the convenience space offer some sort of last-mile fulfillment (including delivery and/or various pickup options), and that the stores that offer such services experience great benefits from doing so.

At least one of the major delivery players has begun looking at convenience stores as a space it can own. DoorDash recently launched a virtual convenience store called DashMart, which features 2,000 grocery items and restaurant-branded items and promises delivery in 30 minutes or less.

Delivery robots have continued to raise concerns, however, in some municipalities as to their impact on jobs and also their potential to be public safety hazards. At the same time, however, more effective use cases have been emerging for the robots. A growing number of college campuses are leveraging robots for food delivery to dorms, as an example. Last month, Grubhub announced that it would be delivering food on the Ohio State University campus by robot, according to Thrillist.

DISCUSSION QUESTIONS: How useful do you see robots, either remote controlled or autonomous, being for convenience stores now or in the near future? Are there aspects of convenience retailing that make it a better use case than grocery stores or other types of retail outlets?

This is coming fast, and I don’t think the public is ready for it quite yet. Convenience is only one category that could potentially leverage autonomous delivery, but broad public acceptance will be a challenge. As noted, safety issues are a serious concern – what happens when the streets/sidewalks are teaming with autonomous robots from all kinds of places? Chaos if it is not controlled. This domain is growing fast, and municipalities will need to take the lead on how to best regulate.

Wait — convenience store online order? Is that an oxymoron, or what? Isn’t it “convenient” because A.) it’s close by and B.) I can just run in and get something? I am all for testing the most outside-the-box stuff, but this? Gotta draw the line somewhere.

A valid point to consider!

Delivery robots are well-suited to convenience stores, which consumers tend to use for essential items that are needed quickly. Unless they charge a premium or a full delivery fee, those stores often don’t have the volumes or margins to make last-mile delivery particularly profitable. Robotic delivery helps with this and, indeed, automated delivery more widely is a solution desperately needed to help resolve the cost conundrum of grocery fulfillment. That said, these robots are clearly suited to high density, urban areas due to their limited range and slower speeds.

Robotic delivery in controlled areas like college campuses may make sense, but I can’t imagine it in cities, and certainly not in suburbs or rural areas. And what are the parameters? Would a c-store deliver a $1.50 cup of coffee?

As Lee Peterson says, it seems surprising that “convenience” stores, by definition being conveniently located near their target customers, would have high demand for delivery but apparently the data indicates just that. And in certain use cases, like densely populated urban neighborhoods and college campuses, I think robots could in fact be very efficient and effective (assuming they can safely navigate crowded sidewalks, of course).

As a matter of practical experience, c-stores would be an ideal target for robot delivery simply due to how their model operates — higher number of transactions on fewer items purchased per shopper. The average customer going to a c-store buys gas, walks in, purchases a drink, a fresh food item, a lotto ticket and maybe some cigarettes. They’re in, they’re out — back in the car in a flash. Turning this into a last-mile delivery transaction via robot (minus the fuel), makes perfect sense since the size and weight of ordered items is quite small. For these stores surrounding college campuses, it’s a no-brainer!

Retailers are in a food fight to lead with speed. In the near future, ultra-fast grocery delivery will be commonplace. Now c-stores need robots to keep their convenience advantage.

Domo Arigato, Mr. Roboto. Shoppers will take convenience however they can get it these days. However the days of robots roaming the streets and the sky are not quite here yet. There will be many hurdles to come, but I say, “bring it!”

I love this, but I think Tortoise has a long way to go!
Boston Dynamics’ Atlas prototype and currently available Spot robot seem much more like the generation of tech needed to solve the really hard problem of real world terrain navigation. Combining the sensory advancements that have been made to enable self driving cars to observe traffic conditions and laws would be the next step.

The nice thing about a “Spot” is it can work 24/7, so the economics begin to make more sense when they can be deployed to do whatever work is needed around the clock (stock shelves, manage the stockroom, clean the parking lot/retrieve carts and do deliveries). We’re not that far off when you consider how far robotics has come!

Robots are an amazing phenomenon. They are in the dreamworlds of every Gen Xer and most Millennials. But they aren’t ready for prime time, except maybe prime time television. The challenges with robotics are tied to inserting repetitive technology into unique scenarios. 1.) Social acceptance – liabilities and patterns haven’t yet formed around acceptable use cases and whether robotics can take over the last mile. Even basic municipal rules on whether a robotic device, uncontrolled or controlled, can cross a street are unclear. Not that everything has to be established up front, but when the car crashes into a robot somebody’s paying for it. 2.) Profitability – until then the tipping point for robotics will elude us. There is little conclusive proof that this kind of robotic delivery capability will translate into cost savings (or ROI) in last-mile delivery, though some examples exist. C-store will be the least profitable option due to smaller basket sizes. Can a one mile trek with (or without) human oversight be justified for two candy bars and a sandwich? 3.)… Read more »
1
|
0
-   Share

Robots have to earn their place in the retail business. Robots for c-stores may be a bridge too far. They are not needed for the products that these stores stock, and the cost may be prohibitive. But testing is always good and may prove me wrong.

Delivery robots seem at best an upscale suburban community phenomenon because they will either be unworkable (a rural setting) or prone to damage or theft (urban areas). They seem more novelty than viable delivery option.

Adapt or perish. Automated delivery systems, from cradle to grave, are the wave of both the present and the future. Regardless of the public accepting this or not, it is largely inconsequential if a pair of human hands or a robot delivers your products, so long as it is fast, inexpensive and accurate. Robots check all of the boxes, and our AI is just getting better every day!