Would Lumber Liquidators floor customers with a new name? 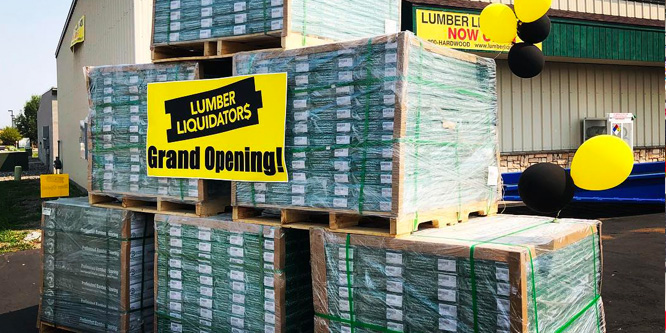 What’s in a name? For a retailer like Lumber Liquidators, the answer is: baggage. That is why analysts are encouraging the chain to dump its familiar moniker in pursuit of a fresh start.

While Lumber Liquidators is already in the midst of a rebranding, a recent stock downgrade and corresponding slide in share price have led analysts to suggest the affordable flooring retailer ditch its name and begin undertaking a more drastic transformation strategy, according to an article on MarketWatch.

Intensified competition from both direct competitors in flooring and adjacent categories like home improvement are part of the reason for the chain’s current woes. Experts, however, argue the bigger problem is that the chain never bounced back from a massive wave of bad press in 2015 surrounding a scandal that branded the company’s product a public health threat.

Consumer skepticism over the chain began with a scathing 2015 expose on “60 Minutes”, which accused Lumber Liquidators of selling Chinese-made laminate flooring that contained formaldehyde in levels that exceeded California’s CARB 2 standard for toxicity by some order of magnitude. In that report, the television show’s reporters went undercover at three Chinese mills that supplied Lumber Liquidators with product. Mill employees admitted openly to mislabeling their product as CARB 2 compliant to keep costs down. The chain stated that the bad press was motivated by profit-driven short-sellers and lawyers. In the wake of the report, U.S. Sen. Bill Nelson (Dem.) of the Senate Committee on Commerce, Science and Transportation called for an investigation into the company from a few federal regulatory bodies.

In March of 2019, Lumber Liquidators was charged with fraud by the Securities and Exchange Commission (SEC) over statements made in response to the “60 Minutes” segment. The chain told the public that it had conducted third-party testing, which demonstrated that its suppliers complied with formaldehyde emissions standards.  In fact, the chain knew its largest supplier had failed such third-party tests.

The retailer also experienced a recent cybersecurity incident consisting of a malware attack, resulting in an estimated $6 million to $8 million in damages, according to its third-quarter financial report.

DISCUSSION QUESTIONS: Given the scope of Lumber Liquidators’ issues, is a name change a realistic solution to the problem? What form of transformation, other than or in addition to a name change, might enable the retailer to begin a turnaround?

Please practice The RetailWire Golden Rule when submitting your comments.
Braintrust
"I think Lumber Liquidators should keep its name but begin to re-emphasize its roots, which way pre-date any crises."

"Rebranding is not the solution. Every brand has some baggage — I recommend LL focus on implementing and promoting better practices, and connecting with customers."

"Gulp – I just bought my new floors from there! That said, not a single person mentioned problems when I said where we got it."

15 Comments on "Would Lumber Liquidators floor customers with a new name?"

Full disclosure, I worked with Lumber Liquidators and their team for a number of years before the 60 Minutes scandal. One of the things that the founder was relentlessly focused on was building that brand name with a simple message: Hardwood flooring for less. With so many original players gone who built the brand before it was gobsmacked on 60 Minutes, I still would not counsel getting rid of the name. Millions of people found LL to be a trusted name, needing to attract those customers to something unknown could be a major mistake as homeowners try to fix up those properties again or cash out and retire.

Gulp – I just bought my new floors from there! That said, not a single person mentioned problems when I said where we got it. I don’t think they are being blamed that much for the bad product as much as the Chinese are. We did our best to make sure the product was not made there, though.

I think Lumber Liquidators should keep its name but begin to re-emphasize its roots, which way pre-date any crises. When I worked for Big Party/iParty, our headquarters were in the basement of Store #1. There was an outbuilding on the property that we used to rent to–Lumber Liquidators. The head of the company was a really nice guy, had a German Shepherd as his constant companion and the company definitely was true to its word; money was saved at every step of the way. I believe he is back running the company again. But rebranding? To my knowledge, the company that put up Chinese drywall containing some kind of toxic chemical all over South Florida never changed its name (Might have been Toll Brothers, but I’m not sure). They just fixed the problem, which was actually quite a big deal, and moved on. The “repair” consisted of first checking behind the wall to see if the copper pipes had changed color (the first sign of the problem), and then replacing all the drywall in the… Read more »
3
|
0
-   Share

Yes, Tom, the founder came back during the crisis to right the ship and then left. To my knowledge, he now is no longer associated with LL. His whole story of how he founded and built the company is a great American success story.

Ah, sorry he’s gone. Really a nice, nice guy, They oughta bring him back as a spokesman, unless he’s off on an island somewhere.

I am not a big fan of name changes. A rose by any other name would smell as sweet and a skunk just as badly. Many people and businesses have recovered from poor behavior and have come to redeem themselves. The answer lies in how one portrays oneself to one’s audience and customers. Retail software developer (and mostly acquirer) JDA just changed its name to Blue Yonder. Good luck with that!

The name is an established name already. If it was still a problem, radio shows would not be using it as a prominent sponsor. I think most have moved past the 60 Minutes expose.

Rebranding is great. Unless it is accompanied by eschewing unethical/sloppy business practices, though, it won’t go too far.

While I don’t think “Lumber Liquidators” is particularly synonymous with flooring, nor is it highly resonant with younger flooring buyers, I just don’t think a name change is the answer here. The hard costs of making all the physical changes are extremely high, and that is before all the money you have to spend actually building the new brand. I would recommend rather that they stay the course with their name and increase both the supplier diligence and the transparency of that diligence. I would then spend a fraction of that re-naming money on re-labeling practices. Expose the processes and standards by which you evaluate all suppliers, and invest in labeling that tells consumers exactly what they are buying. Radical transparency will help rebuild trust.

I would like to see an analysis that conclusively shows the name still carries baggage from the 2015 issues and that this deters customers. Personally, I am skeptical that it does in any meaningful way. That also means I am skeptical that a name change would resolve all of the company’s issues. Lumber Liquidators does need to compete more effectively in the market, but I don’t think a name change is at the heart of this.

Rebranding is a mixed bag. People who find the current brand troublesome and refuse to buy from them will inevitably track the rebranding and know that the new name is really the same company they protested previously. Consumers who don’t remember all the PR issues aren’t going to have an issue buying form the brand today, so why would this change with a new brand? It’s doubtful this would have any material impact other than pleasing financial analysts. Brands that successfully rebrand are typically in a position where few people know the current brand, sales are poor, markets don’t respond to them, and therefore a new brand becomes an opportunity to create significant buzz. That doesn’t seem to be the position Lumber Liquidators is in right now. I don’t believe rebranding is something they need.

Rebranding is a difficult and very expensive path to take. Fixing the issues and then leveraging and protecting the brand is likely going to yield better results.

Rebranding is not the solution. Every brand has some baggage — I recommend LL focus on implementing and promoting better practices, and connecting with customers.

And when people find out it’s the same toxins, different name, then what? Clearly this company had the biggest trust issue possible … which they failed by abusing it. Step ONE is to clean up their act — figuratively and literally. Step two is to let everyone know about it. I don’t see a name change as any use at all.

Changing Lumber Liquidators’ brand is very bad idea. Creating brand awareness in a category where customers may buy your product three times in their lifetime is a Herculean task. Lumber Liquidators has accomplished this feat.

They’ve earned a >10% share of the hardwood industry by creating a ubiquitous brand and making the purchase of hardwood floors simple.

Furthermore, the flooring market has changed with the rise of Floor & Décor. As Heraclitus wrote (paraphrased) “You can’t step in the same river twice.”

Braintrust
"I think Lumber Liquidators should keep its name but begin to re-emphasize its roots, which way pre-date any crises."

"Rebranding is not the solution. Every brand has some baggage — I recommend LL focus on implementing and promoting better practices, and connecting with customers."

"Gulp – I just bought my new floors from there! That said, not a single person mentioned problems when I said where we got it."