Will Wrangler make an authentic connection with Millennials and Gen Z? 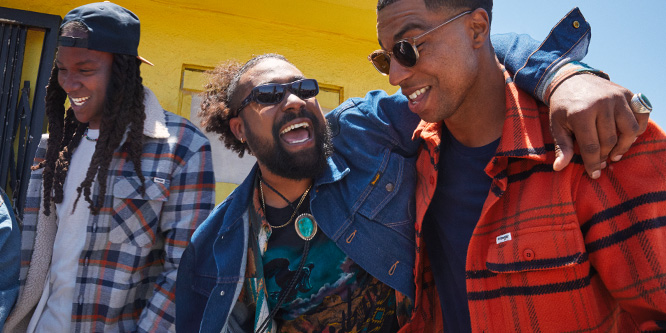 Wrangler faces the same challenge as other iconic American brands: how to stay connected to its heritage while reaching out and connecting to consumers who either don’t know its history or may not be invested in discovering it.

The brand last month launched a new advertising campaign — “For the Ride of Life” — narrated by country music star Orville Peck and featuring a diverse array of people including a cowgirl, an eSports player, an older couple, a rap crew, roller girl gang, skateboarder and young families.

Wrangler, which counts consumers ages 21 to 40+ in its core group, believes that the brand’s message is one that is well received by many people from completely different walks and stages of life.

Holly Wheeler, vice president of global brand marketing at Wrangler, told RetailWire, “The Western heritage and the spirit of the cowboy remains at the core of everything we do, and we always evaluate what is right for the brand through a lens of authenticity.”

“The campaign,” Ms. Wheeler said, “is representative of Wrangler’s continued evolution as a brand, upholding dedication to our western heritage with strategic growth that is true to our brand roots. In the last five years, we have engaged in a demand creation strategy that has expanded our focus to include a broader base of consumers.”

The expansion that Ms. Wheeler talks about has taken Wrangler deeper into complementary growth categories, such as outdoors. That category, in particular, she said, “has natural ties to our history in farming, rodeo and ranching.”

Wrangler is seeking to engage consumers directly with its messaging as well as in cooperation with retailers that sell its merchandise. The “For the Ride of Life” campaign will include television, streaming, display, POS, Wrangler’s site and social media messaging. Ms. Wheeler said that Wrangler makes its “assets available to all of our retail partners to use everywhere our products are sold.”

The company will mark its seventy-fifth anniversary next year and plans are in place for a year-long celebration that will honor Wrangler’s long standing connections to music, fashion and rodeo.

DISCUSSION QUESTIONS: What are the keys to branding that consumers deem authentic? Do you think Wrangler is accomplishing that with its “For the Ride of Life” campaign?

Please practice The RetailWire Golden Rule when submitting your comments.
Braintrust
"Successful authentic branding has to align with the target customer’s values while being aspirational. "

12 Comments on "Will Wrangler make an authentic connection with Millennials and Gen Z?"

This is a tough one. The brand name itself is very restrictive. It’s hard to steer around that obstacle (see also: The Beer Store in Canada). Why not drive hard on core customers? It sure seems like there’s enough there as everyone else chases the elusive Z and M generations, who are more interested in re-sale anyway.

Authentic messaging can be present in any type of content as long as it is consistent with how consumers think of the brand. Successful authentic branding has to align with the target customer’s values while being aspirational. This campaign is a nice balance between the heritage of the brand and the modern twist of what’s relevant to Gen Z, but it’s not disruptive enough to break through all the noise this generation is receiving. This is a hyper-connected cohort – they require show-stopping content.

I think this could be a tall order with younger generations as Wrangler has always been shown as a white guys/rural brand along the lines of cowboys and the Marlboro Man. I’m not sure a few shots of diverse people is enough to erase those decades of images. I’m not even sure what “ride of life” means – at first I thought Harley-Davidson.

I respectfully think Wrangler is missing the mark. This ad feels patronizing and just a tad exploitative. If I were the Wrangler brand manager I’d remember that authenticity is the key to building brand loyalty, So, why not lead with the authentic elements of the brand — the image of the cowboy as a “free” person, independent, one with nature, fully integrated into the environment? Something like, “Bring the spirit of the range to the streets of today,” or whatever. Tie iconic imagery to other people who go their own way, don’t ride with the pack, etc.

I agree Ryan. New imagery alone will not endear Millennials to Wrangler. Back in the day we loved this brand because it represented freedom and the products fit and made us feel great. Those are still relevant values.

Anything is possible once assortment mix and fit challenges are perfected. Marketing seems authentic and scrolling through the website and social platforms, I love the diversity that’s been represented.

I’d like to see Wrangler reinvent itself as a relevant brand and I think there’s a good chance that the brand could be successful.

This is very interesting. While Wrangler has always been a western brand, they have to branch out like all retailers. The line between western wear and casual wear is very blurred and you see a lot of western-centric clothing companies are starting to include more casual wear from apparel to shoes in their collections.

Richard, western wear or western workwear? Wranglers “innovation” was to not have a seam on the inseam like Levi’s did. Why is this important? Spend eight hours on a horse and you will immediately understand. Those inseam stitches rubbing against a western saddle all day can really hurt after a while. Why do I draw a distinction between western wear and western workwear? Because workwear brands like Carhartt, Dickies, and Dr. Martens have all transitioned “workwear” into street fashion.

Authenticity matters more than ever, and the Wrangler team has its work cut out to connect and resonate with both the Millennials and Gen Z groups. The brand has suffered from a lack of awareness and will need to change that narrative creatively and across social media channels.

Wrangler will need to leverage an authentic approach to storytelling, social media engagement around the values that resonate across the Millenial and Gen Z segments. These include sustainability, social responsibility, diversity, inclusivity, and bringing the communities together. This will need to be incorporated into what the reimagined Wrangler brand evolves to, and a welcome departure from their legacy cowboy and Western image.

What is Wrangler’s heritage? Candidly, to most of us I think it’s always been “the jeans you buy if you aren’t buying Levis.” I’m not sure how that would be communicated in an ad, nor am I sure it should be, since you’re allowing your competition to define you (Avis’ success at self-deprecation notwithstanding).

Back to the ad: I wasn’t impressed: bunch of seemingly unrelated images, bunch of words (blah, blah, blah) … found it neither informative nor even entertaining. Should they care? Am I in the target group? (I guess that depends on how large the plus is in “40+”).

Braintrust
"Successful authentic branding has to align with the target customer’s values while being aspirational. "