Will TJX’s Homesense repeat the success of HomeGoods? 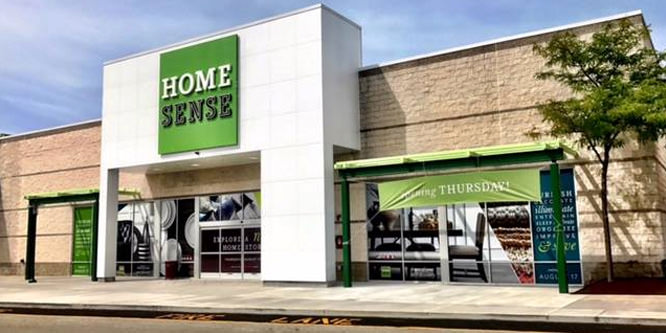 Customers apparently can’t get enough of TJX’s home goods offerings. There was an impressive turnout for the opening of the company’s first Homesense store, a spinoff of TJX’s existing home goods retailer, HomeGoods.

Customers were lined up down the block for the opening of the first Homesense location in Framingham, Massachusetts (the city that is home to TJX’s headquarters) on August 17th, according to People.

There are a few distinctions between Homesense and the otherwise similar HomeGoods chain. Homesense doesn’t feature a children’s or pet department and has an expanded selection of lighting, art and furniture. It also has a “general store” section featuring cleaning products and products to help manage home organization. The store’s offerings are also arranged by color, to help shoppers find items that match.

One might expect that having two home furnishings stores in the same market would result in cannibalization, prompting TJX to choose between opening one store or another in a given market. But in February when the new, then unnamed, chain was first announced, TJX CEO Ernie Herrman stated that the company would be encouraging customers to shop both stores.

While one umbrella company launching a second home furnishings chain may be unorthodox, it’s clear that the first chain is an unqualified success. HomeGoods has experienced an “explosive” growth trajectory, according to The Motley Fool, opening more than 200 locations in the past five years while nearly doubling its revenue. HomeGoods’ total sales were up 17 percent last quarter.

Though TJX already owns a chain of home furnishings stores throughout Canada and Europe also known as Homesense, the new U.S. chain is reported to be distinct. Homesense abroad features at least 44 locations in the U.K. at present, according to Domino.

TJX-owned value retailers like T.J. Maxx have thrived in recent years thanks to their low prices and “treasure hunt” sales strategy, which keeps customers engaged and coming back to find new, exciting items.

DISCUSSION QUESTIONS: Why do you think Homesense is creating excitement among customers, many of whom already seem to shop at HomeGoods? Will Homesense’s success outlast the hype? Can Homesense and HomeGoods exist in the same markets without cannibalizing sales?

Please practice The RetailWire Golden Rule when submitting your comments.
Braintrust
"Shoppers know that there are similar items in T.J. Maxx, HomeGoods and Marshalls. Adding Homesense adds to the fun and excitement of discovery."

"The Treasure Hunt strategy works because it redefines retail as fun. I think this will work EVEN if it cannibalizes from existing HomeGoods Stores."

"If Homesense is able to get into the consumer entertainment-shopping experience space, they will be able to coexist and complement each other."

11 Comments on "Will TJX’s Homesense repeat the success of HomeGoods?"

The Treasure Hunt strategy works because it redefines retail as fun. I think this will work EVEN if it cannibalizes from existing HomeGoods Stores. That’s the brilliance of their strategy. The new stores will simply find a place in the shoppers’ rotation. Greater share of wallet. That’s how I see it.

I agree with Tom. Shoppers know that there are similar items in T.J. Maxx, HomeGoods and Marshalls. Adding Homesense to the “rotation” adds to the fun and excitement of discovery. I’m not sure it will increase the revenue without some new entries into inventory.

No surprise here, especially considering the success of Wayfair and its huge TV budget hyping the same treasure hunt/discovery with deep discounts. The ability to see the home furnishings and match colors, is a key component of this strategy.

HomeGoods and now Homesense are two of my clients. Working for HomeGoods since 2011, I can tell you they are an extremely well-run organization. HomeGoods’ success has been their ability to find just the right items that change often and of course offering them at attractive prices.

The whole point of Homesense was to build a brand that could feature additional products different from HomeGoods. They have done a great job so far opening the first store and they are planning four more by the end of the year. They will keep their eye on their results and plan their growth accordingly. If both HomeGoods and Homesense can continue to entice customers to shop by having them look for what’s new this week, there’s no doubt both companies will be a success.

The excitement around Homesense can be attributed to the brand extension model that has worked so well for many brands. TJX’s HomeGoods is a known entity and, as the article points out, doing very well. Customers who like shopping there are predisposed to like Homesense, which uses the same low-price treasure hunt model. The changes in the category/product mix may provide enough difference so their existing customers base will shop both, but at different times based on their needs.

Consumers love deals and the thrill of the treasure hunt. TJX is a smart retail organization that has figured out what consumers want! While many people questioned the logic of Marshalls and T.J. Maxx in close proximity and “competing” with one another, it appears to be working.

Consumers’ appetite for off-price options and their willingness to shop multiple stores during their treasure hunt has made off-price one of retail’s hottest categories and TJX a very successful company. My last trip to HomeGoods was an event … the store was packed and all registers were ringing, the queuing was very efficient (one line, like the airlines) and there were 40 people in line to check out. I believe if these stores were co-located they would still do well given the treasure hunt mentality of the customer.

The retailer creates excitement because of the “explorative” nature of the shopping experience. The customer might find what they are looking for or what grabbed them as they strolled the aisles, ultimately, they are entertained.

If Homesense is able to get into the consumer entertainment-shopping experience space, they will be able to coexist and complement each other.

I think we may be over-extrapolating a little — a single store, in the company’s HQ city no less, and with little seeming difference between the two siblings I’m not sure exactly what the point is (other than the obvious one that they’re hoping people won’t know they’re related and try both stores).

But who am I to question a formula that seems to work, at least until it doesn’t. And why didn’t (insert Macy’s or JCP or even Sears here) do this?

I wish them well.

Despite the strong growth of HomeGoods, TJX’s US market share of home products remains under-developed. The expansion of Homesense will allow them to capture a larger slice of the market, especially in categories like furniture and large decor where HomeGoods’ offer is less compelling. Given the principles behind Homesense will remain the same as for all TJX’s off-price businesses, it is reasonable to assume that visitation, conversion, and sales will be good.

This segment in retail is doing well overall and there is clearly room for more brands to compete. TJX has the right formula for success in this space with the treasure hunt format and I am sure there will be no issue with having two brands in this segment! I suspect you could locate both of these brands in the same area and they won’t cannibalize any business from each other. It would only be additive providing one more outlet shopper van go to to find just the right item for their home.

I expect TJX customers will patronize Homesense, but time will tell if the new format attracts new shoppers.

Braintrust
"Shoppers know that there are similar items in T.J. Maxx, HomeGoods and Marshalls. Adding Homesense adds to the fun and excitement of discovery."

"The Treasure Hunt strategy works because it redefines retail as fun. I think this will work EVEN if it cannibalizes from existing HomeGoods Stores."

"If Homesense is able to get into the consumer entertainment-shopping experience space, they will be able to coexist and complement each other."