Will Target take NYC by going small and flexible? 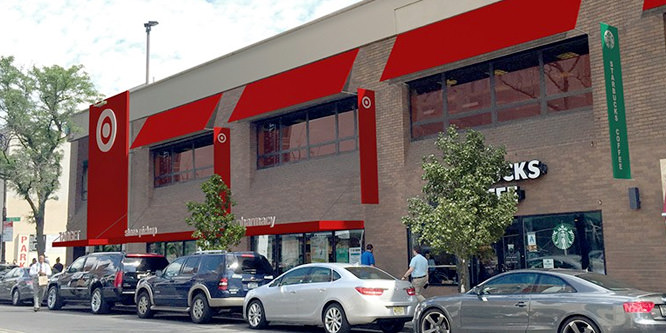 Earlier this year, Target was talking about wanting to connect with a younger, urban audience through their small-format concept. The chain is putting theory into action. Their latest stores are not only going smaller to accommodate urban life, they’re getting flexible with what they’re offering.

Last week a smaller Target store opened in Forest Hills, Queens in a space formerly occupied by a Barnes & Noble. QNS.com reported that it is a “flexible-format” store, meant to have its assortment cater to the localized interests of the customers in the neighborhood. The Forest Hills Target features local sports team apparel and a designer clothing collection called Local Pride. Before the location’s opening, the New York Post reported that the store would have a bigger selection of kosher food to meet the needs of the large Jewish community in the area.

Target is slated to open 13 more small-format stores this year to join the 21 now in operation, according to the Post. The chain has only opened one large-format store in 2016.

The other small-format stores opening in the New York area will also be flexible-format stores, according to QNS, and will open in Tribeca; Downtown Brooklyn; Elmont, New York; Freeport, New York; and Closter, New Jersey.

Target’s urban strategy is but one of the many moves that the retailer has made in recent years to reinvent itself. Some, such as the chain’s focus on health and wellness and sale of connected health devices, seem to compliment an urban customer base. Others, such as testing upscale department store-style layouts, look to be on the opposite side of the brick-and-mortar spectrum.

But Target isn’t the only retailer to roll out smaller formats in urban environments recently, nor to tailor the assortment of urban stores to the unique needs of big city shoppers. At the end of 2015, Lowe’s launched two small-format locations in Manhattan. The stores make use of interactive in-store touchscreen technology and stock items from vendors that cater to urban living which a shopper wouldn’t expect to find in a suburban Lowe’s.

DISCUSSION QUESTIONS: Is Target using its resources wisely by focusing on big cities? Are small, flexible-format stores a good urban expansion strategy for Target and other chains?

Please practice The RetailWire Golden Rule when submitting your comments.
Braintrust
"Well-edited assortments can reach the Millennials who grew up with Target but are moving back to the cities."

"Target is wisely recognizing key distinctions between the markets in which it resides."

11 Comments on "Will Target take NYC by going small and flexible?"

Good move. Target’s key customer base is also taking up residence in the city. And if nothing else, to use these smaller formats for online pickup alone would be a win. I’m sure they already know quite a bit from their “City” stores, but an excellent idea in my opinion.

Smaller formats for mass merchants run into trouble when they cannot fulfill the expectation of customers used to shopping in their larger formats. By customizing its mix to focus more on the needs of the local customer Target increases the chance of its smaller-format locations’ success.

The supply chain issues for smaller formats for mass merchants and other large format retailers has been discussed before. It is difficult to adapt a supply chain built on truckload drops to service stores that require the same delivery frequency to remain in-stock, have fresh products, etc., but with smaller drops.

Cities are ripe territory for Target stores, despite the higher occupancy and operating costs. There isn’t that much open territory left in suburban America for Target or other big box stores that are close to their saturation points. Meanwhile, well-edited assortments can reach the Millennials who grew up with Target but are moving back to the cities.

Target is participating in the recent retail trend of “small is beautiful,” recognizing that retailers can grow bigger by acting smaller. Urban retailing is coming of age and Target, through its customization of this new format, emphasizes the concept of reconfiguration of stores in less space.

Consumers will look to urban retailers like Target to offer a curated assortment appropriate to their specific needs — whether urban residents, commuters or tourists.
.

I’m reminded of the adage “Think globally, act locally.” Target is wisely recognizing key distinctions between the markets in which it resides.

Using the learning from the results of urban Targets makes more sense than hunkering down with a strategy that doesn’t optimize growth. The costs associated with being in a big city can be far greater than those of the suburbs. Smaller stores contain some of the real estate costs. Choosing inventory wisely to satisfy the needs of the urban dweller, with customization by location, has the possibility of creating a healthy revenue/profit stream.

But the effort takes scrutiny and flexibility that requires perfect timing. It will be interesting to see if Target relies on central management or their local staff at the new stores.

On paper it makes sense. However the proof is in the physical environment, you know “the box.”

High cost of inventory per store, higher cost of employees and high costs of rent will necessitate the change. The last ten years have seen retailers succumbing to shoppers buying online. In the next decade we’ll see retailers increasingly leveraging the internet in their stores to drive sales. Retailing will turn into facili-tailing; seamlessly helping customers part with their money in stores, online or wherever they may be.

The real estate saying “location, location, location” holds true with Target’s move to city locations. It can open a new customer base for them, especially if there is a college close by. It sounds like it will be modeled to get in, get what you need and get back to what you were doing. I see this being successful if managed to satisfy the needs of the neighborhood it services.

We all know what Target’s problems are (inventory control, a lackluster food component, negative publicity from security breaches and the failed Canadian expansion), so the real question whether or not they should commit resources to “fixing” these issues or continuing to expand. Unfortunately they really need to do both, so I can’t fault them for explicitly doing the latter, and we can only hope they’re working on the former behind the scenes.

As for the big city approach, I’m not overly excited — nor am I excited when Walmart tries it — since it comes about from market saturation in their traditional format rather than some kind of great game plan. (That they won’t be emphasizing bacon to orthodox-heavy communities seems so basic, I don’t think you should get props for it.) A stripped-down Target might end up being little more than a big Walgreens … is the world waiting for that?

Target is using its resources wisely by going smaller format, but more importantly, catering to the localized interests of the customers in the area. That’s the way to be relevant and responsive to your specific audience, and not try to be all things to all people. I think it’s the wave of the future … oops … rather a sign of the present trends, to go smaller and be more relevant.

The trend is that suburban populations are moving back into urban areas. It benefits the consumer’s brands to migrate with them.

Think global, act local. It’s a good business philosophy, and I believe it will hold true in this case.

Braintrust
"Well-edited assortments can reach the Millennials who grew up with Target but are moving back to the cities."

"Target is wisely recognizing key distinctions between the markets in which it resides."