Will Starbucks be the same without Howard Schultz as CEO? 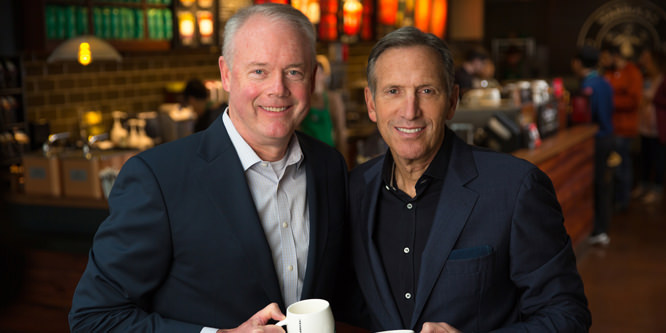 Yesterday’s news that Howard Schultz will step down next year as the chief executive officer of Starbucks shouldn’t come as any surprise. After all, Mr. Schultz said he was taking a step back from the day-to-day running of the company to focus on the development of its Reserve and Roastery concepts back in July. The question is whether this will be a permanent move or if Mr. Schultz will feel compelled in the future to ride back in and rescue the company as he did once before.

Kevin Johnson, president and chief operating officer of Starbucks and a member of its board for seven years, will assume CEO duties in April of next year. Before joining the executive management team at Starbucks, Mr. Johnson spent 33 years working at tech companies, including 16 years at Microsoft and five as CEO of Juniper Networks.

“Over the past two decades, I have grown to know Starbucks first as a customer, then as a director on the board, and for the past two years as a member of the management team,” said Mr. Johnson in a statement. “Through that journey, I fell in love with Starbucks and I share Howard’s commitment to our mission and values and his optimism for the future.”

Mr. Schultz, who will become executive chairman of the board following the switch, called Mr. Johnson “my partner in running every facet of Starbucks’ business over the last two years.”

While the ascension of Mr. Johnson into the CEO role seems well conceived, there is concern about anyone filling the shoes of Mr. Schultz based on the company’s previous experience. Back in 2005, Mr. Schultz turned the job over to Jim Donald, a former grocery executive, only to come back three years later as the company struggled. While acknowledging at the time that some of the issues were the result of a faltering economy, Mr. Schultz also said many were of Starbucks’ “own making.”

DISCUSSION QUESTIONS: Do you see Kevin Johnson bringing fresh perspective to the role of Starbucks CEO that might change the direction of the company? Do you think Starbucks will ultimately be more or less successful as a result of its new management structure?

Please practice The RetailWire Golden Rule when submitting your comments.
Braintrust
"There comes a time in any business when the reins should be handed over."

"As an occasional customer, this doesn’t worry me at all. As a long-time shareholder, this scares the heck out of me..."

"I am confident that Johnson can carry the ball. Maybe he will be less political than Schultz. He might want to get some tattoos..."

12 Comments on "Will Starbucks be the same without Howard Schultz as CEO?"

No CEO can go on forever. If someone is that indispensable the company has deeper problems. Schultz is a visionary who has set Starbucks on a road to continued success. We now wait to see if Johnson can capitalize on the company’s previous success. He’s had two years of training to get prepared.

While the magnitude of this transition might make a tempting parallel to Apple’s Steve Jobs/Tim Cook transition, it’s not even close to the same. Starbucks will go on, perhaps even better than before. Obviously Mr. Schultz is still alive and very much part of the business, so this should provide all Starbucks loyalists with peace of mind. More importantly, I believe Starbucks will be even more successful because Mr. Schultz is passing the baton to a leader he’s worked with, trusts and who has the vision, skills and expertise to take the company to places that, by his own admission, he can’t himself.

Just like most things Mr. Schultz has done, thoughtfully managing his own succession is just one more example of why he is one of the most revered executives and Starbucks is a beloved brand.

I agree with Max: No company, especially a big public one like Starbucks, can last forever on the basis of one key CEO. (Although there are many examples, such as Whole Foods, where the CEO can’t seem to step down from the big job.) We’ll see whether Mr. Schultz — so central to the Starbucks success story — can allow his handpicked successor to do his job, including making some mistakes along the way. And we’ll see whether Mr. Johnson can balance the “fresh set of eyes” with the Starbucks culture that has been so successful through the years.

Howard Schultz has done an outstanding job leading Starbucks. This will continue under Kevin Johnson’s leadership. One reason is Mr. Schultz is not going anywhere. He will leave Mr. Johnson alone to put his stamp on the business. But he is always there when needed. The captain is not going to steer the ship, but is there to steer the next captain. There comes a time in any business when the reins should be handed over.

They’ll be just fine (he said, slurping at a giant cup of addictive black juice).

I am confident that Johnson can carry the ball. Maybe he will be less political than Schultz. He might want to get some tattoos and such to match most of the store employees. Be more hip — kill the t-shirt and step up the shirt colors.

As an occasional customer, this doesn’t worry me at all.

As a commentator, I think Kevin Johnson is as well prepared as anyone can be to assume an iconic CEO role.

As a long-time shareholder, this scares the heck out of me.

Starbucks has learned from the adversity of the mid-2000s and won’t repeat the mistakes that took it off track for a while. Kevin Johnson is also a much different type of successor than Jim Donald was. With a revitalized store fleet, the most successful mobile app in the history of retail and its legendary culture intact, Starbucks is well positioned for the future.

It will be interesting to see if they’ve replaced the CEO with a COO and simply changed the CEO’s title to Executive Chairman. It’s hard to separate Schultz from the brand, similar to the transition from Gates to Ballmer at Microsoft. It’s also hard to imagine that he won’t still be the driver behind culture and innovation at Starbucks. I think that for Johnson to be viewed as credible he will have to come out quickly with innovation or performance that wows customers and Wall Street. Schultz will have to allow his new CEO to be the face of Starbucks sooner rather then later.

I think Starbucks is going to be just fine with Kevin Johnson. He’s handpicked by Howard, and could be an even better operator than Howard. He also understands how critical the culture is to Starbucks, but I don’t think he’ll shy away from trying new things.

I don’t think it will be any less or more with Mr. Johnson. That’s an example of how well it will work. They won’t miss a beat.

Of the many qualifications it would take to be Starbucks CEO, Kevin Johnson has four of them in spades: global CEO experience, charismatic leadership, trust from Howard Shultz, and technology chops.

The first three are givens. The latter point says as much about Starbucks as it does the new CEO.

Mobile payments now comprise nearly 25% of Starbucks orders, while mobile order & pay accounts for 6% of transactions. Both are growing. Starbucks had over 1,000 tech workers earlier this year and has been adding to the ranks.

The company no doubt will have struggles ahead, but having the right leaders (plural) in place won’t be one of them.

A rose is a rose by any other name. This is very true for companies as well. Take a look through the way back machine and we see this clearly demonstrated by the likes of Datsun and Rambler. Simply more of the same as in product, marketing and results. Five dollar danish and donuts might have made the improvements they are seeking. They at the very least would have made money instead of costing more money.

Braintrust
"There comes a time in any business when the reins should be handed over."

"As an occasional customer, this doesn’t worry me at all. As a long-time shareholder, this scares the heck out of me..."

"I am confident that Johnson can carry the ball. Maybe he will be less political than Schultz. He might want to get some tattoos..."