Will shelf scanning robots put an end to out-of-stocks? 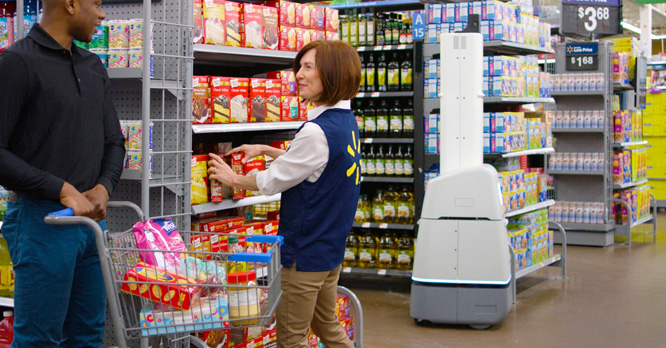 Of the numerous types of robots that are catching on for use in the front of the store, robotic shelf scanners are the ones that retailers see being most effective, according to a new RetailWire Research study.

The study, conducted in conjunction with Brain Corp, found 59 percent of retailers said shelf scanning is the function or application that can be most effectively filled by robots. Order picking came in second at 47 percent, followed by moving product loads (35 percent), pricing accuracy checks (35 percent), floor cleaning (21 percent) and planogram compliance (21 percent).

Retailers’ emphasis on using robots for shelf scanning likely comes from the perception that the technology is a consistently reliable means of maintaining in-stock positions and the successful implementation of omnichannel tactics, including store pickup and delivery.

At least one test of shelf-scanning inventory robots did not go according to plan. Walmart announced late last year that it was scrapping its pilot of shelf-scanning robots. The chain found that in-stock positions could be more cost-effectively managed by human associates. Walmart did, however, continue to use the floor scrubber robots that it had been piloting to handle front-of-store janitorial tasks.

In addition to shelf scanners, other robots that roam store floors and undertake shelf-related duties have been coming to market recently.

The sales floor is not the only area of retail where robots are being seen with a greater frequency.

Nearly three-quarters of retailers in the RetailWire study say that their use of robots in warehouses or distribution centers has increased due to the novel coronavirus pandemic.

This trend can be observed in practice with Kroger, which has built large robot hive warehouses in the U.S. in partnership with Ocado, after that provider had success in Europe and Canada.

DISCUSSION QUESTIONS: Where do you see retailers most likely to put robots to work in stores and other facilities? Do you think the cost-effectiveness question will be answered by robotics companies sooner rather than later?

Please practice The RetailWire Golden Rule when submitting your comments.
Braintrust
"The capabilities of robots are increasing and the cost is decreasing. If for a specific task the ROI of robot implementation does not pay today, it will pay tomorrow"

"...retailers are having to more aggressively figure out how to get a tube of lip balm to a front door, instead of a pallet to a store. This is a deep structural change."

"We’ll see more robots behind the scenes in warehouses and DCs before we see them in the store."

40 Comments on "Will shelf scanning robots put an end to out-of-stocks?"

Robots may help with keeping items in stock, however that presupposes that all aspects of the retailer’s distribution and fulfillment operation are properly optimized. Target is a devil for out-of-stocks (it’s not the only one), and it’s not because no one notices that items are not on the shelf: it’s because they have issues which stretch further back into the supply chain. Robots won’t necessarily solve all of those issues.

The shelves in my local Target are ALWAYS empty!

Target’s in stock conditions are also quite terrible at most of its locations where I am in NV. One low volume location with only a few of everything on the shelf has the fewest out-of-stocks. They have improved in the past month from how they were, though.

Target is supposed to have an employee walking around who scans the out of stocks and it sends a message to the backroom employees to find the item and fill the shelf. Not sure if my local store in Reno, NV which is really poorly run is bothering to do this, but let’s assume they are doing it because Target tracks metrics like that pretty heavily and I’d be surprised if they were skipping it.

The use of robots in warehouses and backrooms of stores is the most logical location as you don’t have to worry about competing for space with customers. However, with better sensors and scheduling robots during non-busy times, having robots on sales floors has become practical. As labor costs continue to rise and the cost of robot technology becomes more economical due to economies of scale the ROI is becoming positive. Robotics, especially in micro-fulfillment centers and dark stores is a hot trend that is expected to continue.

Empty shelves can be restocked by either human or robot only if the product is actually in the store. Often, the product is not in the store because of ineffective inventory forecasts. This is a function of poor forecasting. Use of AI in forecasting is critical and is being adapted and adopted at spotty rates.

To date, robots in retail seem to have been a solution trying to find a problem. Finally robotics have found a purpose in shelf scanning. It was nice to have a robot tell the manager to get someone to clean up an aisle that had a spill, or that greeted a customer, but we all knew that those applications were not viable long term. If retailers can do a cost/benefit analysis of the revenue they lose with out-of-stocks, then they may see that the shelf scanning application, long term, makes sense.

How about actually putting the goods on the shelves, not just advising that there is an out-of-stock. Have you ever noticed in an apparel store the sales person refolding the merchandise after it was handled by shoppers? Can’t a robot do that?

We’ve been talking about shelf-scanning robots for a decade now. Out-of-stocks and perceived out-of-stocks are a huge problem for retail, so there should be adequate incentive to make robots work. One of these days we’ll get it right, assuming that we can fix the longer-term supply chain issues.

Shelf scanning and driving a more optimized replenishment process is ideal for grocery operations to leverage robotics. In what was once a very human and manual process, led by intuition and experience, robotics, combined with data, analytics, and AI, would absolutely help to mitigate the out-of-stock situation at the grocery and retail pharmacy operations.

There are several leading solution providers, including Zebra Technologies, that are driving this change. The SmartSight robot is a hardware, software, and services solution that roams the store’s aisles, checking the shelves, using a combination of computer vision, machine learning, workflow automation, and robotic capabilities. Zebra claims it increases available inventory by 95 percent while reducing human time spent wandering the aisles to do inventory manually by an average of 65 hours per week.

There are clear labor savings in leveraging robots but, more importantly, the grocery stores will be able to be more predictive to keep up with the changing consumer demands.

There are many potential uses for robots in retail (that has a ring to it). Checking shelf inventory levels requires RFID tagging or the ability for the robot to recognize holes in the shelf visually. The former is not universal and the latter is not cheap. On the other hand, picking and floor cleaning and shelf disinfecting are easier to implement and probably less expensive.

I don’t think robots are a great solution for in-store. Distribution or fulfillment centers maybe, but you certainly wouldn’t want them in the store during open hours, when they would become toys for kids passing by or an object for theft.

I would expect the growing use of robots in DCs and warehouses where workflow can be steady and predictable. I also expect to see robots in stores, but the sales floor is starting to get very crowded with the growth of fulfillment teams and carts picking orders. If it gets too congested with added robots it will have a negative impact on traffic and sales and therefore cost-effectiveness.

“Great, they’re out of Cheerios again, the aisle ahead is blocked like the Suez Canal by a shopper who brought 3 kids, the Instacart shopper snatched the last pack of hash browns right as I got there, and now a Dalek is screaming at me.” OUT OF STOCKS WILL BE EXTERMINATED, indeed.

As Neil says, only if the entire distribution system is aligned and, gee, nobody’s is. Also, don’t discount the creepiness factor of robots in the aisle while you’re trying to shop. Backroom and warehouse/DC makes more sense to me.

Having the robots collect inventory in the store is only the tip of the iceberg. There are many supply chain processes that need to support moving goods to the shelf that must be connected and probably modernized to make the collected shelf data effective. And as Walmart discovered, their customers are not comfortable. It is more likely that robots will work in the backrooms or warehouses where they can be quite effective at moving products where they need to go next without getting in the way of the shopper.

Where? In the warehouse/distribution center, in the back room, in the store. In fact, anyplace where there is a mundane and repetitive job. The capabilities of robots are increasing and the cost is decreasing. If for a specific task, the ROI of robot implementation does not pay out today, be assured it will pay put tomorrow.

But, please, like the fulfillment shoppers that clog the aisles in the supermarket, keep the robots out of the aisles during shopping hours.

I suspect in the near-term they are effective for counting or managing inventory but with computer vision and other innovations, cameras will be able to monitor inventory levels from a ceiling or elsewhere; no need for roaming robots.

Cost effectiveness comes at sufficient scale and when tasks can be done more efficiently than humans.

Robots in-store solely for the purpose of inventory detection may not provide the best ROI. Also, they’d never be able to manage inventory in real-time. If the bot is scanning aisle 2, it’s not checking aisle 10, so that’s hardly an advancement. And they can be intrusive to shoppers.

Alternatives are cheaper, multipurpose, and offer lower maintenance. Consider that most retailers have loss prevention cameras already in the ceiling. Those could be used to detect shelf voids too (with the right resolution and cognition). And advances in battery powered electronic shelf labels can also double as stock detectors and planogram compliance.

Robots do have a place in retail, however. They can be used for repetitive tasks like order packing and fulfillment in the back room. And why not use small autonomous bots to deliver groceries for pickup in the parking lot?