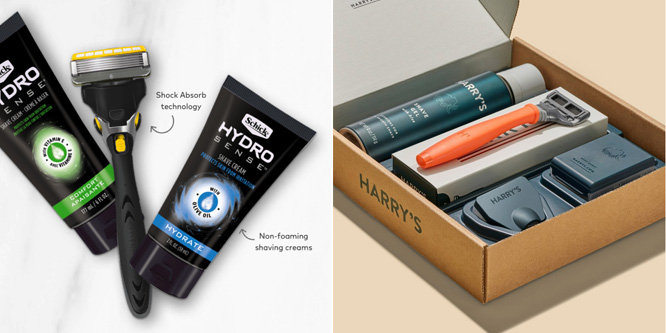 Edgewell, the parent company of Schick and Wilkinson razors, Edge shaving gel, Playtex and other personal care brands, announced today that it has entered into a definitive agreement to merge with Harry’s in a cash and stock deal that values Harry’s at $1.37 billion.

The combination of the two companies, according to a press release announcing the deal, will “create a next-generation consumer products platform with an expansive runway for accelerated topline growth and enhanced value creation.” Translation: The two companies will work together to come up with new products that create mass appeal and drive the price of Edgewell’s shares up well beyond yesterday’s close of $39.82.

Harry’s — along with Dollar Shave Club, acquired by Unilever for $1 billion in 2016 — has been among a number of consumer-direct brands shaking up the men’s grooming and shaving categories in recent years.

Edgewell’s shaving brands combined with Harry’s represent just over 16 percent of sales in the U.S. shaving market, according to Euromonitor data cited in a New York Times report. Procter & Gamble, with its Gillette brand, represents 47.3 percent of category sales.

While known primarily as a consumer-direct brand, Harry’s is not a stranger to retail. The company began selling its products in Target’s store and on its website in 2016. The brand got picked up by Walmart last year.

Andy Katz-Mayfield and Jeff Raider, Harry’s co-founders, will become co-presidents of U.S. operations for Edgewell after the deal’s close.

“When we launched Harry’s six years ago our vision was to create a grooming brand that better met our needs as consumers, and over time, a CPG platform that creates brands people love across more categories,” said Messrs. Katz-Mayfield and Raider in a joint statement. “Together with Edgewell, we see a significant opportunity to continue delivering on that vision, leveraging Edgewell’s advanced technology and global footprint alongside our customer-first approach, brand building expertise and omni-channel capabilities.”

Harry’s owners will control 11 percent of Edgewell’s shares after the deal is completed.

DISCUSSION QUESTIONS: Will the Edgewell/Harry’s deal create a stronger single company from the two? What will the combination of Edgewell and Harry’s mean for brand rivals and retailers that carry the two companies’ products?

Please practice The RetailWire Golden Rule when submitting your comments.
Braintrust
"The biggest asset that Edgewell is acquiring is the way that the Harry’s founders think."

"The way I see it, this is a wonderful chance to form a larger company which will have a global reach."

"we can never forget that the Harry’s and Dollar Shave Clubs of the world made their fortunes thinking much differently than the companies that bought them."

The biggest asset that Edgewell is acquiring is the way that the Harry’s founders think. If they can stay grounded in their disruptive/start-up/entrepreneurial mind set, then Edgewell has acquired market-busting potential. This is a great evolutionary move for all concerned. I think the joint statement that talks about the opportunity to have a CPG platform that delivers on their vision nails it.

The combination makes the company stronger, especially because Schick and Wilkinson are secondary brands behind Gillette, which has had its own issues with the “disruption” model of Harry’s. The challenge is to maintain Harry’s edge (so to speak) as a different business model despite its mass distribution already well underway.

Any move that expands omnichannel capabilities is generally a good one these days. And staying in your own consumer need lane (shaving/grooming) typically enhances any merger’s chances of success. But for some reason this one just doesn’t feel right. I’m having trouble seeing an overlap of Harry’s and Schick/Edge consumers. Perhaps the leverage is in extending Harry’s growing position in brick-and-mortar — but I don’t see taking the Edgewell brands into the online space via Harry’s universe as much of an opportunity. Maybe I’ve just been wearing the beard too long to get it.

It is a great move for EPC. Clearly, their acquisition strategy over the last few years with Bull Dog, Jack Black and now Harry’s, is to better position the company for future consumers. This is a game changer and will remove Gillette’s dominance over time.

The new model for retail acquisitions is “distinction differentiates,” that is, letting the acquired companies continue to do what they do best (and what made them attractive in the first place). It sounds like Edgewell is taking this approach and looking at Harry’s as an innovation arm. As retailers latch onto digitally-native brands, companies like Edgewell have little choice other than to join the party – if you can’t beat them, buy them!

The way I see it, this is a wonderful chance to form a larger company which will have a global reach. And as a result, new marketing techniques will be absorbed by both. Brilliant move.

This is a great deal for Edgewell. Harry’s is a disruptive brand that has gained a lot of ground in the shaving category. There is significant potential for Harry’s to expand into new personal care areas, just as it already has done in shower gel and skincare products. So long as the ethos of the brand is maintained, Edgewell should be able to drive significant growth from its new addition.

Harry’s along with the Dollar Shave Club has disrupted the men’s shaving shopping segment with their customer obsessed strategies. The Harry’s brand has perfected the DTC model, and the Schick company will only benefit by bringing all of the talent, expertise and innovation in house.

Schick is taking a page from Walmart’s recent acquisition strategies (jet.com, Bonobos, etc). Walmart has built an impressive portfolio of digital native brands. This has helped the iconic brand remain relevant, dominant and enable them to attract and retail new customers.

Diversification is key for brands, especially as this approach will expand the Schick team’s ability to provide more products and services to a broader range of consumers.

Innovation is very difficult at these big CPG firms. Acquiring a DNVB like Harry’s provides a company like Edgewell a new perspective and a new way of thinking from people that had to think differently to succeed in a market dominated by behemoths. This will not be the last of such moves by any stretch.

Harry’s broke away from the traditional retail-CPG model by rejecting accepted and unstated assumptions on customer engagement. This acquisition brings the best in traditional and disruptive retail models for the ultimate benefit of the consumer while delivering a more personalized experience across all touch points.

This could offer the opportunity of creating a direct-to-consumer model with scale for the combined Edgeway products – many of which are regular consumption products that are often a hassle to buy in-store. Add to this the high security costs of razors in-store and there is potential that this could provide good margin for Edgeway, reduce costs and hassle for the consumer – but at the same time eliminate traffic-driving products for pharmacy chains, reducing their wallet share.

The issue here isn’t one of platforms, but rather culture and vision. The fastest path to bring innovation to a legacy brand is through acquisition, but that generally fails to address a whole series of what philosophers like to call prior questions. Among these questions are issues such as; how long will the innovators stick around once the deal terms run their course? How open will the legacy brand be to insights from a competitor they’ve been at war with for years? And which faction wins the cultural wars — the champions of out-of-the-box thinking or the owners of the box factory? Hopefully in Edgewell’s case, the acquisition will work out well. If it does, the new, multi-platform offerings might give competitors fits and starts. But we can never forget that the Harry’s and Dollar Shave Clubs of the world made their fortunes thinking much differently than the companies that bought them.

Spot on Ryan. I’m going to attribute this to Jack Welch (and I think I’m right). When asked about GE’s acquisition success he said (paraphrase) “successful acquisitions are 10% strategy and 90% culture” or words to that affect. Seems right to me.

In addition, the marketing genius of Harry’s will propel new product categories or brands that could significantly enhance Edgewell’s total revenues. This was a smart acquisition.

I view this deal as more additive than synergistic. By that I mean Harry’s younger, hipper shoppers will overlap very little with Schick’s and Wilkinson’s older guard. On the other hand, the combination could lead to critical-mass distribution power for Edgewell, as Wilkinson is sold in Walmart and Walgreen, while Harry’s has famously found a prominent position in Target.

The shave club concept has clearly altered the landscape in men’s grooming. Even Gillette has been forced to create a competitive offering.

Subscriptions have emerged as a tried-and-true entry strategy for disruptor brands that lack the clout to get shelf space in major chains. Once a following is developed, the power balance shifts. Harry’s has been a great example of how this can work.

Braintrust
"The biggest asset that Edgewell is acquiring is the way that the Harry’s founders think."

"The way I see it, this is a wonderful chance to form a larger company which will have a global reach."

"we can never forget that the Harry’s and Dollar Shave Clubs of the world made their fortunes thinking much differently than the companies that bought them."