Will ‘Project Gigaton’ give Walmart a sustainable competitive edge? 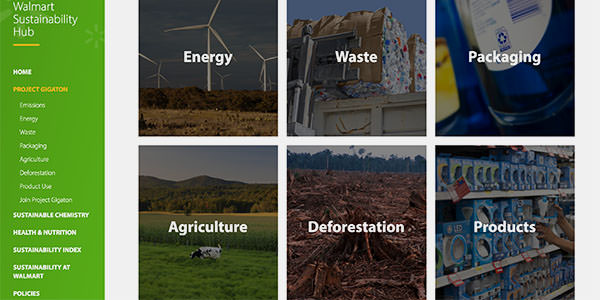 Walmart is partnering with the Environmental Defense Fund on a green initiative called Project Gigaton, which will reduce a gigaton of greenhouse gas emissions from Walmart’s supply chain by 2030. While the program was announced in April, a joint commentary was published on CNBC this week (presumably in response to the U.S. government starting withdrawal from the Paris climate agreement), and explained the thinking behind this initiative and other environmental efforts.

Walmart believes it needs to be nimble, but also needs to stay the course on some long-term commitments, in spite of “shifting winds.” The program will result in an emissions reduction equivalent to taking 211 million cars off the road for a year.

Walmart began to embrace environmental issues more fully in 2005, when it found itself an early responder, providing supplies and donated goods, and coordinating relief efforts, immediately after Hurricane Katrina. The company decided to consider long-term implications of the storm, and become a “positive, difference-making company every day.” Programs were started to cut emissions and waste, and sell more sustainable merchandise.

Now, Project Gigaton is a piece of Walmart’s sustainability initiatives, designed to help address long term-global challenges and improve people’s lives. Walmart believes that organizations of all sizes can make an impact on the environment, while improving business performance.

Walmart says some companies may think they are too small to make a difference, but that all can contribute. They have created an emissions reduction toolkit highlighting the business case for their effort, which can be adapted to like-minded organizations.

Walmart has many other sustainability initiatives underway, such as using solar and other renewable energy, making its fleet more efficient, packaging improvements, reducing deforestation, and improving product use and design.

Meanwhile, U.S. and multinational retailers and brands such as Apple, General Electric, PepsiCo, Walt Disney, ExxonMobil, Chevron, Facebook, Google, and others have condemned the U.S. withdrawal from the Paris climate accord and vowed to make their own efforts to keep the pledge.

DISCUSSION QUESTIONS: Should business think strictly of short-term revenue and profit goals or do they have an obligation to factor larger, longer-term environmental impacts into their business plans? Do you think retailers and brands that have pledged to continue working to cut emissions and improve their overall sustainability programs in contrast to the U.S. government’s position will be rewarded for their efforts?

Please practice The RetailWire Golden Rule when submitting your comments.
Braintrust
"Looks like Walmart will start tipping this iceberg toward the environment!"

10 Comments on "Will ‘Project Gigaton’ give Walmart a sustainable competitive edge?"

Businesses don’t have an obligation, but it makes sense on many levels. It’s what consumers want and expect from companies. It’s good to be a steward of the planet. It’s great PR. And if it can be accomplished without hurting the bottom line, so much the better.

Companies are here to make money. Retailers are no different. There is no “should” other than the profit motive for firms.
However, if this is what customers want, and it meets the expectations and desires of shoppers — then that affects profits. That’s the way to get companies to pay attention to environmental issues.

Kudos again to Walmart, for taking the leadership position. Despite the U.S. government’s decisions on the environment, shoppers will determine how much support they will put into environmental factors. It is a growing concern, and other retailers who have done a good job include H&M and The North Face (recycling old clothing for a discount). Efficient systems inside retail will make a difference, like route optimizing order management technology.

Looks like Walmart will start tipping this iceberg toward the environment!

Environmental impact programs must seen through the lens of total economic impact which includes brand positioning, economies of operation and future cost/benefits to the enterprise. Similar to the criteria that appears to have been applied in U.S. government policy. The goal of cutting emissions by business can be met in so many ways that perhaps it is these ways that merit assessment. Reducing waste being near the top of the list.

In order to bond emotionally with Millennials, Generation Z and beyond, retailers and brands need to embrace social and environmental responsibility in a real and tangible way — not just shallow PR stunts. Large corporations can step into the void left by our current administration’s lack of global leadership and take a stand that goes beyond this quarter’s analyst’s call and immediate profit. We live in a period where “doing the right thing” seems lost yet our youth are paying attention and they expect and demand change and responsibility. They pay attention and will vote with their e-wallets.

Businesses absolutely have an obligation to think about the global impact of their practices. Businesses function on the planet on which we all live, using the same resources en masse. This idea that businesses function outside of the global ecosystem and are immune to regulations put in place for our survival as a species is as toxic as it is nonsensical.

Even those who value profit over sustainability have conceded that global-thinking business practices cater to consumer demand. Younger generations aren’t blind to the impact of their purchases and don’t want their planet to be destroyed by a profit motive.

This is why we take notice of brands such as Walmart with their ethical, sustainable initiatives towards respecting the planet on which we live. It’s life insurance for us to buy from sustainable companies.

Cue the applause. It’s a great effort by Walmart and Environmental Defense Fund is a perfect partner.

My belief is that people AND companies need to do the right things for the right reasons, however, in the strictest sense, companies are only obliged to focus on profits. Rather than let my skepticism about their motivations get the better of me in trying to determine how altruistic Walmart is on this issue, I’m glad that they will be making a positive impact on the environment. Plus, it ups the stakes for others to follow suit.

Having said that, Walmart doesn’t cater to “urban hipsters” or “treehuggers” per se, each a demographic typically interested in theses issues, so one would expect Amazon (who does attract them) to be the company at the helm here. I think some of Amazon’s customers will take notice.

I applaud Walmart on their environmental efforts, but they have also made it very clear that they intend to save money through their “better packaging” and “green building” efforts, not just save the planet.

Businesses, by definition, are about consuming something (resources, time, etc.) so it’s always problematic how much “conservation” they should endorse: would the world be better off without cars? Perhaps, but car companies wouldn’t.

Suffice it to say if a given result can be accomplished using fewer resources, then that’s good; but the problem is making sure it’s the same result — cut the lighting in your store or parking lot? OK, but not if the diminished light level makes labels hard to read or increases tripping hazards.

Will businesses be rewarded for their efforts? Probably not, and at any rate if they are “rewarded” it will be for what people perceive they are doing more than what they actually are.

Kudos to Walmart for leading the way on environmental commitment as well as so many other ways (especially in view of the rapidly-changing, bucking-bronco, wild steer riding retail rodeo). Such actions shouldn’t be compulsory for retailers, but oh so wise and prescient of Walmart.

Today retailers are providing product and services to over 7 billion people world wide. The population is in need of more than the basics which include food, water, sanitation, clothing fuel and shelter. Much of what is provided to keep people alive is furnished at an ecological cost that now includes the continuous erosion of resupply capabilities. “What do you want me/us to do about this?” is not an answer for skyrocketing LOHM G&A cost increases. Consumers are buying price and placing value continuously further away to match budget allowances. The design and use of low cost renewable product is mandatory for companies to keep in step with the consumers stagnant money supply.

Braintrust
"Looks like Walmart will start tipping this iceberg toward the environment!"