Will marketplace sellers carry the Prime Day for Amazon? 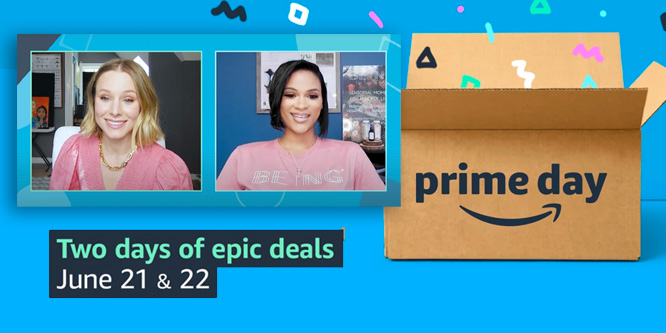 Amazon.com is all about its customers, particularly its Prime members, but the retail and technology giant wants everyone to know (Congress and federal agencies) that its love for the small guy extends to its marketplace sellers.

The company held a press conference yesterday to announce that this year’s Prime Day will take place on June 21 and 22. Amazon isn’t going to wait until those two days, however, to get started. It will be offering special deals to Prime members on products from third-party sellers with the added bonus that purchases made between June 7 and 20 will earn Prime members a $10 credit that can be used on Prime Day.

Amazon ran a promotion two weeks ahead of Prime Day in 2020 that generated over $900 million in sales for third-party sellers on the platform. Marketplace merchants racked up more than $3.5 billion in global sales, a nearly 60 percent year-over-year increase, for the two days that made up the Prime Day promotion.

Star power has been part of Amazon’s past events and this year the company is working with celebrities Kristen Bell, Mindy Kailing and Karama Brown to generate social media buzz around Prime Day.

Ms. Bell spoke with the founders of two small consumer-direct brands — PawStruck, a natural dog treat company, and Live By Being, an artisan crafter of self-care products — that sell on Amazon and use Fulfillment By Amazon to handle their logistical needs.

Kyle Goguen, founder and president of PawStruck, and Kennedy Lowery, founder of Live By Being, spoke of their experiences over the past year with the pandemic and its effect on their businesses.

Ms. Lowery’s company, in particular, faced some challenges with supply chain interruptions. Both executives said that Amazon’s fulfillment system helped them better manage the demands they faced and ultimately turn in big years. Both company’s product categories were in high demand as consumers bought pets and sought out healthy ways to pamper themselves.

Both Mr. Goguen and Ms. Lowery are looking to set records with this year’s Prime Day as both saw big sales spikes ahead of the 2020 event and even bigger jumps during it.

“Every time someone purchases from a small business, someone does a happy dance,” Ms. Lowery said. “I’d like to say that me and my team are those people doing a happy dance every time we get a sale.”

DISCUSSION QUESTIONS: Have Amazon’s marketplace sellers become the biggest key to its sales success on Prime Day as well as the rest of the year? Do you foresee Amazon pulling back on its own retail sales as third-parties grab a greater share of the platform’s sales?

Please practice The RetailWire Golden Rule when submitting your comments.
Braintrust
"Yes. Marketplace sellers were the stars of Prime Day 2020 and they’re gaining influence all year round. "

17 Comments on "Will marketplace sellers carry the Prime Day for Amazon?"

It’s probably crazy to bet against Amazon, but I think this year people will head for the stores — we all just got out of jail.

Paula, I honestly expect to see both happen!

Marketplace sellers have always been important to Amazon’s ecosystem and they are becoming even more so. Despite what is so often said about Amazon, it has been a facilitator for smaller businesses to sell their wares more widely and to tap into a huge pool of global consumers. Of course, Amazon makes money from third parties as it sells various services and charges various fees. However that’s perfectly legitimate and there is no difference from the various charges levied by traditional retailers for slotting, etc.

The marketplace sellers are really what make Amazon, Amazon. There are so many great products and brands that are the brain-children of entrepreneurs at small businesses. They allow Amazon to have the depth and breadth of product that we all have come to expect from Amazon. They will both thrive as a result.

Imagine Amazon as a mall. Amazon products are the anchor store and the marketplace are all the stores that are in the mall. The relationship is truly symbiotic. Amazon, the mall, brings them in and they have the ability to shop the entire mall.

The more a shopper feels they will find what they want or discover new and interesting products, the more they go to the Amazon mall and the more everybody wins. The richer the marketplace in offerings, the more traffic Amazon generates. And traffic is the key to success.

Yes. Marketplace sellers were the stars of Prime Day 2020 and they’re gaining influence all year round. These sellers help Amazon:

Amazon may temporarily pull back on its own retail sales to give marketplace sellers the spotlight. Making brands of all sizes feel welcome and valued on its marketplace helps Amazon compete with platforms like Shopify, Etsy and eBay.

No, they haven’t become the biggest key for Prime Day – Prime Day stands alone as its own driver of sales. The third-party sellers have been Amazon’s way to exponentially grow commerce as a marketplace which allows them to sidestep many retail business challenges like brand development, inventory, design, marketing, etc.

I have to believe that Amazon wants to be able to make the case that they are THE platform that gives thousands of marketplace sellers access to a vast audience they would otherwise not have access to. And Prime Day is the perfect opportunity to make that all possible. A small business can always open their own website, but even if they are a tiny fish is the vast ocean of Amazon, it creates access to eyeballs and wallets that they would otherwise never be able to connect with. Amazon can enable competition, not stifle it.

They are absolutely sending a message of “we support you” vs “go it alone” – and I see that as a bit of a dig on platforms like Shopify that enable small business sellers to do it on their own. Makes you wonder when we’ll see other platforms (again, like Shopify) offer something similar to Prime Day in a seamless manner to consumers.

I’m not sure the marketplace sellers are the biggest key to sales success on Prime Day, but they do add excitement and additional products to the sales offerings, both on Prime Day and other days. Amazon will not likely pull back on its own retail sales. Amazon prides itself on people being able to buy anything on the site, and I don’t see that changing.

Amazon is agnostic in terms of the sources of its sales, it just wants as many sales as possible. If promoting marketplace sellers boosts sales, Amazon will continue to promote them for as long as it’s effective. No question they are (today) a critical element of the success of Prime Day and the rest of the days of the year. But in the end, the real “keys” to Amazon’s success are the platform itself and the digital web it has managed to spin around consumers in general, and Prime members in particular. So Amazon can be counted on backing whatever sells, no matter what that is — their own sales or those of marketplace vendors.

Third-party marketplace sellers have already become the backbone and engine of growth for Amazon retail sales, and this Prime Day will be no different! As we see, Amazon’s PR is working hard to promote the success of small businesses selling on their platform as an indicator to detractors/regulators of the benefits Amazon’s platform brings. In recent years, Prime Day has been mostly about two types of sales – third-party sellers and Amazon devices. I expect this year to be more of the same, and Amazon’s early shopping program will likely work very well to foster Prime Day sales from those third-party merchants. The future of Amazon in retail is clearly their marketplace full of third-party sellers. Ultimately, I expect Amazon first-party sales to become just Amazon devices and books while they let everyone else sell the rest of the “everything store.”

I think it’s a give and take relationship between marketplace sellers and Amazon. The sellers get a renowned, effective and intuitive e-commerce platform while Amazon gets to offer multiple product categories and the best prices for their members. Amazon will do whatever it can to drive traffic and sales on its platform irrespective of own or third-party sales.

No. The bestsellers on Prime Day are always Amazon’s own products and a small number of other high profile products.

That’s not to say marketplace is insignificant, but we need to keep perspective here. Amazon has a massive problem with antitrust suits and other challenges. So I’m not surprised if Amazon wants a narrative about marketplace to become the common one. But none of that will really change how the online stores work.

That’s the right thing for Amazon to say, but I agree with others who have said that it’s always Amazon pushing their own products to the forefront of Prime Day. We’ll see if they change their tune this year. I think an even mix would be a refreshing change after 2020. Small- and medium-sized businesses need the exposure.

No, Amazon’s marketplace sellers have not become the biggest key to its Prime Day Sales success, or even for the rest of the year. Instead, Amazon and its key second party suppliers will continue to carry Prime Day and Amazon’s sales all year long. FBA is an integral part of Amazon’s offerings, but certainly not their main focus. Major suppliers still occupy this niche, and will continue to do this for the near future.

Braintrust
"Yes. Marketplace sellers were the stars of Prime Day 2020 and they’re gaining influence all year round. "