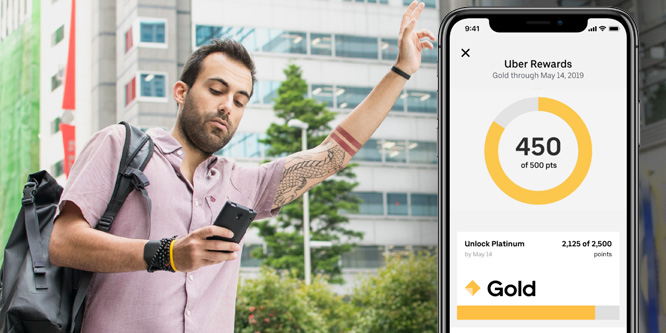 Both Uber and Lyft have programs in place to vie for their drivers’ loyalty as about two-thirds of on-demand drivers work for both companies. That battle for attention ploughed into the consumer realm last week when both ride-sharing companies announced customer loyalty programs in a span of days.

Both companies are taking the pilot market approach, but as Lyft has yet to formally launch, more specific detail is known about Uber’s program:

The program will include four tiers: Blue, Gold, Platinum and Diamond. In a nice touch at launch, Uber will automatically calculate how much users have spent during the past six months and begin them in the corresponding tier. Tier status will be readjusted every six months, instead of the traditional year, because of how frequently the service is used.

The higher two tiers are designed for “power users” such as customers who use the service to commute to and from work or ride frequently for business travel. And it isn’t just more points that power users will be rewarded with — the perks unlocked at these levels appear to be well designed to cater to this segment’s needs, offering such benefits as priority pickups at airports and fixed price protection between a rider’s two favorite places.

Expected to be similar in structure, Lyft has acknowledged its program will be using a points-based system and alluded to potential perks such as ride upgrades, access to more-experienced drivers and double-points days.

Worth noting, both companies are expected to go public in 2019 and can ill-afford to experience negatively trending market share.

DISCUSSION QUESTIONS: What impact will rewards programs offered by Lyft and Uber have on the respective ride-sharing services’ results? What can these two companies learn from retailer loyalty programs and vice versa?

Please practice The RetailWire Golden Rule when submitting your comments.
Braintrust
"My first thought was – it’s VHS and Betamax all over again! "

"The loyalty programs will be primarily a marketing play. Customers don’t use their services to collect points, they use it to travel."

"The risk in the structure adopted by Uber is the complexity of the point earning rules."

14 Comments on "Will loyalty programs drive market share gains for Lyft or Uber?"

As the two giants of the ride sharing services battle for market/mind share, loyalty programs seem like a logical, if not innovative step. Ultimately, the most effective programs are easy for users to understand and deliver meaningful value for loyalty. What both companies should realize is that there is plenty of downside risk to a poorly executed loyalty program and that consumers are bombarded by loyalty offers and programs.

My first thought was –it’s VHS and Betamax all over again!

Competition is good. Loyalty programs help keep the same customers coming back to the same brand. This is why airline programs have done well. People love to accumulate points. Once they make their choice, they will stick to it.

Once a consumer selects either Lyft or Uber, they are likely to stay with that ride provider. Therefore, grabbing the new consumers to their loyalty programs will be the first challenge for Lyft and Uber. Lessons to be learned from retail include how to attract new consumers, how to keep consumers and how to use the collected data for other purposes such as advertising from third parties.

The loyalty programs will be primarily a marketing play. Customers don’t use their services to collect points, they use it to travel. The ride upgrades and more experienced drivers won’t really add much value for a high turnover driving community where customers just want to get from point A to point B. Priority pickups might be interesting, especially at airports as a value-add but most of these add-ons are not substantial. For the power user tiers — customers will continue to spend as they always have. This tier will just introduce a cost burden that didn’t exist before and reduce overall value of the tier but may increase retention rates — a tradeoff both firms must’ve calculated. Regardless, most customers are set in their ways and have their favorite — rather than Shep’s thoughts on VHS/Betamax, it’ll be more Comcast/Verizon with the key play being switching costs and incentives.

At the moment it seems that Uber is still re-honing its reputation. There are people who simply will not use them because of past transgressions. I would focus there, frankly, on good deeds all around, not just loyalty points.

This is still a very immature industry, with many drivers driving for both. I think the loyalty programs will come in handy later. For now, Uber has a job to do, and Lyft actually needs to get its name out there more.

With both companies having rewards programs, it will be like grocery loyalty cards – customers will have both and continue to use the service that meets their need at the moment. In addition, if the program is too complicated in relation to the benefits provided, it will have a negative impact.

First of all I want to look at that Lyft offer. Access to more experienced drivers? What does that mean to potential new Lyft customers, that they take their chances until they build up enough rides? Seriously, people seem to be Uber customers or Lyft customers and — while the twain do meet — my guess is they will end up rewarding existing customers more than attracting new ones. Because of the Uber Eats feature, Uber looks to have the more attractive program, but I would have to see them side by side to make a final determination. As to the last question, these companies might just want to leverage customer data a tad more effectively than most loyalty programs do.

If the reward structure is about the same for both Lyft and Uber, it won’t spur market share gains for either company unless they inspire net-new ride-share users to try their service. The loyalty programs will definitely strengthen the loyalty of existing customers and may even inspire them to use the service more to reach a higher status level or achieve the next cash reward level.

Reward status can be a competitive thing, as some consumers already brag about their “rider rating” level. I have even heard consumers say, “I am going to tip more to improve my rider rating score.” Now consumers can brag about their reward level, which will motivate them to reach higher levels. Loyalty programs work and I am surprised it took as long as it did for Lyft and Uber to introduce loyalty programs.

I doubt that these are significant additions to their business. We need remember that the primary beneficiaries of reward programs are those people already loyal to your brand. Research into loyalty programs (by Byron Sharp, among others) shows that they rarely have the loyalty impact that is hoped for.

Not a bad play all in all. The crowd I travel with tend to either be Uber people or Lyft people and don’t interchange. Maybe (equal) loyalty programs will keep people from switching. I think a better play would be something that gives people an incentive to give up that car (or second car) and support the economics of a bulk purchase or subscription base vs. the cost of car ownership.

Uber launched its program in a year where it has been faced with a healthy share of challenges to its brand. As early as last year, Uber began exhibiting loss of market share and declining passenger utilization to blossoming competitors. Lyft continues to gain momentum and as mentioned, will launch Lyft Rewards in December. The core of the program borrows from time-tested (but maybe tired?) structures; points awarded for customer use of Uber’s core services (its ride-share operations and its food delivery service, UberEATS), and a multi-tiered status hierarchy formatted from a basic membership to elite. The risk in the structure adopted by Uber is the complexity of the point earning rules. There’s one clever benefit that Uber Rewards hopes to leverage to drive enrollment; the program gives credit retroactively for the customer’s last six months of Uber activity, accelerating the customer’s path to a reward. Beyond that, it seems Uber may have missed a bigger opportunity to focus customer marketing from the perspective of the “in car” experience. Including drivers into the program would… Read more »
2
|
0
-   Share

The competition is good. The loyalty programs (at least the detail around Uber Rewards) are unremarkable. Like most standard loyalty programs, there will be a lift in the beginning and then consumers will start to expect the rewards yielding minimal continued changes in behavior. It will work, but what’s really possible with customer data and loyalty programs is developed by refreshing offers, rewards, experiences and ways to engage over time to keep the customer interested.

It’s hard to gauge how successful each program will be when there are so few details about what each entail, no doubt due to haste in which both were launched to avoid being pipped to the post. At first glance, neither looks to provide outstanding discounts to riders, however, loyalty programs are often viewed as “free money” so I think they will help in building brand loyalty that has evaded each company thanks to an almost identical service (even the same drivers).

Looking under the hood of Uber’s new loyalty program I detect a curious distinction. The company gains almost no additional data from signing up riders to this program. Users already have the Uber app with credit card info on file.
As a result, Uber already possesses a behavioral history on each rider, as revealed by its offer to credit 6 months of rides to user accounts. Those profiles include not just recency-frequency-monetary data, but also locations, miles, times of day and even ratings by drivers.

So what’s the point of adding points? They enable Uber to create tiers and confer “status” on frequent riders and define a set of rules for doing so. Yawn. The various perks and credits are nice, but could be triggered simply on the basis of accrued dollars spent or other user behaviors it already tracks.

In short, I don’t find a very compelling value incentive here for either the company or its customers, just a more complex set of processes.

Help me out, Uber uber-mensches. What am I missing here?

Braintrust
"My first thought was – it’s VHS and Betamax all over again! "

"The loyalty programs will be primarily a marketing play. Customers don’t use their services to collect points, they use it to travel."

"The risk in the structure adopted by Uber is the complexity of the point earning rules."