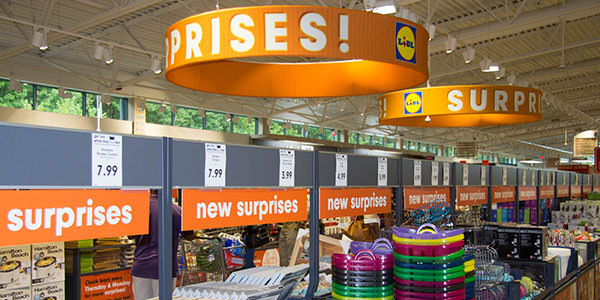 I visited five Lidl stores in Virginia last month, three in the Norfolk area and two that had just opened in Richmond. I’ve seen Lidl operations in Germany, The Netherlands, Britain and most recently Ireland, but these new stores are different. Like their European cousins, store brands account for 90% of the retailer’s products and prices were generally lower than the more traditional grocers in the two markets (I also visited nearby Food Lion, Kroger, Aldi, Farm Fresh, Walmart and Trader Joe’s stores). Unlike many of the company’s stores in Europe, the U.S. outlets are less confined and much brighter, plus they are laid out to be more convenient for the American shopper.

The U.S. Lidl stores are about 20,000 square feet, which is one-third larger than the retailer’s biggest stores in Germany, but less than half the size of most of its full-line supermarket competitors. This smaller footprint is designed to take advantage of the industry trend toward convenience and quick customer response and was validated by a series of focus groups.

Unlike its arch rival Aldi, the Lidl product mix includes national brands. Also unlike Aldi, Lidl is aggressively pushing its fresh lines, highlighting local produce and a respectable selection of fish (fresh and frozen), meat (mostly beef, but also a few lamb and pork selections) and chicken. Finally, and perhaps most distinctive from Aldi, there is a fresh bake unit that makes products throughout the day, including very tasty croissants and baguettes.

The stores also carry limited-time general merchandise items in a section called “Lidl Surprises” and covering categories as far ranging as power tools, fitness gear, watches, apparel, appliances, toys and furniture. There were croquet and badminton sets available during the opening week of the Richmond stores, as well as juice squeezers, shower curtains and a wide variety of back-to-school items.

While the current product assortment was thoroughly scrutinized to present a total offering that meets the needs and wants of the shoppers in each market, the company’s leadership is quick to note that products will be added and deleted to optimize the assortment.

My grandfather, a passionate supermarket retailer for more than 30 years, used to quip that his job was to make it as easy as possible for shoppers to buy from his store and as hard as possible to buy from his competitors. Lidl appears to have taken this mantra to heart.

DISCUSSION QUESTIONS: What are the biggest competitive advantages Lidl brings with it to the U.S. market? How will Lidl do with its launch of stores in the U.S.? How do you expect other retailers to respond?

Please practice The RetailWire Golden Rule when submitting your comments.
Braintrust
"Grocers in each region will fight to keep their shoppers from defecting to Lidl. The resulting hyper-competition will knock out the weakest players."

"Lidl will do well in under served areas and low income regions, which is where Aldi shines, so expect another price war."

"I’m surprised by many of the comments of my fellow BrainTrust members on this one. I don’t see as much risk for Lidl as others do here."

11 Comments on "Will Lidl’s fresh approach to the U.S. grocery market prove successful?"

Sounds like Tesco’s Fresh & Easy 2.0. Totally different than their European model, open lots of untested stores, put the pedal to the metal and hope for the best. I think Lidl will do better than Tesco because they are competing with grocers that are so ineffectual like Food Lion, Ahold and Farm Fresh, to name a few. It will probably just be another Aldi, which is successful but certainly never ranks high with market share leaders. Lidl should have just opened a handful of stores before making such a big commitment. However they were smart enough to have an exit strategy if they don’t work. As far as competitive advantages I would say none, other than that the major market share leaders have lost their mojo and can be taken advantage of. Wegmans and Publix will do the same. Lidl and Aldi coexist well in Europe among high-volume market share leaders and will probably do the same in the U.S. Walmart is not getting better which is good for everyone. Although Walmart probably will… Read more »
13
|
-1
-   Share

I generally agree with your points David. But I think Lidl may have a better edge in the U.S. market than Aldi. The relative emphasis on fresh and quality versus price and own label for Lidl just might be enough to turn U.S. shopper’s heads more often. Particularly with the convenient size. I think their ultimate fate may rest on the quality of their locations.

The article pointed out many of those factors that would help Lidl compete effectively against Aldi. The only factors mentioned that might provide a competitive edge against traditional supermarkets and mass merchants are price and the smaller format.

How Lidl will do will largely depend on the markets it enters and the locations it selects. Today most people have several choices and formats where they can do their grocery shopping including the already established Aldi.

First, the biggest advantage that Lidl has is that it is new and it is different. That will attract customers because they will be curious. The company has a lot to offer and will satisfy many customers. However, as with everything, Lidl will find its audience while other customers will prefer to shop elsewhere. That’s the competitor’s opportunity to learn why and to cater to those needs.

I congratulate Lidl for being different, which is just what its competitors need to be. Unfortunately, I fear that some grocery chains will attempt to compete on price alone and, if so, they will fail. Price is important, but when prices are the same, or even close, quality and service can matter a whole lot more.

There is a reason that the word “new” is the most powerful word in marketing. Shopping is about stimulating the brain with discovery and experiences. Nothing is harder to make exciting than grocery — or easier, when customer focused innovations are applied. Hats off to Ron’s grandfather who would today, I suspect, modify his comment to be that his job is to make it as easy and fun to buy from his store as possible. His plan helped make shopping ease the table stakes in retail, and he would have, I am sure, adapted to the changes in consumer culture.

“New” is wonderful (and certainly better than “new and improved”!) but I always thought “Free” was the most powerful word in marketing….

Lidl is entering a very crowded field in the markets it has chosen and it is jumping in with both feet with its high initial store count. The emphasis on low prices will attract shoppers to try the store out, but the overall experience will have to be great to keep them coming back. Established grocers in each region will fight to keep their shoppers from defecting to Lidl. The resulting hyper-competition is going to knock out the weakest players.

I’m baffled by the continued interest in (for want of a better word) foreign operators who want to open shop in this, one of the most competitive and in many cases, overbuilt markets in the world — not so much their desire, for the problem of saturation exists in other countries, but the approach. Small, generally undistinguished stores … or at least not distinguished to the casual shopper. Perhaps the success of Trader Joe’s inspires optimism.

Anyway, I wish them well, in being able to emulate the former, rather than, say, Fresh and Easy … the example that more readily comes to mind.

In any new venture (product, market, country, etc.) one needs to consider the success or failure of the offering in existing markets. Lidl and Aldi have decimated the key UK competitors and the UK market is probably closer to the US market in many ways. I would not bet against Lidl nor take them lightly. Aldi demonstrated its “silent killer” characteristics and has taken share from traditional supermarkets. If Lidl is indeed, “Aldi on steroids” with many of the positive characteristics noted in the article, not to mention more top 100 branded US products it will carry, then I predict a very positive launch in the US.

Traditional retailers continue to be squeezed by the extreme value retailers as well as the online players. Space to maneuver and respond is shrinking. Never a more pressing time to identify and implement a differential advantage strategy, keeping in mind that price and convenience may no longer be available as positive points of difference.

Lidl will do well in under served areas and low income regions, which is where Aldi shines, so expect another price war. Walmart will be ready, and the consumer will win in the short run. Who will lose? The older poorly managed independent stores, and perhaps older Save a Lot stores, and the rest will not feel much loss, as they serve a different mindset of customers. Last week we discussed the over crowded retail market, and yet we see another large supermarket chain opening up. Time will tell, but unfortunately the losers will the be local store owner, unless they are strong in perishables,service, and of course great values.

I’m surprised by many of the comments of my fellow BrainTrust members on this one. I don’t see as much risk for Lidl as others do here. I also see more potential than just under-served and and low income markets. In my area, Aldi has opened (and continues to open) stores in more traditional suburban areas where they are competing with Giant Food (Ahold), Safeway, Walmart, Target, Wegmans, and various independent organic grocers. While highly competitive, I just read through a Facebook exchange in my community where people could not stop cheering that we are getting an Aldi in a spot formerly held by an Office Depot. Someone mentioned Lidl and the conversation turned into an “I wish they were coming!” “New” is certainly a powerful motivator in the grocery market near me! I suspect Lidl has done quite a bit of research to understand the best locations to open their stores and I believe that will be the key to their success. At least initially, I suspect they may be a destination grocery run… Read more »
0
|
0
-   Share

Braintrust
"Grocers in each region will fight to keep their shoppers from defecting to Lidl. The resulting hyper-competition will knock out the weakest players."

"Lidl will do well in under served areas and low income regions, which is where Aldi shines, so expect another price war."

"I’m surprised by many of the comments of my fellow BrainTrust members on this one. I don’t see as much risk for Lidl as others do here."