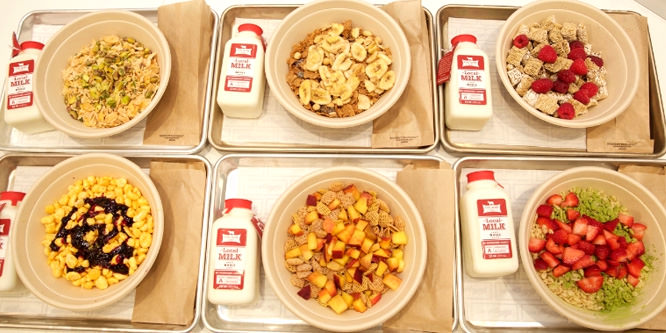 It’s been more than a few years since cold cereal has been a hot seller on the shelves. The low-carb trend and other advancements in food science have brought foods like eggs, taboo throughout the 1990s, back to the breakfast table. People with busy schedules prefer breakfast on-the-go, with quick-serve restaurants stepping up with more options. Such trends have been rough on the once ubiquitous packaged product. But in one niche, cold cereal, has been in demand. Since 2008, New York foodies have talked up the “cereal milk” dessert at Momofuku Milk Bar. Now one of the oldest cereal manufacturers has gotten hip to the trend.

On July 4th, Kellogg’s is opening a cereal café in Times Square, created in partnership with Christina Tosi, founder and owner of Momofuku Milk Bar, according to Fortune. The café will be open all day and will offer a bowl of cereal with a 12-ounce container of milk for $7.50 (with a $2 added charge for yogurt or soft-serve ice cream). The menu will also offer foodie-targeted add-ons such as matcha and toasted pistachios. The café design includes an experiential element — customers will collect their orders from cupboards meant to resemble those in a home kitchen.

Other manufacturers whose products that, once popular, are now considered passé have been making similar attempts at targeting the experience-loving, big-spending foodie audience. In January, Crain’s reported that Pepsi would be opening a restaurant called Kola House in the spring, featuring specialty drinks and trendy, themed food. The Kola House website, however, still advertises the restaurant as “Coming Soon.”

Whether the Kellogg’s café concept will thrive beyond the Times Square destination remains to be seen. New York City is notorious for being able to bear trendy, single-item theme restaurants that might not fly elsewhere. Macaroni and cheese, rice pudding and pomme frites have all done well at standalone shops in Manhattan.

And even within Times Square, success is not a foregone conclusion. Toys“R”Us and Aeropostale have both closed their Time Square flagships within the past year.

DISCUSSION QUESTIONS: Will Kellogg’s Times Square cereal café be a success? Can the company hope to learn anything applicable to cereal sales nationwide from this experiment?

Please practice The RetailWire Golden Rule when submitting your comments.
Braintrust
"I don’t think a cereal-only restaurant will be a hit, especially at $7.50 a serving. "

14 Comments on "Will Kellogg’s cereal café snap, crackle or pop?"

$7.50 for a bowl of cereal? You can buy a whole box for that, along with milk. If the goal is to get people thinking differently about cereal, this is a good publicity stunt. I don’t see it surviving in the long run.

Disclaimer: I like cold cereal as a breakfast and eat a number of Kellogg’s brands. However, I don’t think a cereal-only restaurant will be a hit, especially at $7.50 a serving. May help create more brand awareness but will not be successful as a restaurant concept.

Nope. I agree with Max — $7.50 for a bowl of cereal — that would buy you a really “big breakfast” at most fast food joints. Seems to me they have three things working against the category: convenience, carbs and boredom. Let’s face it, cereal is boring. Unless manufacturers can come up with some really exciting cereals, which I doubt, the long slow decline will continue and a cafe in Times Square will do nothing more than generate PR for a few months. The one plus is perhaps Kellogg’s will learn a couple of things about eating habits and taste preferences if they spend a lot of time observing consumers here.

This cafe could be a fun experiential center if they encouraged some play time with their characters, gave people an opportunity to mix cereals together, let people get creative by inventing jingles, etc. They should strive for a way to encourage consumers to express meaning and emotion around cereal. Otherwise it’s just an expensive and boring experience that people can easily skip.

I’m trying hard to be positive here, but I can’t come up with a single reason why I’d pay $7.50 for cold cereal instead of $3.25 for an Egg McMuffin.

I think they have succeeded in making a bowl of cereal even more expensive than ordering through room service at nearby hotels. #whatweretheythinking?

It is interesting to see how often business execs, especially Millennials, “invent” something “new” because they have little knowledge of business history. A cereal only store was opened (and failed) several years ago in NYC.

PT Barnum said, “There’s a sucker born every minute,” so if this is successful, than the logic holds true. Have we run out of great ideas? Absolutely not, but this isn’t one of them. $10 beers at a stadium is a rip off, but it is a captive audience. This will not fly.

I would not invest my 2 cents into this concept. That’s all Folks!

I have watched similar cereal shops open and close in rapid succession across the United States as the novelty quickly wears off. Also, consumers have shifted away from wanting to eat cereal as consumers prefer to eat more protein. Instead of Kellogg’s opening up a cereal-only café, I strongly advise Kellogg’s to increase their portfolio of protein-related brands. The following companies would be ideal for Kellogg’s to acquire:

This really isn’t a store as much a promotion — think of it as a three dimensional billboard — and it’s ALREADY successful…it got our attention, didn’t it? It will remain open as long as it continues to bring Kellogg’s publicity.

Two observations spring to mind — we do still believe in freedom of choice, I think, but on the other hand, fools and their money are soon parted. This concept is working in London although many were surprised by it. There’s just no accounting for folks.

I’m with those who see no merit in the concept. However, families on vacation in NYC do end up in Times Square. There may be those who see it as a convenient way to get their kids to have at least some breakfast. And if that’s the case, Mom and Dad will have some cold cereal as well. But big and long revenue stream? I don’t think so.

Will Kellogg’s cereal café snap, crackle or pop? I think it will fizzle. You’d think that focus groups would answer this before going into business. Maybe they have — and maybe they know something that we don’t.

Braintrust
"I don’t think a cereal-only restaurant will be a hit, especially at $7.50 a serving. "