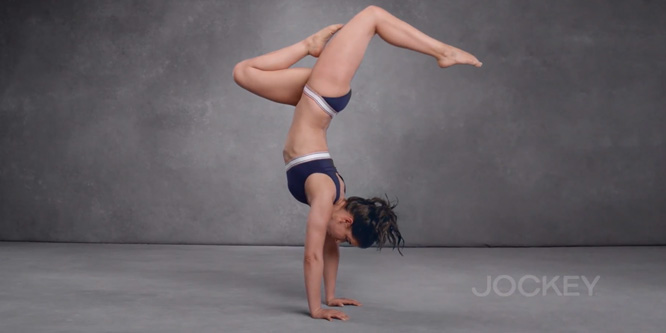 Jockey International, the premium underwear and apparel brand, announced that it will open its first-ever pop-up shop at Simon’s edit @ Roosevelt Field space, which provides a showcase primarily for consumer-direct brands without a current physical store presence.

The 1,700-square-foot shop will feature an assortment of Jockey products including men’s and women’s activewear, loungewear, sleepwear and undergarments. It will include an underwear bar featuring “mix-and-match” styles for men and women. Shoppers will find exclusive promotions and flash happy hour sales at the pop-up as well.

The Jockey pop-up, which will be open through January, will also feature the new Jockey x Victoria Arlen athleisure collection. Ms. Arlen, who fell ill as a child and remained in a paralyzed state and unable to communicate for four years, set a world record in swimming two years later at the Paralympic Games. She went on to relearn how to walk and further inspired others as she competed in Dancing with the Stars and joined ESPN as a sportscaster before authoring a best-selling book on her experience.

“We have been eager to launch our first pop-up store and the edit @ Roosevelt Field provides us the flexibility to showcase Jockey products in an exciting and engaging way,” said Melissa Latham, vice president of Jockey’s North American retail division, in a statement. “Customers shopping in Jockey at the edit @ Roosevelt Field will find a fun, enjoyable experience and, of course, premium, quality-crafted apparel.”

Jockey is the fifth company to work with Simon since it launched its edit @ Roosevelt Field pop-up concept in 2017. The mall operator previously partnered with Clientele, Egg Baby, Hope & Henry and Revtown USA.

Hope & Henry announced in May that it would open 15 stores in Simon properties across the U.S. following its edit @ Roosevelt experience. The retailer creates high-quality clothing using organically grown cotton and shares its profits with the people who sew its garments.

Matthew McCauley, Hope & Henry founder, said, “Edit @ Roosevelt Field was instrumental in bringing Hope & Henry to an important new stage and we could not have opened this many stores, this quickly, without Simon.”

DISCUSSION QUESTIONS: What will be the keys to success for Jockey as it launches its first-ever pop-up shop at edit @ Roosevelt Field? Will the new Victoria Arlen collection inspire greater loyalty for the Jockey brand?

Please practice The RetailWire Golden Rule when submitting your comments.
Braintrust
"Jockey is taking the right steps to reimagine what the brand could be by going direct-to-consumer, offering additional promotions and exclusive offers."

"This pop-up shop will highlight that Jockey is more than great basics."

"What seems to be going on is a brand saying, “we went away, but now we are back.” The real issue is, will consumers get it or care?"

10 Comments on "Will Jockey inspire brand loyalty with its very first pop-up shop?"

Pop-ups when done correctly work and that’s all that needs to be said here. Jockey will have great success. They have brand recognition, and the pop-up will help them expand brand awareness and share products that new and existing customers may not have seen. Pop-ups allow the busy customer walking through a mall to stop and quickly see something without the hassle of having to go into a store to find what they may want.

I see this as not only being successful but likely laying the groundwork for Jockey to open additional pop-ups in other malls. As for the Victoria Arlen line, it’s a nice touch and many customers will take notice. It’s a fantastic story and those individual experiences stand out.

This is definitely as much a brand play as a retail play. My opinion is that it will have an effect but brand lift will be really hard to measure because of the geo-specificity.

Even though Jockey offers fashion items, its image is traditionally pre-packaged goods that are displayed at the back of department store lingerie sections. This pop-up shop will highlight that Jockey is more than great basics.

Pop-ups like this are a smart move for a mall looking to increase its draw. And up its cool level. Jockey’s relationship with Victoria Arlen will attract shoppers as will exclusive promotions. Based on the product, there is a lot of potential for those Happy Hour sales.

I would be interested in understanding what the strategy of Jockey management behind this pop-up actually is. Is it to open non-outlet locations in Simon malls like Hope & Henry? Doesn’t feel like it. Is it to drive traffic to the jockey.com website? Perhaps. Pop-ups sometimes seem like the next shiny object for brands and I don’t think they work for all. The key to the success here is offering the customer an experience and service that they would not normally get. Looking forward to checking the pop-up out to see if this is happening.

The Jockey brand is out of date and disconnected with consumers as a DTC business. I believe it could be reinvented and successful with a meaningful strategy. Opening a physical location addresses the distribution and from my point of view that is the least of their constraints. The design is extremely outdated, Calvin Klein does a better job with basics. If Jockey wants to penetrate the DTC market a heavy investment in design and fabrication is necessary. There are DTC underwear brands with value propositions that address a hole in the market or offer a point of differentiation. Focusing on branding and digital shopper experience would be a better investment. The imagery and presentation of online products is subpar. It looks like a discounter with the lack of uniformity and poor product images. Top sellers are: nude, black, white, and cheeky. Jockey is a crayon box and uses the word “tan” for a few offerings, cheeky is not even a style that is offered for women. They have a long way to go in my… Read more »
1
|
-2
-   Share

Pop-up shops when executed properly could be an outstanding form of media for brands, and Jockey is making the right move to help drive some brand recognition beyond their presence in the back of most department stores. Jockey is taking the right steps to reimagine what the brand could be by going direct-to-consumer, offering additional promotions and exclusive offers.

Once upon a time … a very long time ago it was … Jockey was to men’s underwear what Kleenex was to facial tissues, and Xerox was to copies — a brand synonymous with an entire product category. But those days are long past. Fashion has changed. Retailing has changed. And, most importantly, consumers have changed. We’ve seen “yesteryear” brands, like Old Spice and Izod, stage remarkable comebacks, which ought to teach us that anything is possible in Brand World. But the question is, what is Jockey trying to do, and — depending on the answer — is a pop-up additive or dillutive to that effort? What seems to be going on is a brand saying, “we went away, but now we are back.” The real issue is, will consumers get it or care? The pop-up shop is a good way to get some media focus — as evidenced by the fact we are all commenting on this story. Athleisure gives the Jockey brand another way to reenter the market that avoids some of he… Read more »
1
|
0
-   Share

When done well, pop-ups can attract new customers and energize a brand. Jockey’s success will depend on whether its products resonate with today’s shoppers.

It’s nice to see Simon Properties leaning more into the world of pop-ups and evolving a little bit. Same can be said for Jockey. I wonder though if this is their shot back at real relevancy after their segment got so crowded with competition. With DTC taking so much of their market share it seems like a logical move for them, but I wonder if partnering with Simon is the right move? Did they really need Simon to help them reach Main Street America? I mean we are talking about one of the better known companies of the 20th century here. Jockey’s greatest asset in my opinion is their heritage and history. Like previously mentioned we have seen many companies that fell out of the spotlight coming back into play and relaunching, but the question is can they hang? You have your Duck Head’s and Eddie Bauer’s and the likes, that are great examples of this. I do however, think the Victoria Arlen is a great touch, it is a really great story and that… Read more »
1
|
0
-   Share

The problem with brands like Jockey is that it is hard for them to write a new story when their old story is so dominant. Younger consumers are writing their own stories with brands like Third Love, Pink and even LULU versus aligning themselves to what I would term a “legacy brand.” The only exception to this lately has been Champion, but they have been able to successfully use influencers to cross over into more of a streetwear vibe.

Braintrust
"Jockey is taking the right steps to reimagine what the brand could be by going direct-to-consumer, offering additional promotions and exclusive offers."

"This pop-up shop will highlight that Jockey is more than great basics."

"What seems to be going on is a brand saying, “we went away, but now we are back.” The real issue is, will consumers get it or care?"