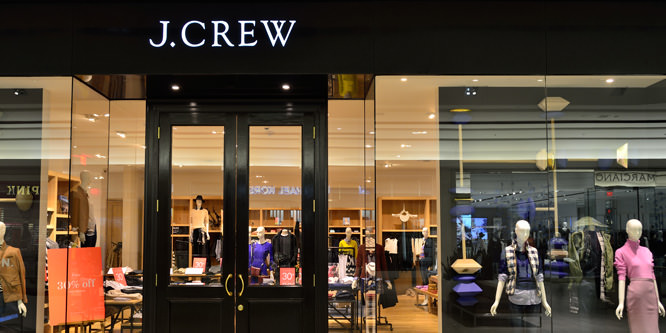 J.Crew announced yesterday that its president and longtime creative director, Jenna Lyons, was leaving the company. Ms. Lyon’s departure comes after the several years of sales declines for the retailer.

Ms. Lyons, who has been at J.Crew for 26 years in a variety of positions, was named president and executive creative director back in 2012. She will remain as a creative advisor to the company until her contract expires in December.

“Somsack and our design teams have a deep understanding of the aesthetic and style our customers rely on J.Crew to deliver, with a proven track record of driving creative vision in-line with our brand DNA,” said Mickey Drexler, chairman and chief executive of J.Crew, in a statement. “We are excited to extend Somsack’s vision across all design categories and look forward to the team’s contributions. As always, delivering the very best product, value and brand experience across channels is our top priority.”

J.Crew has been reworking designs in recent years and exploring partnerships in an effort to turn its business around. Last year, the retailer began selling an edited assortment of its flagship J.Crew brand at select Nordstrom full-line stores and on Nordstrom.com. The company had previously seen success selling Madewell in Nordstrom stores, expanding from an initial test of 20 stores to 76.

According to CNBC, J.Crew is feeling the burden of $1.5 billion in long-term debt. The company, which was acquired for $3 billion in 2011 by TPG Capital and Leonard Green & Partners, saw same-store sales fall seven percent last year following an eight percent drop the year before.

DISCUSSION QUESTIONS: Why do you think J.Crew has struggled in recent years? Will a change of head designers be the answer to what has been ailing J.Crew?

Please practice The RetailWire Golden Rule when submitting your comments.
Braintrust
"I think a change in head designer is probably its best chance to freshen up its look for a new audience."

"For Millennials, J.Crew is what our parents and cool teachers wore."

"There is a common theme here of competing and failing against fast fashion leaders Zara, Forever 21, H&M and others."

Merchants lose their touch, the shopper’s tastes change and then there is fast fashion. All those contribute to the decline of chains like J.Crew. Then there’s the final question: how large is the chain supposed to be? What’s the true size of its target market?

It strikes me that J.Crew may have over-expanded much like Gap. But I think a change in head designer is probably its best chance to freshen up its look for a new audience. Then they’ll have to decide how many doors the chain really needs. That might be the hardest of all.

Not only that, but as brands grow they become victims of their own success when they develop a distinctly “J.Crew” look. Many consumers don’t want it to be so obvious that they got something from J.Crew, Gap, Coach, you name it. In addition, as the brand identity becomes established, it can serve to narrow the target market in that some consumers will look at a product and say “it’s not for people like me.” Whereas before, they may have tried and even liked the product.

Product development is the lifeblood of a brand like J.Crew. There is no question that the company’s merchandise assortments lost their way for the past several years and Mr. Drexler has been frank about design mistakes in his public statements about J.Crew’s sales problems. While retailers are chasing the success of fast fashion stores like Zara and Forever 21, these tactics may not be right for J.Crew’s preppy brand identity and higher-end positioning.

As to the change in creative directors (after many years where Ms. Lyons’s efforts were instrumental to the company’s success), I guess it’s like a baseball team: If you’re the owner or the GM, it’s easier to fire the manager instead of all the players.

We see in this discussion a nicely constructed message which informs us that J.Crew is mission-focused and understands what the company’s loyal customers want and expect. There is no mention of the rapid decline in loyal customer membership or why the remaining loyalists are spending less. Maybe they should getting in touch with today’s market and consumers. Just a thought.

For Millennials, J.Crew is what our parents and cool teachers wore. Although the clothing offerings are still fresh, it’s not surprising that J.Crew is having more success with a younger audience under the modern, organic nameplate of Madewell. Instead of focusing on revitalizing a tired name, J.Crew could branch out into more labels that will pull in a younger customer base.

The assortments, merchandising and pricing strategies have simply not been effective or resonated with the Millennial generation. J.Crew’s challenges extend beyond changing their head designer. Simply put, the brand has become stale and lost the “it” factor for a multitude of reasons:

Perhaps some new blood and design direction will help, but the problems extend beyond the clothing. The brand itself needs to undergo a transformation.

This is so true and is true of too many apparel retailers. This is truly becoming a crisis (such as it is).

There is a common theme here of competing and failing against fast fashion leaders Zara, Forever 21, H&M and others. J.Crew has a merchandise problem and perhaps new design leadership can revive them. They’ve simply lost touch with their audience in recent years and younger generations have moved on to other brands. Then there’s the question plaguing many other retailers — do they have too many stores and are their stores in the right places to reach their audience? One interesting point no one here has brought up yet is their e-commerce performance and in-store experience. Maybe it’s time that J.Crew looks at how technology can support their shopping experience and take a closer look at their online performance.

Fashion is a notoriously fickle business, with individual companies enjoying cycles of success or failure that are impossible to predict and even hard to explain after the fact. No one of us here is likely to “know” what their problem(s) is(are), beyond the trite observation that they don’t have what people want. And of course they suffer from what ails everyone: there are simply too many stores selling look-alike merchandise.

As for the store-on-store decline: while at first glance it looks awful, do such metrics continue to have any meaning with the shift to online? Efforts to tweak the figures by apportioning internet sales — primitive though they may be — are becoming crucial to decide who’s “failing” and who isn’t.

J.Crew has struggled because its audience grew up and went on to another life style, another look and a new attitude. All mall-based apparel retailers face the same challenge — constant reinvention. That’s not new. What is new is the new round of closet fillers are different and their life expectations are different, together they are unrecognizable Fashion remains important but less important than other aspects of life. Wardrobing no longer means constantly filling the closet. Functional utility matters and special is an infrequent accent. It’s not just the assortment that must change, it is the entire shopping experience. Merchants, operators, HR, messages, engagement — all must be aligned on the same target and what it will take to get onto her consideration list. It’s not just the goods therefore it’s not just designers. J.Crew is the latest apparel retailer to face this existential challenge and like so many that have closed up shop, it is not assured of success unless it defines its target and builds a selling model that will surprise and delight.… Read more »
0
|
0
-   Share

Do we think it’s all assortment based? I don’t know if their styles are what’s hurt them or their frankly pretty terrible CX on their eComm site. There are a ton of ways they could merchandise better on that site: smarter tools to help people put together great looks, more aggressive social uploads for how people have made looks their own, etc. And the overall experience — their BOPIS is a weird hybrid where they send things to your local store (thereby not leveraging in-store inventory AND incurring shipping costs to the store AND likely incurring markdowns on inventory they could have otherwise sold full price using omnichannel…), not offering free-shipping except for orders over $150, etc.

While there is no question that assortment drives purchases, it also strikes me that many retailers are overlooking the massive opportunity to reengage by offering a more friction-free experience to new and old customers alike.

Braintrust
"I think a change in head designer is probably its best chance to freshen up its look for a new audience."

"For Millennials, J.Crew is what our parents and cool teachers wore."

"There is a common theme here of competing and failing against fast fashion leaders Zara, Forever 21, H&M and others."