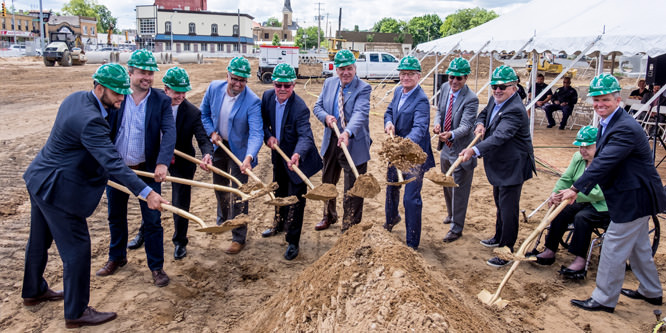 It turns out that Meijer, originator of the supercenter concept, didn’t go small enough with its last attempt at a more modestly sized format. Now, the chain is opening a new neighborhood grocery store concept that is downright tiny in comparison to the 200,000-square-foot monsters that have made Meijer a retailing force across much of the Midwest.

Yesterday, marked the groundbreaking for Meijer’s new Bridge Street Market in the chain’s home town of Grand Rapids, MI. The 37,000-square-foot store is a distinct departure for Meijer from its supercenter format. It is intended to offer customers in the city’s downtown area a place where they can take care of “fill-in” grocery shops in between trips to the chain’s big stores.

Meijer recently shuttered two 90,000-square-foot stores in the Chicago area. President and CEO Rick Keyes told MLive/The Grand Rapids Press that those locations were an attempt to recreate the chain’s supercenter in a smaller footprint.

Meijer sees its newest concept as a neighborhood fixture that can be replicated in other urban areas where space is at a premium. The Bridge Street location will serve as an anchor for a mixed used development in Grand Rapids’ downtown. The store, which is targeted to open in the early fall of 2018, will feature fresh produce, a deli, fresh-cut meat, a bakery, groceries, cleaning and paper products.

“Our customers are asking for this,” Mr. Keyes told MLive/The Grand Rapids Press. “We think there are a lot of communities that would benefit from a Bridge Street type market.”

In an interview with MiBiz, Mr. Keyes said Meijer is seeing “a lot of customers” moving into downtown areas. The chain is hoping to take what it learns from its Bridge Street location and open similar stores in other communities.

“The supercenter will continue to be the engine of our business,” Mr. Keyes told MLive/The Grand Rapids Press. “We will continue to focus on that and growing that. This will be an alternative format that allows us to match a need our customers are telling us they want.”

DISCUSSION QUESTIONS: Do you see a Bridge Street-like concept having legs for Meijer beyond Grand Rapids? Do you see any negatives for the chain’s supercenters?

Please practice The RetailWire Golden Rule when submitting your comments.
Braintrust
"Meijer could put this kind of store in the city of Detroit and give Whole Foods a run for their money!"

"There are a number of pitfalls that come with downsizing, most relating to SKU selection, which also impacts the store’s variety image."

"The concept is a sound one to downsize into metropolitan markets and may have more validity with the impending Amazon/Whole Foods deal. "

12 Comments on "Will its newest small store format make Meijer a downtown destination?"

Kudos to Meijer for once again starting with their customers and giving them what they want. If the concept flies in Grand Rapids, it seems it would work in Detroit and Chicago and other larger Midwestern cities.

Meijer could put this kind of store in the city of Detroit and give Whole Foods a run for their money!

I’ve never heard Whole Foods was successful in Detroit. Only a coded message that they exceed their (low) expectations. Keep in mind, public money was used for Whole Foods.

This is just a novelty and experiment for Grand Rapids. These types of stores only work in densely, vertically populated urban areas. Grand Rapids does not fit this mold so this is nothing more than a good deed gesture. I doubt they believe they will make money. I’ve seen Meijer expand rapidly in the past few years only to see low-volume stores waiting for competitors to close. When Kroger bought Roundy’s that took a lot of hope away from Meijer. Lucky for Meijer they are debt-free and don’t have to answer to Wall Street.

With the re-emergence of mixed-used development, small grocery formats should be looking at mixed-used structures rather tan homestead subdivisions that have already proven a small-format failure for both Tesco and Walmart.

Meijer is following other retailers into a competitive space with higher operating costs per square foot than their massive superstores. (And Target in particular is bringing more name recognition to big urban markets.) But Meijer’s biggest challenge is to downsize its assortments to a much smaller footprint, even assuming it is only trying to cover the grocery side of its business instead of general merchandise. If Meijer had trouble editing down to a 90,000 square foot store, this will be an even tougher task.

Meijer continues to experiment with offerings and store size. The concept is a sound one to downsize into metropolitan markets and may have more validity with the impending Amazon/Whole Foods deal. The alternative to supercenters borrows heavily from Walmart Neighborhood Markets, focusing on fill-in and fresh. I agree with the earlier comment that Grand Rapids does not truly represent the ultimate target market. However, it could be an excellent opportunity to “roll and fix” the smaller footprint options.

Meijer has a loyal following and extending their brand to urban markets is a smart strategy. It is similar to Target and Kohl’s approach to open small format stores in urban markets.

Meijer enthusiasts (Meijer Maniacs) who live in big cities will appreciate the opportunity to shop at Meijer.

I don’t see any negatives to this strategy, as it has great potential. Meijer will obviously have to change some of its logistics and merchandising processes to adapt to the small format stores that have less backroom space and much fewer employees, but I believe this strategy will only strengthen the brand.

First, for the record, I am — and have always been — a great fan of Meijer. I believe that under Fred Meijer the company came to embody many of the things I most admire in retail. That said, I’ve never been a fan of the past and I think the new management team has done well maintaining its hold on what Fred and his team built in what — in retrospect — were far calmer competitive times. So, biases out of the way, let me say that it isn’t size that makes a difference, it’s the value proposition. Walmart supercenters, themselves sort of the grandchild of the Meijer model, did well, but initially, Walmart’s Neighborhood Markets did not. Why? Because the value proposition of Neighborhood Markets wasn’t compelling to shoppers. The same principle applies here. Are downtown markets like Detroit in desperate need of decent quality produce, perishables, etc.? Yes, of course. Does Meijer have a unique value proposition tailored to downtown consumers? That remains to be seen. Decades ago, Meijer introduced its version… Read more »
3
|
0
-   Share

Assuming Meijer did their homework on the location and it provides the necessary elements to attract shoppers, the success of their smaller formats will be focused on carrying the right items, having the right departmental mix and providing an inviting presentation to give shoppers a viable but efficient full basket alternative to larger traditional supermarkets. There are a number of pitfalls that come with downsizing, most relating to SKU selection, which also impacts the store’s variety image.

I would also suggest doing some basic consumer research in about 6 weeks after opening to better understand who is patronizing and to what extent. Doing fine tuning early on with a new format is critical.

I wish them well, but let’s be candid here. They’ve opened a supermarket, no less, but not anything more, either (I imagine there are quite a few supermarkets in Michigan). Even if it’s twice as productive as their superstores, they’ll need to open 150 of them to equal even a quarter of the volume of their current stores.

Meijer is trying to address a trend that many other large format store brands are trying to address — how to best serve potential customers in dense, urban areas where large size doesn’t always work. Grocery in particular tends to thrive in small formats in major cities. Will it work for Meijer? Hopefully they’ve looked at the demographics and made a wise choice. Can they replicate it other major cities? That’s trickier — and the assortment will be key. In those smaller sizes you can’t carry the same number of SKUs as your supercenter. Do they go with an eclectic curation similar to a Trader Joe’s approach, or do they favor a best price/deal on the most popular items? To succeed with the former – the curation is critical and you must know who the local customers are and what they like. For the latter approach, you have to differentiate from the other brands trying to do the same thing — or you’re left with a price battle. Meijer will have to tread carefully here… Read more »
0
|
0
-   Share

Braintrust
"Meijer could put this kind of store in the city of Detroit and give Whole Foods a run for their money!"

"There are a number of pitfalls that come with downsizing, most relating to SKU selection, which also impacts the store’s variety image."

"The concept is a sound one to downsize into metropolitan markets and may have more validity with the impending Amazon/Whole Foods deal. "