Will H-E-B conquer Dallas-Fort Worth? 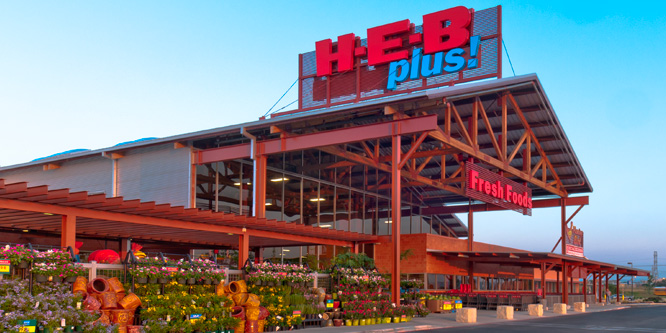 H-E-B, after years of purchasing land in the area, announced plans to open its first flagship stores in the Dallas-Fort Worth metroplex. The first two stores in Frisco and Plano will open in fall 2022.

While the H-E-B eponymous banner may be new to the market, the grocer has had a presence in D-FW since 2001 with six of its Central Market upscale specialty concept stores. Larger H-E-B locations serve communities in surrounding areas and its Favor delivery service operates in D-FW.

H-E-B is expected to strongly benefit from its local roots as one of the largest privately held companies in the state, with 420 stores across Texas and Mexico. The retailer is known for its strong private label lineup, including its Texas-shaped tortillas, as well as local products, loyal employee base and community support.

“It is a Texas-based company, and Texans are always Texas first before they’re anything else,” Craig Rosenblum, a Dallas resident and VP at Inmar Intelligence, told San Antonio Express News.

H-E-B is also known for its competitive pricing, innovative layouts and friendly employees.

In 2019, H-E-B moved ahead of Trader Joe’s to become the top U.S. grocer in dunnhumby’s annual Retail Preference Index. At the time, dunnhumby traced H-E-B’s progress to a “sustained focus and excellence on assortment relevance and private brand.”

In 2020, Amazon topped dunnhumby’s rankings due to its importance during COVID-19, but H-E-B came in second.

Pam Goodfellow, director of retail insights at Kantar, told The Dallas Morning News, “This latest push into D-FW signals that H-E-B’s intent is to emerge from the pandemic as a long-term winner.”

DISCUSSION QUESTIONS: How do you think H-E-B will fare in the Dallas-Fort Worth market? What advice would you have for H-E-B as well as their soon-to-be D-FW competitors?

Please practice The RetailWire Golden Rule when submitting your comments.
Braintrust
"They’re going to really need to provide something different from Kroger, Albertsons, and Walmart – but they may be the chain to do so."

"I’m sure the battle will be fierce, but as a private company it has the luxury of a longer-term view."

"Just when I think the sprawling DFW area is “overstored,” I get proved wrong. H-E-B conquering the metroplex? Why not?"

13 Comments on "Will H-E-B conquer Dallas-Fort Worth?"

H-E-B is an exceptional retailer, so it has every chance of winning the hearts and dollars of consumers in the D-FW area. Proof of this can be seen at existing locations, where H-E-B has maintained or grown market share, even in the face of increased competition and the expansion of rivals from out of state.

One of the underpinnings of H-E-B’s success is that it modifies the assortment and the services at each store to ensure they are attuned to what local shoppers want. The company thinks very carefully about how to target an area. This, alongside the view that pricing should be fair and competitive, that service should be excellent, and that consumers should be given great choice, makes H-E-B a winning proposition.

H-E-B has always had a great reputation, which is going to be needed to crack a fairly saturated market. They’re going to really need to provide something different from Kroger, Albertsons, and Walmart – but they may be the chain to do so.

I’ve visited the Dallas-Fort Worth area about once a year for the past 20 years and often do stores visits with clients and on my own (yes, I know I have a sad life). With the exceptions of Central Market and a few great ethnic specialty stores, there really isn’t anything to write home about in the market. It’s just plain vanilla food marketing with little pizazz or passion. A much bigger H-E-B presence will push Albertsons, Kroger and the rest to innovate or risk relegation to the retail scrap heap.

I grew up in the DFW area and the retail explosion is non-ending. It boggles my mind every time I take business trips “back home” to see apartments right on the edge of freeways and views blocked out by high-rises. Restaurants and shopping centers are crammed with people. In other words, DFW is a hugely competitive market yet one that seems to keep pushing the limits in terms of store growth and population density. Just when I think the sprawling DFW area is “overstored,” I get proved wrong. H-E-B conquering the metroplex? Why not?

I’d say it should be pedal to the metal for H-E-B in D-FW. Hard to think of a better grocer, especially of their size. Intelligent, strategic growth, excellent staff (including execs) great customer service and terrific product. It is no wonder that in every national survey they rank so high. The only close competitor in the customer’s mind is Hy-Vee out of Iowa, but there is a lot of space in between those two grocers. I’m a big fan and I’m glad to see them moving — go forward with confidence!

H-E-B may not be in a class by itself but the class it is in is a very small one. Every time we visit our friends in South Texas one of our stops is at a local H-E-B location for two reasons. One is to buy things we need and the other is to see what a classy supermarket is like. They will reposition their competition from being top of mind to being just the other supermarkets.

Most definitely! H-E-B has had property in the DFW area for 20+ years. One thing H-E-B knows is how to be strategic (real estate locations, distribution centers, etc.) and when to move in at the right time and the right time is now. H-E-B has locations on the outer part of the DFW metroplex and they have been very successful because shoppers will travel long distances to shop there. It will also change the overall pricing in DFW – Kroger, Albertsons, and Tom Thumb will feel the heat (they have many times before) with lower prices, a wonderful private/house label program with unique products for Texas developed by Texans, and exemplary customer service. It’s about time.

Between them and the direct competitors, Kroger and Albertsons, there will be no contest. I would never bet against H-E-B. If I were Kroger or Albertsons, I would be very concerned. While they are reasonably good operators, they are not in the same class as H-E-B. H-E-B comes with ammunition that is not available to the others, either because of business definition, mindset, or inertia.

While D-FW is a different market, H-E-B already has a presence there and it is still Texas. While Kroger and Costco are formidable, H-E-B is both local and differentiated. I’m sure the battle will be fierce, but as a private company it has the luxury of a longer-term view. I would expect H-E-B to carve out enough market share to make it a successful entry.

I have no doubt that H-E-B will be a success in the Dallas-Fort Worth market. Its pedigree, reputation and current position with some related retail offerings in the market make this move a natural. Plus, with the growth of online grocery shopping, it does not need to saturate the market with brick-and-mortar stores to make a difference in the marketplace. To DFW competitors, do not wait until the fall to begin your defense of your market position. It is important for these competitors to engage in a serious self analysis and preempt any H-E-B moves before it enters the market. Once it is operating in the marketplace it is too late.

H-E-B has made investments in digital, has continued to innovate with their physical store format, is know for being a great place to work and treating their employees well, and knows Texas consumers as well as anyone. They are going to do well, as will Costco, Walmart and Sam’s Club. Others with unique niches, such as Whole Foods and Dollar General, will also do well. This will be an interesting case study to observe over the next 10 years.

H-E-B has a proven formula and I have no doubt they can bring solid competition to the established grocers in the D-FW area. They are experts at maintaining a local flair to their offering and that should work well for them in D-FW. Add to that their reputation for service, and they will make grocery very competitive in the market!

On a scale of 1-10, I would give the chances of H-E-B being successful at winning over the Dallas market a 10.

Interestingly, they used an opposite approach to the one they used several years ago in Houston where they entered the market with what were smaller stores called H-E-B Pantry stores and then started replacing them with larger stores until they now control the market

Their approach to treating not just every market, but every store almost as a standalone operation helps them tailor each store to the demographics of the area.

Braintrust
"They’re going to really need to provide something different from Kroger, Albertsons, and Walmart – but they may be the chain to do so."

"I’m sure the battle will be fierce, but as a private company it has the luxury of a longer-term view."

"Just when I think the sprawling DFW area is “overstored,” I get proved wrong. H-E-B conquering the metroplex? Why not?"