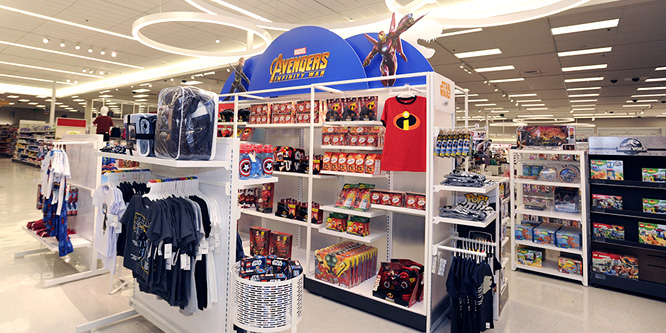 Retail, much like the universe, abhors a vacuum. A case in point is the baby and toy categories where Amazon.com, Bed Bath & Beyond, J.C. Penney, Party City, Walmart and others are chasing after the millions of dollars in annual sales that previously went through Toys “R” Us and its sibling chain, Babies “R” Us. As it turns out, there is concrete evidence that at least one chain — Target — is a direct beneficiary of the two chains that died under the weight of $5 billion in leveraged buyout debt.

In its second quarter earnings announcement, Target highlighted both the toy and baby categories as factors in its 6.5 percent comparable sales growth. Sales increased in the high teens for baby apparel and double-digit gains in the toy category. The chain said that it increased inventory in the two categories to take advantage of the opportunity created by the closing of hundreds of Toys and Babies “R” Us stores around the country during the first half of the year.

Speaking on the chain’s earnings call this week, Mark Tritton, Target’s chief merchandising officer, said the retailer is expecting to see continued traffic and market share gains in the two categories “for the rest of the year and beyond.”

Target CEO Brian Cornell told CNBC’s Becky Quick that “with Toys ‘R’ Us going away, with Babies ‘R’ Us going away, we’ve got to make sure we are taking more than our fair share of that market share and that’s going to drive even more trips to our stores in the back half.”

Considering the strong quarter, it will be interesting to see if investors who criticized Target for aggressively pursuing the lower margin toy category have a change of mind.

“The toy category is not a growth category,” Steven Roorda, an analyst and portfolio manager with Stonebridge Capital Advisors, told Reuters in February. “U.S. birth rates are moderating and along with children using other devices to access entertainment at an earlier age [that] means that the toy category has been under pressure as evidenced by what is going on with [toymaker] Mattel.”

DISCUSSION QUESTIONS: Do you agree with Target’s strategy of going after the toy and baby categories despite concerns about margins, particularly in toys? Do you see this as a short-term play or a focus for Target over the long haul?

Please practice The RetailWire Golden Rule when submitting your comments.
Braintrust
"Good move, and while margins may be lower than apparel and furniture they're certainly higher than groceries."

"It’s an excellent strategy by a well-operated retailer who knows how to mix/manage higher and lower margin categories."

"Target is making a smart move with toys despite lower margins because toys drive trips."

Such typical Wall Street nonsense! Yes, toys are not the greatest growth category and margins are pressured. However, the idea that Target (with its ideal demographic) doesn’t have an opportunity to mop up spend from Toys “R” Us is totally nonsensical. Especially so given the location of the stores, many of which are in old Toys “R” Us catchments. Some on the Street of Dreams need to get out more!

As Mark pointed out below, it’s a great way for Target to grab some traffic.

As for birth rates slowing down, hopefully Target is smart enough to flex its department size over the coming years …

Good move, and while margins may be lower than apparel and furniture, they’re certainly higher than groceries. THAT’s a move I never understood.

This is absolutely the right move. Target has demonstrated its understanding that their stores can not and will not be stagnant, but constantly move to accommodate changing consumer demands. This is certainly a power play and an announcement to the industry that Target is committed to going after all opportunities that arise and make sense. Tight margins on toys? Yep, but I doubt that those throngs of toy-driven customers will only stay in those toy aisles. These toy aisles at Target will draw additional customers. Enough said.

There is a certain expectation that a retailer like Target (or Walmart) should have a toy and baby category. If I am a Target shopper, I will probably take advantage of the expanded section. (Similarly if I am a Walmart shopper.) But it should be looked at as no more than a convenience to their customers. It is hard for me to believe that a new customer would make a special trip to Target to buy toys or baby products when all they have to do is go online. In fact, toys and baby products are perhaps the easiest products to buy online. Consider the question, why is there no more Toys “R” Us?

Target is making a smart move with toys despite lower margins because toys drive trips (think birthday parties) and shoppers love not having to go to yet another location! And toys deliver more margin than many grocery categories.

Don’t think about toys in a vacuum but as part of a very smart “headquarters” strategy by Target, extending to the Cat & Jack product line. In this context, “toys and baby” makes perfect sense.

I noted last week that the lead merchant at J.C. Penney discussed his company’s push into the same business — as though Target didn’t already have a big head start.

It is hard to argue with success. The demise of Toys “R” Us and Babies “R” Us created opportunities for retailers to fill the void of the the demand for these categories that didn’t go away. Parents with small children are a prime customer of Target and making their stores a one-stop shop with larger offering of toys and baby clothes has increased their basket size and revenues.

As consumer demand changes — driven by shifts in demographics, product preferences and competition — Target and other retailers need to adapt and change. Modifying store formats and product portfolios should be continually evolving to meet consumer demand.

So here’s a challenge. Ask any new mom what store was her 100 percent go-to the first 6 months to a year after baby was born. If a Target was remotely in her vicinity, you’ll get that answer. It may be anecdotal, but every woman I know considered Target the “one place to go” when she got out of the house as a new mom for many reasons –coffee, cushy plastic cart seats, a little delightful something to find and a great baby section. As the baby grew, the toy section was added onto the agenda as bribery to come along and play nice. This is a GREAT move.

I agree with Neil — it struck me as requiring some truly arcane divination on the part of investors to arrive at the conclusion that the children of the future will not want toys.

With parents already in Target buying other things I can’t see why the retailer wouldn’t try to snag the attention of those parents’ kids with improved/expanded toy aisles. I doubt it will become a toy connoisseur’s toy store like a specialty shop, but it will be a big draw for kids who are along for the ride.

Even prior to any announcements about expanded inventory, I’ve seen kids drop to the floor in the toy aisles of Target and refuse to leave/stop screaming until their parents bought them something. It’s hard to think of a stronger incentive for an impulse purchase.

My early thoughts during the Toys “R” Us closing was that this would be a good market for Target and Walmart to get more involved in. Now that Target has announced their success, I am wondering why we have not heard anything from Walmart. Both have the foot traffic to make this a good addition to their inventory.

It’s an excellent strategy by a well-operated retailer who knows how to mix/manage higher and lower margin categories. Toys “R” Us in particular is indeed low margin but can be an excellent driver of both penetration and dwell time, giving more opportunities to drive higher margin purchasing along with toys and baby items.

These are categories that align well with Target’s market positioning and should be a long-term strength for them going forward as they build loyalty and position themselves as more of a headquarters for the two categories.

The margin concern seems puzzling: certainly if a given foot of shelf space could be devoted to something that produced more profits it would make sense to do so, but what if that isn’t possible? Just because, say, diamond jewelry has higher margins, doesn’t mean Target should carry more of it — or that it should be carried in place of toys. Should a shelf sit empty waiting for the perfect category? And what about synergistic effects from shoppers coming in for toys but loading up on other, potentially high margin, items? I think in this case, barring some compelling evidence to the contrary, Target should be applauded, and the few naysayers ignored.

Braintrust
"Good move, and while margins may be lower than apparel and furniture they're certainly higher than groceries."

"It’s an excellent strategy by a well-operated retailer who knows how to mix/manage higher and lower margin categories."

"Target is making a smart move with toys despite lower margins because toys drive trips."