Will ending non-competes be good for retail workers and their bosses? 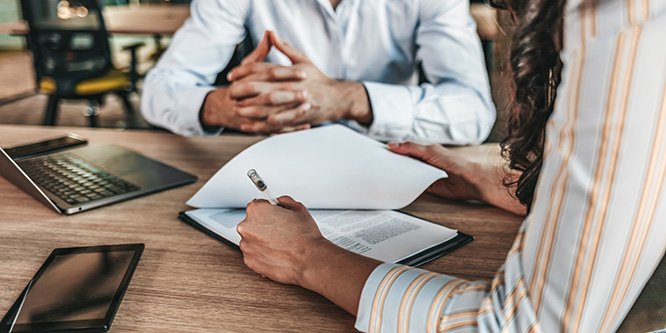 Businesses include non-compete clauses in their employment contracts to protect trade secrets, but the practice has come under fire in recent years for unfairly preventing employees from pursuing better opportunities and wages. President Joseph Biden, last week, delivered an executive order that seeks to restrict the future use of such clauses.

The order encourages federal agencies such as the Federal Trade Commission to ban or limit non-competes in an attempt to curtail the practice, which the Biden Administration estimates is affecting 35 to 60 million workers and stifling economic growth, The National Law Review reports. The Administration has not, however, released any information about specific moves it wants agencies to take. It will also potentially take a considerable amount of time for the order to yield results.

At the signing of the executive order, President Biden pointed to cases in which non-competes appeared excessive, such as when they prevent people running machines that lay down asphalt from moving to competing businesses. He also cited two quick-serve restaurant giants as going too far with non-competes.

“You can’t leave Burger King to go to McDonald’s,” said Mr. Biden. “Come on. Is there a trade secret about what’s inside that patty?”

In the last few years some states have taken smaller-scale actions against the proliferation of non-competes in contracts, especially those aimed at lower wage earners. Large corporations have lobbied on behalf of the restrictive agreements.

The Washington state Senate passed a bill in 2019 exempting workers who make below $100,000 from non-compete clauses, a number favored by Amazon.com, according to The Associated Press. The original ceiling wage written into the rule was $180,000. Amazon’s average employee salary is $113,000.

The state law passed the legislature and went into effect in January, 2020 according to the Tyson Law blog. The law further nullifies non-competes pertaining to independent contractors who make less than $250,000 per year.

Some states even have existing labor laws that render non-competes unenforceable. For instance, an item in a California business law voids any contract that restrains people from engaging in “a lawful profession, trade or business,” according to the Callahan & Blaine Law blog.

DISCUSSION QUESTIONS: Do you support the current use of non-compete clauses by retail employers or do you think there should be more limits? How will limiting employers’ ability to use non-competes at the Federal level affect retail industry employers and employees?

Please practice The RetailWire Golden Rule when submitting your comments.
Braintrust
"The arguments for curtailing the non-compete clauses are strong and valid. Workers should not be restricted from making a living. "

"There is a very fine line between protecting insider knowledge and preventing someone from finding a work environment that fits."

"At the end of the day, businesses win based on execution of strategy, but I believe non-competes have their place in companies."

17 Comments on "Will ending non-competes be good for retail workers and their bosses?"

Non-competes are the Catch-22 of employment. You can’t get a job without experience, but if you have experience you might not be able to use it.

For very senior executives a reasonable non-complete cause is standard and understandable. However the word reasonable is key – it should not be overly restrictive, for example preventing someone from earning a living in the same field for too long a period of time. For more junior workers, non-competes are broadly unnecessary in my opinion, although confidentiality clauses and agreements to keep trade secrets are sensible. It’s all about balance and employers need to remember that they do not “own” employees.

Yes, there should be limits on non-competes to executive or senior level employees – not front line workers. The arguments for curtailing the non-compete clauses are strong and valid. Workers should not be restricted from making a living. Furthermore, non-competes are extremely difficult to enforce.

Eliminating non-competes for lower wage, hourly, non-exempt, and non-management is a good start. Wage threshold is as objective as it gets and a good place to start.

The reality is that if there is a intellectual theft and the use of stolen intellectual property at a competitor, there are legal ways to encounter that. Non-competes will not make a difference in those scenarios.

In the vast majority of situations, non-competes are written in a way to stifle the employees – they can’t join the client, can’t join the competitor, can’t be in the same industry etc. — totally frivolous and in many cases malicious.

This is not a simple question. I think that stating that an ex-employee of Company A cannot accept employment at Company B is like restraint of trade. An employee has a right to earn a living and s/he has a better chance if s/he has worked in a similar business before. As hard as it is to prove, the restriction might be on divulging trade secrets, such as chemical formulations or unique software developments.

There is a very fine line between protecting insider knowledge and preventing someone from finding a work environment that fits. And if fast food restaurants think their secret sauce recipe isn’t already all over the internet they are mistaken. I do agree that some protections and assurances need to be agreed upon between employer/employees, but more care needs to be taken to protect the worker’s ability to move on to a better job. At the end of the day, if a company treats their employees well and pays a living wage, the need for non-competes becomes vastly reduced.

I think the approach taken by the State of Washington is very sensible. Lower waged people probably have less access to critical trade secrets and their restrictions on employment should be minimal, but if anyone at any level could take trade secrets to the competitor, then developing business strategy (or competitive strategy) in the first place ceases to be very useful. Imagine hiring one executive from a competitor every nine months or so in order to learn what your competition was going to do during the next one to three years; or likewise, knowing that one of your executives would be poached every year – thereby losing an edge on major programs or campaigns. That would severely affect the capitalist system.

At the end of the day, businesses win based on execution of strategy, but I believe non-competes have their place in companies. And companies are effectively paying for the non-compete restriction based on salaries and bonuses offered.

Trade secrets should be protected and the laws enforced for appropriate punishments. Non-competes are a blanket solution to an isolated problem.

There is a place for non-compete clauses — but a very limited place. The problem is that too many employers have used a strong-arm approach to implementing them when hiring someone. I’ve seen people leave a company (in most cases because they were working for bad bosses) who were blocked from working within their sector for too long.
If you’re at the top, then there may be a good argument to be made for them. But that’s about 1 percent of most companies. The other 99 percent (who do the hard work and build the brand every day) deserve the freedom to work for whomever they want.

There are states where non-competes are simply not legal and they’re really easy to break as well. People have said they signed them under duress.

So yes, ending them will end a pretty useless thing.

It’s arguable that a limited use of non-competes (say, for a senior executive going from one direct competitor to another, like PetSmart to Petco) makes sense. But the practice has been abused in recent years and deserves to be curtailed.

Yes, non-compete laws should be looked at and evaluated but not eliminated. Where a company has invested a great deal of training and time in the development of an employee or has entrusted that employee with competitive information that can damage them if they go to work for a competitor, they should stop that from happening within reason.

For example, a hairdresser who has worked in a shop and been trained and helped to build a clientele should not be able to compete with the shop they leave for a period of time, for example, one year by not going to work for a competitor within 5 miles of the shop for 1 year. If they want to go anyplace else to work, they can do that.

There can be a much better approach to enforcing non-compete — by using a carrot instead of a stick. For example, one company I know pays their senior employees x months of salary in lieu of not joining a competitor within x months of leaving.

Ending non competes where they clearly do not really apply will be good for everyone but the labor lawyers. So all in all, a really good thing indeed.

These agreements are already illegal in many states anyway.

Perhaps the non-competes should only be legal for people making over a certain wage. And I am thinking a pretty high wage — like $250k a year.

With only a few exceptions, non-compete agreements should be outlawed as they are not “agreements,” but a one-sided imposition of employer power.

The exceptions are important, however, for associates in highly strategic areas such as R&D, new product development, cyber security, and corporate strategy.

For many of those folks, non-disclosure agreements may suffice instead. For others, non-competes may be justifiable, but exclusivity must have a price. It should be part of an employment contract that protects the employee and have reasonable time limits.

I’d venture that 99% of retail workers should never be asked to sign a non-compete clause in exchange for their jobs. Any retail employer that wants to attract and keep the best associates should avoid them.

The use of non-compete clauses is restrictive, unenforceable in most cases, and uncapitalistic. The free market economy depends on a free market which can respond to the unrestrained forces that free labor are an essential part of. Restricting these in any way restricts our capitalistic, free-market economy

Braintrust
"The arguments for curtailing the non-compete clauses are strong and valid. Workers should not be restricted from making a living. "

"There is a very fine line between protecting insider knowledge and preventing someone from finding a work environment that fits."

"At the end of the day, businesses win based on execution of strategy, but I believe non-competes have their place in companies."