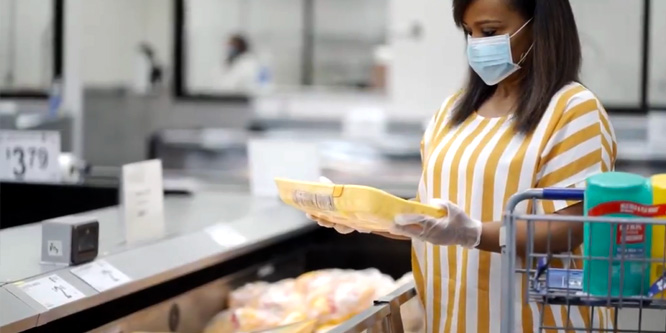 Sam’s Club is thinking smaller this holiday season. The number two warehouse club is selling smaller-sized hams and side dishes this year to better accommodate shrinking Thanksgiving and Christmas celebrations due to the novel coronavirus pandemic.

The division of Walmart began reducing the size of some of the products it sells as it became apparent that club-sized items, in some cases, were simply too large for many members as family members and friends were kept apart as a result Americans were asked to stay home and socially distance when they went out.

Megan Crozier, Sam’s chief merchandising officer, told CNBC that it reduced the size of items such as brownie packs and cake mixes as the virus spread across the U.S. Sales of these items were strong and Sam’s broadened the approach to its holiday ham selection, which will come in four, seven and 10-pound sizes this year. The retailer is also selling side dishes for a family of four with greens beans and garlic herb butter, mac and cheese and sweet potato mash with cinnamon butter.

In going to smaller packs, Sam’s is employing a strategy that BJ’s Wholesale Club, its smaller rival, has used for years. That chain made the decision more than a decade ago that its best opportunity for market share growth was to focus on competing with local supermarkets.

The chain has responded by rolling out online shopping with curbside pickup programs at all of its 597 locations. Sam’s is putting a greater emphasis on in-club fulfillment of online orders with 100 locations designated to pick and ship purchases made by members. The retailer is looking to meet an expected increase in online orders, adding 2,000 more full-time fulfillment and distribution center associates to its payroll.

Sam’s, like others in retail, began rolling out holiday deals near the beginning of October. Management says it plans to offer more deals and new products this season spread out between now and Christmas. Its annual Thanks-Savings promotion will last 10 days this year compared to four in the past. Sam’s December Savings Event has gone from one day to 10 days this year.

DISCUSSION QUESTIONS: Will Sam’s Club have success selling smaller food pack sizes for the holiday season? Do you expect the company to expand the initiative going forward, and what effect do you think this would have on its ability to attract non-business members to its clubs?

Please practice The RetailWire Golden Rule when submitting your comments.
Braintrust
"Combined with ship-from-store efforts and contactless shopping, Sam's Club is really setting itself up for success this holiday season."

"While downsizing food packs is certainly appropriate for this season, it’s the whole package that Sam’s is putting into place that will make their season a success."

"It’s a fair bet that large family gatherings will be much rarer this Thanksgiving and Christmas, so stocking smaller proteins is a smart play for most food retailers."

13 Comments on "Will downsizing (food packs) bring a merry Christmas to Sam’s Club?"

This is a smart adaptation in a year when the virus will disrupt travel and holiday get-togethers. Other retailers, including Giant Eagle and Stew Leonard’s are buying higher numbers of smaller turkeys than they usually would in response to the trend. It is all rather depressing to think that so many great holiday traditions and family occasions will be off-limits this year, but it is good that retailers are alert to this and are making adjustments accordingly.

This is a simple and smart response to market conditions. It’s clear that group sizes are smaller due to COVID-19, and adjusting food pack sizes to accommodate this only make sense. Going forward I expect Sam’s Club to continue to listen to customers and make adjustments that meet new needs. And while these product tactics are sensible, I doubt that it will have any significant impact in attracting new members.

Selling products in smaller sizes will make its offerings more appealing for smaller families or couples without kids. The size of many bulk items has deterred some people from joining warehouse clubs in the past. The new smaller sized offering is a way to attract new members. Promoting the new offerings to non-members and maybe offering them a one-day trial membership should help grow their membership and sales.

Yes, I think this is a smart move and will result in more products being moved. There is less concern about waste, a higher likelihood of impulse buys as a result, and a more satisfied shopper. I do not know that we will see Sam’s Club fall into line with BJ’s and make this a permanent change but it seems like a smart play until things can revert to being open for larger gatherings at these times of year. Expanding the savings event times should also equate to better numbers. As they expand their online shopping/curbside pickups, I would like to see one of these warehouse sellers find a better way to allow for shopper satisfaction with food quality. It could be something as simple as sharing an established “standard” for produce to be acceptable to a more advanced utilization of technology to allow for the picker to interact with the shopper and get a thumbs up. Whichever brand can do something like this the fastest (be it warehouse or traditional grocery) will see a… Read more »
1
|
0
-   Share

While downsizing food packs is certainly appropriate for this season, it’s the whole package that Sam’s is putting into place that will make their season a success. By gearing up for more BOPIS, curbside and home delivery activity plus the sizing initiative, they will be in a good place to meet the increase in demand online and fulfill its customer’s requirements. People are not only looking at smaller gatherings this season they are also looking at tighter budgets as many are out of work and more still concerned for the future so spending will be watched very carefully. As you would expect, Sam’s preparation are on track and right in line with what they should be looking at. How quickly they are able to put this into operation and get product through the supply chain is a different matter. Packaging and manufacturing changes are all more complex than they seem when you are making a major shift like this. However spreading the demand over a longer period and bringing forward product will meet customer demand… Read more »
1
|
0
-   Share

This is an apt strategy given the current situation but once a vaccine is rolled out, I anticipate larger gatherings and an increased demand for larger food pack sizes.

Smart, efficient, and pragmatic. Smaller and fewer family gatherings means abbreviated shopping lists. I’d be happy with the extra leftovers, but for many people this makes abundant sense.

Sam’s Club will absolutely have success selling smaller food packs this holiday season. In general, having smaller packs would help expand non-business membership. During the pandemic, I’m not so sure if membership would expand, but they will definitely be able to better meet the needs of current members. Combined with ship-from-store efforts and contactless shopping, Sam’s Club is really setting itself up for success this holiday season.

Smaller food pack sizes makes sense beyond the holidays and beyond the pandemic. BJ’s has shown this will work. Plus the growth in the senior and empty-nester populations makes smaller food pack sizes a natural. The club stores have always positioned themselves as the value destination. Prices are indeed good, but demand a larger cash outlay at the time of purchase as well as the need for product storage. Smaller pack sizes beyond prepared foods makes sense. In fact, it is an opportunity to offer an aisle of smaller package sizes, comparable to what many traditional food retailers have done in offering an aisle of larger (club store) size packages. Club stores will still be valued for the “treasure hunt.” Now the hunt can include smaller pack sizes.

I do think this is a good move for Sam’s Club. As an empty-nester myself the barrier for me to shop at warehouse stores is pack size. I think they can certainly pick their spots, high turn, perishable SKUs, and grab and go meals. I think they’ll be successful enough — especially in markets that skew toward older households — that they’ll continue this after the holidays.

It’s a fair bet that large family gatherings will be much rarer this Thanksgiving and Christmas, so stocking smaller proteins is a smart play for most food retailers. For club stores like Sam’s Club, this means adjusting the range of sizes they would normally carry. This in turn depends on the product available from the growers, who by now have most of those birds and hams on ice and spoken for, awaiting shipment.

If some shoppers wind up frustrated because they could not find the right sized product in their regular supermarket, they might be curious to try Sam’s Club as an alternative. The broad promotional push just announced will get the word out.

Correspondingly smaller packs of produce items like potatoes, green beans and fresh fruit would help cinch the deal in the minds of new shoppers, I think.

In a year highlighted by Covid, high unemployment, an economic depression, and an aggressive electoral environment, this makes sense. Smaller packs cost less, so that members can purchase more items, and hopefully spend more.

Braintrust
"Combined with ship-from-store efforts and contactless shopping, Sam's Club is really setting itself up for success this holiday season."

"While downsizing food packs is certainly appropriate for this season, it’s the whole package that Sam’s is putting into place that will make their season a success."

"It’s a fair bet that large family gatherings will be much rarer this Thanksgiving and Christmas, so stocking smaller proteins is a smart play for most food retailers."