Will doctors prove a cure-all for Walgreens competitive ills? 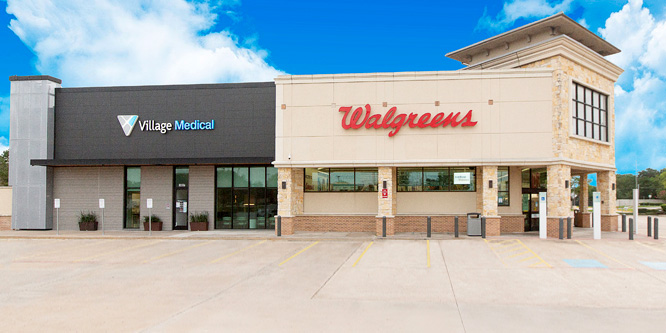 The doctor is in at Walgreens, or at least he/she soon will be. The pharmacy chain announced yesterday that it has reached an agreement with VillageMD to locate between 500 and 700 primary care doctor’s offices in its stores over the next five years.

Walgreens and VillageMD are looking to place physician-led clinics at the drugstore chain’s locations in 30 markets with plans to “build hundreds more” after meeting the original targeted number. The clinics, known as “Village Medical at Walgreens”, will have footprints of between 3,300- and 9,000-square-feet, depending on the location.

The deal expands upon a successful five-store pilot program between the two companies in Houston last year. The test clinics earned net promoter scores of 90. Walgreens also announced that it has made an immediate $250 million equity investment in VillageMD that will grow to $1 billion over three years.

The primary care concept provides the drugstore chain with a clear point of difference from its main rival, CVS MinuteClinic, which runs in-store clinics with nurse practitioners at more than 1,100 locations.

Walmart is also putting an increased focus on customer care, locating Walmart Health clinics next to one of its stores in Arkansas and three others in Georgia. The clinics, which also employ physicians, provide low-cost primary care service as well as dental, optical and lab services.

Walgreens said that its pharmacists will be integrated as important members of “multi-disciplinary” teams focused on providing superior health care to patients. The clinics accept a variety of health insurance plans and offer around-the-clock care with telehealth and in-home visits in addition to care provided in stores.

Tim Barry, chairman and CEO of VillageMD, said that 85 percent of the $4 trillion spent annually on healthcare in the U.S. is tied to the treatment of patients with chronic diseases.

“This partnership allows us to unleash the power of primary care doctors and pharmacists, enabling them to work in a coordinated way to enhance the patient experience,” he said. “The results of our initial pilot clinics highlight that these outcomes are infinitely achievable.”

DISCUSSION QUESTIONS: How much of an effect will the widespread launch of the Village Medical at Walgreens concept have on the drugstore retailer’s business? How do you anticipate rivals from CVS to Walmart to respond?

Please practice The RetailWire Golden Rule when submitting your comments.
Braintrust
"Not only is this a win for Walgreens, it’s also a win for the communities these stores serve. "

"It appears the Walgreens test read says doctors in the store clinic are the key that unlocks patient trust and cash flow."

"I’m not sure that the physician v. nurse practitioner distinction is as competitively meaningful as Walgreens may think."

20 Comments on "Will doctors prove a cure-all for Walgreens competitive ills?"

There has been a growing movement to re-positon health care services closer to the people who need them, and drug stores and general merchandise retailers are well suited to deliver. Expanding health services is a smart move by Walgreens to remain competitive, but I don’t see this having a significant impact on the competitive landscape.

I think this is very useful for consumers, a significant step in reducing stress on health care system and a win for Walgreens. Twenty years ago, when I was new to the U.S., it was either the ER or wait for a doctor appointment that was two or three days out. Where I came from in India, one of the defining features of health care was immediate accessibility to primary health care, at least in metro areas. That lack of accessibility in the U.S. was jarring.

Over the years, urgent care clinics popped up. Followed by walk-in clinics. Now this is one more significant addition. Only when multi-layered infrastructure is made available will emergency rooms be able to serve true emergencies.

It makes sense to position health services next to pharmacies – it is a natural extension of what they do now and it also puts them in step to compete with Walmart clinics in the future, but it will be a while before we really see the effect of this and its usage by customers.

I like the idea – it may make health care more affordable and accessible. I’m not sure that the physician v. nurse practitioner distinction is as competitively meaningful as Walgreens may think. At least here in Georgia, the nurse practitioner idea is growing and is widely accepted.

This is the first full-on attempt at making drug outlets full service health care outlets. While nurse practitioners can probably handle the majority of in-store clinic patients needs, the perception that “they don’t have a doctor” has held current drug efforts back. It appears the Walgreens test read says doctors in the store clinic are the key that unlocks patient trust and cash flow. I think they are probably right.

There has been a need to redirect medical schools to create more general MDs rather than specialized practitioners, as small towns and rural areas just can’t support them, and even in metro areas there isn’t the coordination of care by a generalist that could reduce unnecessary tests and procedures. Plus, in these times, the fewer people a patient needs to see the lower the chance of picking up the virus. Let’s hope this effort bolsters the re-emergence of the “family doctor”!

This is a great evolutionary move. If the brand promise is health and wellness, then this move heightens that profile.

Ever hear of LensCrafters? Same deal. And working well for over three decades. The only difference is, we already perceive Walgreens as one thing, and that would be a quasi-convenience store with prescription refills and potato chips to boot. So to me, this is going to take some sticktoitiveness from the Walgreens board — and that’s not exactly their M.O. Given all that’s happened in the last four months, it’s possible that they have changed. So let’s see if this good idea can tread water over the next couple of years because, if it does, I think they’ve got something here.

Is this a good move? Yes. Is it innovative and pioneering? No, not particularly. Walgreens has a lot more work to do in becoming a destination for health and wellness over and above its prescription and standard health business. Adding doctor offices to some existing stores will help marginally, but to get superior growth the group needs to rebuild its core proposition. Too many stores look sickly, the retail offer is weak, and it hasn’t built enough credibility in non-doctor wellness services. Now that the international division is in free fall, the U.S. business is key to future prospects. Time to invest and innovate!

A doctor’s office needs space, more than a sole-practitioner walk-in clinic. If Walgreens locates these office adjacent to their stores, it makes sense. If they try to shoehorn these practices into their existing (already crowded) stores, not so much.

Not only is this a win for Walgreens, it’s also a win for the communities these stores serve. particularly in areas with few doctors. Two big thumbs up.

Walgreens stores are sad places to shop. While displays and merchandise assortments are fine, those who work at Walgreens reflect a robotic sadness including the pharmacy personnel. Shoppers are few. Visiting Walgreens for health care services does not inspire medical confidence. Commoditizing health care as a retail/retailer service reflects a robotic approach to human health care.

I love it when retailers invest in adjacent business categories that make their stores more relevant to consumers. And while I don’t believe this will be a cure-all for what ails Walgreens, I do think it is a smart move that will work out well for them and for the people near these stores who will now have more access to primary health care.

I like this idea. Let’s just hope Walgreens vets this partnership better than they did the one with Theranos.

I doubt this is a “cure-all” for Walgreens. The other guys can do the same thing — and they should. It makes strategic sense.

But “cure-all” or not, it is one step to people getting better, more consistent, less expensive health care.

Walgreens’ move to bake primary care into the pharmacy experience could help the company turbocharge its healthcare branding and care footprint vis-a-vis Walmart (with its new health centers, opening one at a time) and CVS/Aetna’s Health Hub Concept. VillageMD’s competency in population health management is also part of the secret in this sauce: if well digitally integrated with Walgreens’ systems, the chain can be a real player in “healthcare” beyond the pharmacy and retail health modes. It’s all about the data, and this could expand Walgreens’ role in a significant way. Now, it’s about execution. Hopeful this can work to help bring primary care to peoples’ neighborhoods, where we live, work, play, learn, and … shop….

Love this move. It’s not just the added revenue stream, but one that brings in visitors during off-peak hours. It’s the perfect complement to what Walgreens already does well.

It appears they will downsize the Walgreens store and this will operate like an adjacent/separate tenant space. This may be more of an admission that the Walgreens store format is failing than anything else. And if this fails they can try to sublease the excess space out for some other use.

Walgreens already largely failed with their in-store clinics (the “Take Care” Clinics) with the NP staffing many of which were closed in recent years. We will see if this works. I don’t think it will work in as many locations as they think it will work. Especially as Coronavirus has pushed us toward Telehealth services and similar when possible, the basic services you would go to this type of place for are just what could be handled via Telehealth.

Making healthcare affordable, convenient and integrated with pharmacy services can close a big gap for many. Walgreens will need to refresh its stores and merchandise to make the experience positive for consumers.

Braintrust
"Not only is this a win for Walgreens, it’s also a win for the communities these stores serve. "

"It appears the Walgreens test read says doctors in the store clinic are the key that unlocks patient trust and cash flow."

"I’m not sure that the physician v. nurse practitioner distinction is as competitively meaningful as Walgreens may think."