Will diversity pledges be followed by results? 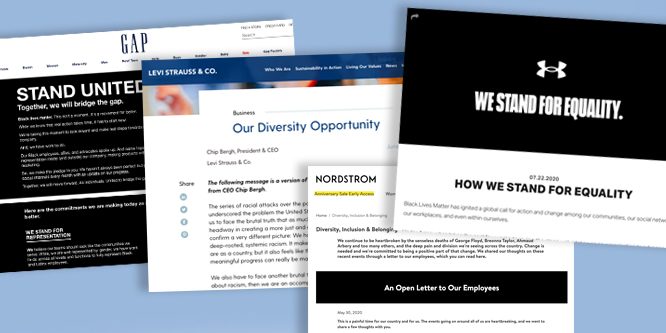 A number of retailers and brands made diversity pledges when the #MeToo movement gained momentum in 2017 and recently they’ve upgraded and amplified those commitments in the wake of the Black Lives Matter protests.

The pledges often came along with substantial donations to Black causes, as well as commitments to education and career development programs for minorities, unconscious bias training for all employees and inclusion workshops. Many organizations are promising to listen better to the concerns of underrepresented employee groups.

John Donahoe, Nike’s CEO since the year’s start, said in an employee memo in mid-June, “As I have listened deeply during my first six months and over the past few weeks, what I have learned is that many have felt a disconnect between our external brand and your internal experience. You have told me that we have not consistently supported, recognized and celebrated our own Black teammates in a manner they deserve. This needs to change.”

The New York Times reported on a movement to tie executive pay to fulfilling diversity goals.

The reset commitments around diversity come as women in recent years have made progress improving executive and board representation, while racial diversity remains a challenge.

DISCUSSION QUESTIONS: Do you think making racial diversity progress will be easier or harder than achieving gender goals? What price, if any, do you think organizations will pay if they fall short of their pledges?

Please practice The RetailWire Golden Rule when submitting your comments.
Braintrust
"Each of these companies made specific public goals that they will need to complete — if they don’t they stand to receive backlash from employees, media and consumers."

"As the world turns to surviving a global pandemic, many may not remember the pledges made by companies to address racial diversity without some sort of catalyst."

"These pledges address the superficial symptoms of discriminatory practice, but not the disease of systemic and institutionalized racism, sexism, or gender identity bias."

15 Comments on "Will diversity pledges be followed by results?"

Well that’s the thing, isn’t it? You can say whatever you want in the heat of things but it’s the follow up that really matters. Each of these companies made specific public goals that they will need to complete — if they don’t they stand to receive backlash from employees, media and consumers.

The big question is whether they will be forthcoming or if the media will deem it important enough to follow up to see how companies are progressing. The article mentions corporate commitment to women and their inclusion in executive and board representation. I’m optimistic but how many years have we been talking about that?

You are right – it has taken decades for women to be included in executive and board representation and I suspect these new goals will also take time to gain traction as well. I hope these companies are transparent in their progress in reaching their goals.

Businesses can successfully address systemic racial and gender discrimination on the job by edict. However, gender and racial bias is a different story. Bias is not something that a business entity can eradicate. Individuals have to eliminate their own bias. I don’t think that a business, unlike public service organizations, has a moral obligation to provide sensitivity training to those who bring their bias to work. They can fire for cause but they won’t change the guilty. To pledge to hire more diversely is a noble goal. Diversity, too, has to be fair. More deserving women and minorities should be hired and promoted but it would not be constructive to place incompetent people in positions of influence and authority simply because they are female or a member of a minority just to be able to say: “see, we diversify.”

These pledges have been the most ridiculous and insincere messaging to come from corporate America in a long while. They were only driven by blatant public outrage and the internal need for corporations to put spin on their own shortcomings when the spotlight got bright.

What–before the #MeToo movement and George Floyd/BLM protests, these companies didn’t notice sexism/glass ceiling/racism/lack of diversity in their ranks? They absolutely did and chose not to act on improving it in a meaningful manner.

Now that there is such public discourse, many have felt a need to use PR statements and change some policies so as to not leave their brand in the dark and vulnerable. That’s not sincerity. That’s not caring. That’s not moral responsibility. It’s reactivity in the marketplace ELSE, this would have been addressed decades ago.

And as I said here yesterday:

Two, I am hopeful that Gen Z will indeed keep these companies accountable and not let them off the hook. They are certainly paying close attention, and not just to gender or race, but to all kinds of diversity. They are the most diverse generation in the U.S. – and they know it, too. That’s not to let other generations off the hook, but it’s Gen Z dollars that companies will be courting the hardest in the near future, so their perspective carries more weight.

I am with you Nikki because this is more than hitting numbers in corporate seats. I would go out on a limb to say that many who are fighting for racial/gender equality, etc may not even be in the chairs or qualified for these jobs. I don’t know the statistics so this is a guess. This issue is much much bigger than equality in the boardroom. Just saying. For my 2 cents.

Follow-through on these pledges will yield obvious benefits, making companies more in tune with their customer bases. Some of us remember when foreign-born white men dictated women’s fashion choices — those days seem positively quaint.

There is an ebb and flow to social change. But net-net in history, the social change has been positive. In this case, the companies’ pledges may not be fully realized, but there will be scrutiny of their progress. And once they start, it will continue.

Sadly it isn’t about turning a faucet on or off, but the dripping that makes the permanent change. In America we are not there yet, but despite the feeling that a large part of the country is fighting the progress, quite hard, they are not stopping it.

A brand is all about keeping the expectations and commitments that it makes to the public. Not doing so dilutes the brand. You can’t just stand for something when it’s convenient or opportune. So not maintaining those diversity promises will in the end cost reputation, sales and profits.

This is an amazingly complex question and one that I think is poorly framed. These pledges address the superficial symptoms of discriminatory practice, but not the disease of systemic and institutionalized racism, sexism, or gender identity bias. What is being proposed is a 21st century version of the old affirmative action programs. Both versions confuse quantitative and/or proportionate representation with actual equity, equality, and inclusion. What the experience of affirmative action should have taught us is that social justice can be a matter of one small step forward, two large steps back. By setting quotas, a corporation is saying that the most important thing is checking off the boxes, not fully recognizing candidates of color/gender as fully qualified. The result is that many employees may get a certain job but still feel they can’t, “bring their whole selves to work,” i.e., they can have the job, as long as they conform to white patriarchal, paternalistic, corporate values and standards. Yes, qualified “minority” applicants get hired and promoted at a higher rate than they may have… Read more »
1
|
0
-   Share

When we talk about gender goals, it’s about equivalizing the balance between men and women–generally speaking, to add more women. When we speak about racial and diversity goals, it’s about adding more men and women–generally speaking, to add more people of color. It’s likely not a stretch to see that more advancements have already been made with adding more women than people of color. The thing is, you can add more women, and still not hit a single racial diversity goal. This is where bias plays a heavy role, especially in hiring practices and internal promotions. We like to call it unconscious bias, but it’s not really. People are biased. Full stop. As the world turns to surviving a global pandemic, many may not remember the pledges made by companies to address racial diversity without some sort of catalyst. For example, will consumers remember to check their calendars in 2025 to see how Gap delivered on their goals? Probably not. However, employees and industry professionals can and should hold corporations accountable for these pledges; not… Read more »
1
|
-1
-   Share

Outside of retail, my employer, IBM, has taken a stance on diversity for literally over 100 years, including over 50 years in supplier diversity, and has long-term impacts to show for it. Talk is cheap, but a legacy of outcomes says a lot more.

Racial diversity and gender goals are usually tightly coupled and managed in similar ways. Companies have typically hired in concert. The real problem is that during the pandemic, hiring itself has been stifled, and in many cases, it’s really about layoffs and furloughs.

There will be no substantial price for not meeting their goals from the public — unless there is a breakdown in their PR. All of the pledges serve to enhance diversity and even if unmet, companies will be furthering diversity in their organizations by simply acknowledging it and striving towards it. The pandemic and in some cases the ambiguity of the goals will be sufficient to avoid any real backlash.

I’m highly interested in campaigns like #pulluporshutup that are calling for massive boycotts of brands whose actions don’t align with their media. Brands like Adidas are undergoing a massive overhaul to create a corporate structure that reflects their messaging. As long as consumers keep calling for boycotts of brands that aren’t supporting black lives with their actions, brands will be forced to continue moving towards a more diverse workforce.

Wait … so change is actually harder than putting an ad in the NYT? There are a multitude of reasons both legitimate and not-so-legitimate as to why companies have hired who they have, and attempting to change that by fiat — be it internal or external — doesn’t sound like an idea that’s going to work very well.

But in answer to the actual question asked: there are only two genders — well, sort of anyway — but an infinite number of races … it’s hard to picture dealing with infinite not being harder than dealing with two. The penalty if they fail will be more ads … maybe two-page ones next time !

Braintrust
"Each of these companies made specific public goals that they will need to complete — if they don’t they stand to receive backlash from employees, media and consumers."

"As the world turns to surviving a global pandemic, many may not remember the pledges made by companies to address racial diversity without some sort of catalyst."

"These pledges address the superficial symptoms of discriminatory practice, but not the disease of systemic and institutionalized racism, sexism, or gender identity bias."