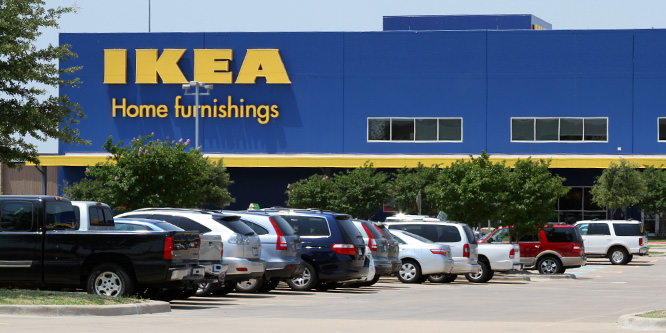 It’s no secret that a large percentage of orders placed online are being picked up by customers in stores. For IKEA, the combination of online ordering and in-store pickup is central to the international furniture chain’s growth prospects.

Yesterday, IKEA reported that it had opened 19 pickup locations for online orders and 12 traditional warehouse stores over the past year. A company press release said this reflects IKEA’s increasing “focus on integrating physical and digital commerce to enable customers to shop in ways that suits their needs.”

According to The Wall Street Journal, IKEA’s click and collect centers typically average about 20,000-square-feet compared to its massive warehouse stores. The 19 locations opened over the past year represent a sizeable jump from three opened the previous year.

CEO Peter Agnefjäll called the initiative “part of the total conversion of IKEA from a traditional brick-and-mortar retailer to a multichannel retailer with the stores at the heart.”

Whatever IKEA is doing, it appears to be working. Total sales for the flat-pack furniture giant were up 7.1 percent over the last year. Same-store sales improved 4.8 percent.

DISCUSSION QUESTIONS: How do you see click and collect transforming IKEA’s business model? What are the likely results from this effort? What other retailers could benefit from a similar approach?

Please practice The RetailWire Golden Rule when submitting your comments.
Braintrust
"I think that this offering coupled with the work they are doing in augmented reality is a winning solution."

"If I want it now, I can order online and run by to pick up without having to go through the whole store. Or at least I hope that’s how it works."

17 Comments on "Will click and collect conversion transform IKEA’s business?"

Click and collect puts emphasis on IKEA’s website. The site needs to be kept current, easy to search and simple to check out while providing customers with all of the information necessary to cause a purchase. Few retailers are doing all aspects of e-commerce well. What IKEA is losing with click and collect is consumers wandering through its stores on their infamous mouse track, making impromptu purchasing decisions for items they didn’t know they needed.

I agree with you Max, but what they are gaining are the people who find going through the mouse track a waste of time and an annoyance.

IKEA is tapping the internet mouse track with their click-and-collect. The click-and-collect model eliminates potential for cart abandonment, instead banking on the excitement of the immediate reward. Online shopping with no waiting period.

I see this as a major benefit to IKEA for prosumer and even pro-customer segments. IKEA has done well with its assembly services, but these are available only with delivery services. With its complete kitchen and bath solutions, I see these pickup locations as time-saving and ideal for pros who are remodeling apartment buildings for example. Their construction teams can pick up the goods on their way to a job and then complete the kitchens, baths, etc. during the workday.

I see this as a major benefit to IKEA for prosumer and even pro-customer segments. IKEA has done well with its assembly services, but these are available only with delivery services. With its complete kitchen and bath solutions, I see these pickup locations as time-saving and ideal for pros who are remodeling apartment buildings for example. Their construction teams can pick up the goods on their way to a job and then complete the kitchens, baths, etc. during the workday.

While click-and-collect is a de facto concept going forward for many retail businesses, IKEA is now increasing its operating costs by opening just pickup locations. It is possible that IKEA wants to expand its pickup (“collect”) capability to provide more presence where it may have customers but no stores. The risk of being so accessible is that it erodes a portion of operating profits. Retailers are always walking a fine line.

Click-and-collect is a great model for retailers at which it can be very difficult to shop, and IKEA is at the top of the list. Huge parking lots, crowded stores and byzantine walking patterns make shopping at IKEA a daunting adventure. Click-and-collect will be a great solution for shoppers who know what they want.

Other big-box retailers with high traffic and challenging parking situations are great candidates for click-and-collect. Costco and Walmart should be successful with this model as well.

Smart move by IKEA and safe to do with sales up 4.8 percent. This expands the Millennial web-based shopping addicts who have little time for anything except online shopping. It is a continued shift from the tradition of IKEA. Change like this is good — if you can maintain the foundational channels as they do.

The click-and-collect process is a natural fit for IKEA. It complements their “buy and build” product line. IKEA invests a lot of resources into their product and scenario photography so customers can see what those pieces and parts actually look like when assembled. The click-and-collect process also makes sure that the items that shoppers want are in-stock and available. My first experience with IKEA here in the U.S. was pre-Internet on the East coast. I was remodeling my kitchen in Connecticut and we drove down to the IKEA in New Jersey with a trailer. They didn’t have all the cabinets in-stock and I had to go back weeks later hoping they’d be in-stock. Click-and-collect would have been an amazing and welcome service. More retailers need to sync their channels to support this initiative. Imagery, website, supply chain, e-commerce and in-store all working seamlessly for the shopper’s benefit — what a concept!

Click-and-collect is a natural addition to the business model. It provides a fast and easy alternative to buy IKEA. It is great for contractors and DIYers. It even works well for that fill-in item that one didn’t think they need with their original project.

I think that this offering coupled with the work they are doing in augmented reality is a winning solution.

I have to admit that when they opened IKEA in Atlanta I was pretty excited until I went there. It was a day-long affair just to navigate the store. I rarely go there anymore for that very reason. It just isn’t convenient.

So this concept is definitely a winner for me. If I want it now, I can order online and run by to pick up without having to go through the whole store. Or at least I hope that’s how it works. The article doesn’t say where I pick up.

The click-and-collect model is accelerating for most every retail concept as they adopt new processes to accommodate consumers’ desire for convenience and flexible fulfillment services. The new, smaller-format IKEA click-and-collect centers are a great way to extend IKEA’s business to more remote locations that can’t support a full-sized mega store. While picking-up products at the click-and-collect stores, shoppers will also be compelled to purchase a few other staple IKEA products they use on a regular basis and even some impulse purchase. Having shopped the store many times I believe this is a perfect extension of the experience. You can’t go every day as the stores are few and far between. This click-and-collect option allows for visiting the store, reflecting on the options and then picking up at a later date with the right vehicle, the right labor to help load, etc. This makes perfect sense for the model.

As omnichannel fulfillment options continue to evolve, savvy retailers are responding by giving customers what they want — ultimate convenience!

Yes, but those “massive” warehouse stores are massive for a reason … they’re filled with inventory. These pick-up spots have to be serviced from somewhere, so I’m not sure how transformational this will really be, absent an expansion of backroom (i.e. warehouse) space. OTOH, this will hopefully obviate the need to visit an actual IKEA and fight your way thru the mass of humanity one finds there.

I’m hesitant to say how applicable this will be to other companies. IKEA has always had a singular business model — they’re the archetypical big box/limited location seller — so in a curious way this is making them more like other retailers … perhaps as they add locations — albeit mini ones — and other stores pare back, they will approach parity.

This is a really interesting move on IKEA’s part. Rather than going all in on the warehouse model that we all know and love, they’re acknowledging the momentum that pure play retailers like Wayfair have generated. All while trying to integrate the digital and physical experience. This is in contrast with the more typical brick and mortar strategy, which is to clumsily append in-store pickup to stores designed for shopping. If executed well, this could be the model for omnichannel in the future.

While this is a great option for shoppers and no doubt will help IKEA, it would be interesting to see how much of the sales and same-store sales increase is from click and collect. I see click and collect being used for smaller items/accessories, or things you’ve already seen in the show rooms at a previous time.

In 2015, ICSC found that 69% of customers who came in-store to collect their items, purchased more items. Already IKEA is announcing the 4.8% increase in same-store sales. It will be interesting to see how high that number will rise during the 2016 holiday season. Omnichannel is definitely the way to go!

This decision goes against IKEA’s DNA. The company has had a conflicted omnichannel strategy for years. First, it waited far too long to even offer e-commerce because it preferred customers to push their carts through a maze of departments. It then began to offer offering ship-to-home on selected items with prohibitive shipping costs, and now it wants to join the click & collect wave. This has the feel of promoting the “don’t come to my stores anymore” syndrome. It feels like IKEA follows the wave, but either too late or driven by an unclear vision of how their customers have evolved.

Braintrust
"I think that this offering coupled with the work they are doing in augmented reality is a winning solution."

"If I want it now, I can order online and run by to pick up without having to go through the whole store. Or at least I hope that’s how it works."