Will breakfast at Tiffany’s attract Millennials in search of ‘Instagrammable’ experiences? 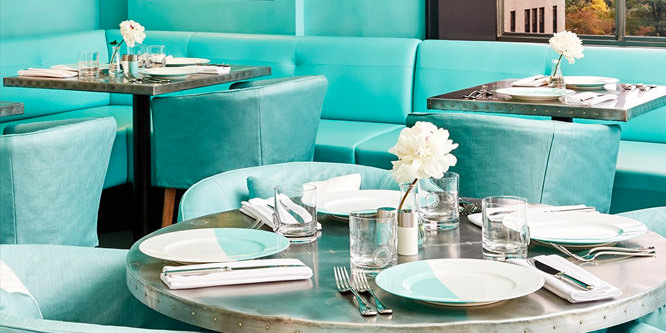 For the first time since the famed movie that launched Audrey Hepburn’s career arrived in 1961, Tiffany & Co. will be serving breakfast at its Fifth Avenue flagship.

The high-end jeweler has renovated the home and accessories section on the fourth floor to add The Blue Box Café, its first-ever dining concept. Also serving lunch, the café features the chain’s classic robin’s-egg blue motif splayed across the walls, seat covers and plates. The café offers a broad view of Fifth Avenue reaching up to where Central Park begins.

The floor’s renovation is the first major project from Reed Krakoff, who was appointed chief artistic officer in January. Mr. Krakoff is best known as the long-time president and executive creative director for Coach before he launched his own fashion label in 2015.

Mr. Krakoff said in a statement, “The space is experimental and experiential — a window into the new Tiffany.”

Tiffany’s overall sales have slowed in recent years in part because Millennials are said to be seeking out experiences rather than “stuff.” Some feel the café addresses the younger set.

Wrote Kenzie Bryant for Vanity Fair, “Gone is all the masculine wood paneling and stately dark marble (though they remain on the three floors below). In their place is light marble and white walls, full of nooks for exploring and eminently Instagrammable whimsy.”

Barney’s, Saks, Bergdorf Goodman and other nearby flagships have long included restaurants, but Tiffany’s past management might have felt the space was too limited or that fine jewelry browsing was not complemented by dining.

A recent New York Times article recounts how designer and high-end stores are adding or upgrading dining options to drive traffic and make the experience more social and relaxing. The moves are seen to counter the appeal of online shopping.

Designer Todd Snyder told the Times, “A cafe softens the place, making it less about shopping and more about community, where you are eating food, drinking wine, hanging out with your friends. Just a store is boring and you can do this online.”

DISCUSSION QUESTIONS: Is it now more appropriate for Tiffany to add dining to its flagship vs. in the past? How might the café enrich the Tiffany experience? Do you see more upside or downside to high-end stores adding or elevating their dining options?

Please practice The RetailWire Golden Rule when submitting your comments.
Braintrust
"I vote to give it some time; they are just getting started on a remake."

"Personally I love it but we are talking about attracting Millennials, most of whom have never heard of the movie much less seen it."

"Too many Tiffany shops look and feel old-fashioned, while large swathes of the offer just don’t resonate with young shoppers."

15 Comments on "Will breakfast at Tiffany’s attract Millennials in search of ‘Instagrammable’ experiences?"

This is selling the image of the brand — not the brand. Luxury is exclusivity; when it can be purchased with a croissant, it doesn’t add to the experience of those who can afford to shop there.

I am sure the cafe will be a success, not least because of the iconic name, the great location and the movie connection.

However, I am not convinced that this is sufficient to reconnect younger shoppers with the brand. That requires a reinvention of the offer and a complete rethink of the store environment. Too many Tiffany shops look and feel old-fashioned, while large swathes of the offer just don’t resonate with young shoppers. Those are the things that need to be fixed.

So this is a step in the right direction but it is not a solution in and of itself.

The Tiffany cafe will certainly add to the flagship store experience and will resonate with their already loyal customers and tourists. However the iconic 180-year-old luxury jewelry store has built its reputation based on exclusivity, quality, craftsmanship and naturally the treasured blue box.

The opportunity to enjoy a transporting breakfast for their loyal luxury customers is there, however the digital native, socially-connected set is looking for other ways to engage with a brand without having to set foot into the flagship Tiffany store. The uniqueness of Instagram is that its platform’s reach is global and it connects the brands with the consumer without having to physically be in the store.

There are other methods to connect with the Millennial set, and breakfast at Tiffany, while a nice add-on experience, is not the ultimate solution to expand the brand’s reach.

The “instagrammable moment” feels a bit forced, but the idea of experimental and experiential as a peek into the future of the Tiffany retail space is on point. So is the idea of giving shoppers a space for community — eating certainly is part and parcel of that. I vote to give it some time; they are just getting started on a remake.

I have mixed feelings on this one. Personally I love it but we are talking about attracting Millennials, most of whom have never heard of the movie much less seen it. I’m just not sure funky Millennials will find eating at Tiffany their kind of experience. It almost has a touristy ring to it, for my 2 cents.

This is a gimmick. Eating breakfast isn’t going to suddenly put money in your pocket, Millennials still can’t afford it and a muffin or fancy croissant is great, but the brand will attract their loyal followers, which are people with money.

I think we need to clarify the question a bit. Whether dining creates additive value for Tiffany is not the same question as, “Will Millennials get what Tiffany is doing?” And neither of those questions approaches the real question which is, in my mind, “How does this move impact the brand?”

While I realize that Millennials are a creation of marketers and not a firm demographic cohort and that, as a result, there is disagreement about who is, or is not, a Millennial, let’s pick 1994 as the arbitrary end of the cohort. When the last Millennial was born, Breakfast at Tiffany was already 33 years old. Today, the movie — and therefore the reference — is celebrating its 56th birthday. So is Tiffany positioning itself as a retro brand? Would they have been better off opening a cyber cafe or a creative AR environment than worrying about Instagrammable spaces? Of course, only time will tell how well this approach works but — based on the article — I’m not too bullish on its prospects.

They have to evolve and this is a good first step. One of our team (not a Millennial!), is off to New York next week and this is immediately on her list as an experience, so they will get some of her dollars that they would not have previously. On its own it’s in the area of interesting, but they will need to evolve the journey from the croissant to the tiara — it’s a big chasm to cross.

Appropriate? It took them long enough to capitalize on a brand asset. However the consumer target has to be broader than Millennials. Millennials eschew material goods in favor of experiences, they also follow fads and are are quick to move to the next experience.

Not all retail brands have that organic tie-in to a restaurant and for most of them the restaurant might be a part of customer service as opposed to the main destination.

I suspect we are missing the mark in talking about Millennials — Lee’s comment about it being “touristy” is closer – this move is perfect perfect for small international tour groups coming to NYC and wanting to combine iconic attractions with high-end shopping for one-of-a-kind merchandise not available in Hong Kong, London or Dubai.

Millennials — along with Gen Z — are the market of the future, which is exactly why we should be talking about them. Again, as I stated in my post, the critical issue is what this all means for the Tiffany brand. Turning Tiffany into a tourist destination means thinking of the brand as either kitch, a cliche, nostalgic, or part of “tourist New York” — like the t-shirt guys, the pretzel carts and those obnoxious people in costume in Times Square, posing for selfies. But none of those positions help the Tiffany brand redefine itself for the future. The problem isn’t whether or not Tiffany can make a few bucks selling breakfasts and lunches or get lots of hearts on Instagram, it’s whether or not the brand is relevant today and — more importantly — tomorrow.

I think this will work — the culture of meeting for tea/coffee for more relaxed business meetings and social get-togethers in quirky places is growing and on-trend. However it will only work if the service and quality of the whole experience is at a level expected by the Tiffany brand. Very careful attention needs to be paid to this — there is a high height to fall from if not. As for attracting Millennials — yes, possibly. Even if they haven’t seen or heard of the movie they tend to be attracted by a more diverse selection of music, movies, clothing, etc. from previous eras than previous generations. Time will tell but I hope it’s a success.

There’s little point in offering a service unless you can do it well, and I’m not sure it really makes sense for them to devote the resources to this to “do it well.” (Will Millennials even understand the point? They’re two generations removed from the movie.)

As for their sales decline, it may or may not be true that the demographic as a whole is less into buying “things”, but I’m not at all sure that’s true of the sub-group that patronizes Tiffany’s. Methinks NYC still has plenty of conspicuous consumers — of all ages.

Every brand must evolve its image to attract younger generations and Tiffany is not immune to this. The trend of transforming retail spaces into experiences is clearly reflected here and is part of a broader re-imaging of Tiffany. It’s not clear to me the target millennial and Gen Z customer of the future have enough historical reference to the movie to make that connection with the cafe, but the point is that isn’t necessary at all for this to be successful.

However, experiences alone won’t lead to sales if the products aren’t as fresh to the target audience. Not sure that’s been addressed here and the risk is that the care will just resonate with loyal customers and tourists alone. It’s a great effort and we should see more of this from Tiffany and other luxury brands trying to connect with an audience that doesn’t have the same respect for luxury that prior generations did.

If one of the causes for Tiffany’s decreased sales is really the Millennials’ need for experiences rather than “things,” then this is a really good strategy to begin with. It has certainly attracted more Millennials lately, but I wouldn’t consider it as a complete rebranding.

Braintrust
"I vote to give it some time; they are just getting started on a remake."

"Personally I love it but we are talking about attracting Millennials, most of whom have never heard of the movie much less seen it."

"Too many Tiffany shops look and feel old-fashioned, while large swathes of the offer just don’t resonate with young shoppers."