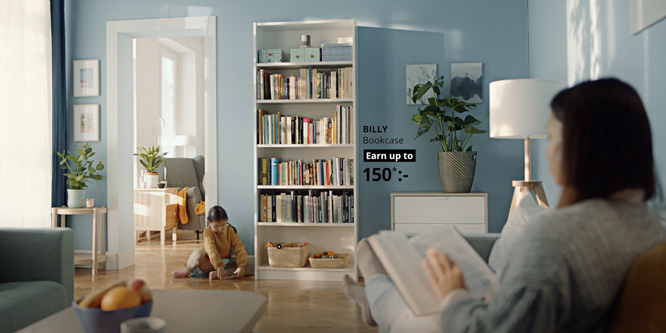 Last month, IKEA announced plans to make itself a fully circular business by 2030. This month in Canada the chain is using Black Friday as a way to promote its newly-launched furniture buyback program.

IKEA Canada is kicking off a campaign called #BuyBackFriday in what it says is an attempt to change the conversation from one of “mass consumption” to one of “mass circularity,” according to Adweek. The campaign allows customers to sell back gently-used furniture (to be refurbished and resold) in exchange for double the usual in-store credit. An advertisement for the initiative is pegged on the chain’s popular Old Billy bookcase, which can be returned for up to $150.

The program that #BuyBackFriday is promoting will also launch in 26 other nations, but not in the U.S. The new initiative replaces multiple different buyback strategies already implemented at IKEA stores around the world with a single, global approach.

Under the Buy Back system, IKEA will assess the value of the used furniture based on its condition and give sellers a store gift card with no expiration date in exchange. Dressers, bookcases, shelving units and many other common IKEA products will be accepted, though not everything the chain sells will be eligible.

Promoting reusability has become a major goal for IKEA, a chain whose product is affordable but often has a short lifespan, putting the company sometimes at odds with consumers’ newfound focus on environmental sustainability.

The furniture giant announced in September the opening of its first test store in Sweden dedicated to reselling damaged and repaired furniture.

IKEA is not the first retailer to direct its Black Friday messaging away from the consumerism with which the shopping holiday is closely tied. REI has for a number of years run a campaign called #OptOutside, whereby it closes its doors and encourages customers and employees to enjoy spending time outside and appreciating nature instead.

DISCUSSION QUESTIONS: Do you think Black Friday is the right time for IKEA to start promoting its Buy Back program in earnest? Do you expect IKEA to bring this initiative to the U.S.?

Please practice The RetailWire Golden Rule when submitting your comments.
Braintrust
"I would expect IKEA to bring the program to the U.S. Maybe an Earth Day announcement this coming year?"

"So IKEA wants to change the direction of Black Friday? Good luck with that."

"It’s clearly time to update Black Friday, and this is the year to do it. Too bad IKEA didn’t see fit to offer this in the U.S."

8 Comments on "Will Black Friday be the day customers buy IKEA’s environmental promise?"

In a typical year I would say “bad timing,” but given the craziness of this year with the pandemic I say “go for it.” Especially since they are doing this outside of the U.S. for now. If it was a U.S. announcement I would be concerned the messaging would get drowned out because of Black Friday. I would expect IKEA to bring the program to the U.S. Maybe an Earth Day announcement this coming year?

So IKEA wants to change the direction of Black Friday? Good luck with that. The Buy Back program is a good idea but the timing is wrong – consumers here still like Black Friday in whatever form it takes. IKEA already knows this because the program isn’t happening in the U.S.

Consumers are looking at Black Friday promotions. This is a great move for three reasons.

We all understand the tie into Black Friday as a counter message to the obvious consumption it represents. I was surprised to read the U.S. was not one of the countries where the program was offered. As a Chicago Tribune article stated perhaps they are waiting for Earth Day to make an announcement that the program is now available in the U.S.

I love this idea. Not only do I embrace the idea of “mass circularity” over “mass consumption,” think of it from a straight business POV. As a 20-something I buy my first piece of IKEA furniture. In my 30s my lifestyle changes and I have different needs. I send my 20-something needs back and get what fits for my 30s. Repeat for my 40s, 50s, 60s and into retirement. That is the best loyalty program I have ever seen. And I love the idea of introducing it on the day that has become a damning example of consumption culture. From a strategic point of view, people will be online and it will be very efficient in delivering the message. Even if no one readily sparks to the idea, IKEA sends a important message about who they are. At this point they are skipping the country that will provide the biggest challenge both operationally and culturally. I suspect they will continue to work on just how to introduce the idea in the U.S. The acceptance in… Read more »
1
|
0
-   Share

It’s clearly time to update Black Friday, and this is the year to do it. Too bad IKEA didn’t see fit to offer this in the U.S., but hopefully next year we will see an even better offer to replace the tired rat-race of holiday shop-till-you-drop.

I think it’s a GREAT time to do this. I think about REI and their decision to close on Black Friday the last few years to give their associates time to be in the outdoors. That was spot on for their brand and I think resonated with their customers. Given the pandemic and its effect on Black Friday this is the perfect time to start something like this. I think it reflects well on the IKEA brand and changing consumer sentiments on sustainability.

It’s unique and worthy of attention for that reason alone, but I’d question the long-term viability of this approach as it’s cash-heavy and low margin. REI launched a similar initiative recently and it’s too soon to tell if this will be sustainable…or profitable.

Braintrust
"I would expect IKEA to bring the program to the U.S. Maybe an Earth Day announcement this coming year?"

"So IKEA wants to change the direction of Black Friday? Good luck with that."

"It’s clearly time to update Black Friday, and this is the year to do it. Too bad IKEA didn’t see fit to offer this in the U.S."