Will Big Lots continue to stand out after the pandemic? 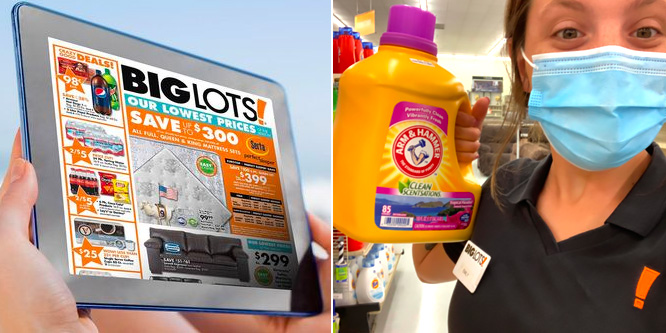 There have been some surprising retail successes amid the novel coronavirus pandemic, despite the overall catastrophic impact on the economy. The latest example is a chain that had languished in recent years but just reported a boost from pandemic-era factors.

Big Lots has experienced a stock surge of 60 percent this year and seen record sales growth in its most recent quarter, according to CNN. The closeout retailer is known for its broad selection of furniture, mattresses, kitchen appliances, toys, snacks, pet food, cleaning supplies and a few other disparate categories. It carries seasonal merchandise as well, selling patio furniture and gazebos in the summer and Christmas tree- and fireplace-related products in the winter. The chain has 1,400 stores spread over 47 states, mostly in strip shopping centers.

Analysts attribute part of Big Lots’ success this year to its selection of food and staples, which allowed the chain to stay open as “essential” during the strictest period of the U.S.’s spring lockdown. It has also seen a surge in home goods, mattresses, kitchenware and other non-food categories.

Low-price/discount retail is one category that seems to be weathering the pandemic better than others. Big names in the space like Aldi and Dollar General have not only posted strong numbers throughout the pandemic, they have both announced plans to continue expansions. Unlike Big Lots, however, Dollar General and Aldi were both already experiencing growth and success in the months and years leading up to the pandemic.

Big Lots does demonstrate a pattern of thriving in hard economic times. During the U.S.’s 2008 economic recession, the chain did quite well. As things began to pick up a few years later, Big Lots began making changes to try to provide a slightly more upscale offering that would succeed in an expanding economy. In 2010 it announced it was opening 30 higher-end locations in strip malls home to more prestigious retailers.

Since the beginning of the pandemic, there have been some standout successes outside of the discount space as well. For instance, Best Buy experienced record online sales during its second quarter as well as a same-store sales increase, despite being appointment-only for the first six weeks of the lockdown.

DISCUSSION QUESTIONS: Is Big Lots’ success merely a pandemic-era anomaly boosted by seasonal interest in products like patio furniture or do you expect it to keep building on its current momentum? What might other chains learn from Big Lots’ recent success?

Please practice The RetailWire Golden Rule when submitting your comments.
Braintrust
"Continuing to expand its target audience with new concepts like higher-end stores will help Big Lots to continue its sales momentum."

12 Comments on "Will Big Lots continue to stand out after the pandemic?"

There is no doubt that being considered an essential retail store provided a big boost for Big Lots’ revenues. Being open during the pandemic also created the opportunity to attract new customers that hopefully enjoyed the value prices and became more frequent shoppers. Continuing to expand its target audience with new concepts like higher-end stores will help Big Lots to continue its sales momentum. The discount segment has been outperforming other segments for several years and this will likely continue with many Americans still unemployed.

It’s their prices – with record unemployment or fewer hours, people are looking for deals. Big Lots has lots of deals.

Big Lots’ success was likely aided by the pandemic and their ability to stay open. However much of the groundwork for success had been laid before the pandemic. They have new store prototypes – those new stores are clean, well-lit and easy to shop. Their price points are attractive too. They have amped up their furniture collections with the purchase and integration of Broyhill, another win with the pandemic stay-at-home frenzy.

The challenge going forward will be keeping the momentum. People don’t need furniture and patio sets frequently but the chain offers plenty of decorative items, household cleaning products and food; with the economy likely constrained for their target consumer for another 12-18 months they should be in a good near-term position.

As for what others can learn; keep on top of the basics (clean stores, assortment, aggressive pricing, product availability). Amp up digital marketing and loyalty efforts. Know your brand and value proposition and build from there.

Big Lots and other discounters are the lucky beneficiaries of an economy that favors the wealthy but disadvantages average Americans. Financial uncertainty causes consumers to act more conservatively than they otherwise might. I’ll predict that this isn’t a blip, but a generational change that will last.

COVID-19 rule for retailers — Q2 is not projectable.

There is tremendous power in developing a love affair with customers. But your drum must constantly beat to keep the heat. I think Big Lots will leverage this strength continually.

Their good fortune to be labeled essential and be able to remain open was a blessing for them — As Raj Shroff said, however, they have greatly improved their stores prior to the pandemic and I think that paid off. Their stores are now well lit, easy to shop, attractive and the prices are fantastic. When you add all that up it is all win. Now they must work to keep the customers they were able to attract. That should not be difficult given the state of employment currently! Big Lots could become a regular visit for their new customers.

I’ve seen a notable upgrade in the design appeal of their products over the past year. Where before the inventory was often basic and budget, there’s now a lot more trendy cool and on budget. I think that’s created more happy shoppers and will serve to keep the new ones venturing in for basics coming back. So could we say that COVID-19 rule #2 for retailers is: if they’re coming in because they HAVE to in Q1, get them back in because they WANT to in Q2!

Certainly, Big Lots picked up some tail-winds from the pandemic, but perhaps it’s not an anomaly. As big box retailers struggle to stay in-stock on pandemic essentials (e.g. disinfectants), consumers, rightly so, are looking elsewhere. During this pandemic, Discount and Close Out Stores have been a diamond in the rough for new customers and a saving grace for loyal customers. No doubt they are absorbing some of the fall-out from out-of-stocks, but this is an opportunity to build new relationships and cultivate brand loyalty for true long-term gain.

If there is one thing to take way from Big Lot’s success, it’s relevance. They have delivered on food and household essentials while making the long days at home a little more comfortable with affordable home goods. Big Lots is a shining example of how relevance + availability + affordability are smart but basic ways to win at retail.

The pandemic has perhaps made the home much more important in Americans’ minds as well as their lives. And it’s going to stay that way with the likely continuation at a high level of working remotely. Big Lots’ timing was good. In 2019, the retailer introduced new furniture lines, lease-to-own-financing, Operation North Star strategic transformation and new store designs. Furniture was already a high-scorer in sales growth, while consumables lagged in FY2019. Now the chain is benefiting nicely from the pandemic-caused interest in the home, and that will probably continue.

Once again we see proof that being deemed an “essential retailer” is the most essential retail strategy of 2020 to drive success. Big Lots is also helped by the surge in purchases of the home goods and home improvement segments as people have been staying a time so much more than they’re used to. The desire to make their living spaces more enticing and enjoyable is absolutely driving these gains for Big Lots. I don’t expect that surge to dwindle just yet, but it will be interesting to compare holiday season results in these sectors with summer performance. As the weather cools, so may the desire of consumers to buy in these categories.

Braintrust
"Continuing to expand its target audience with new concepts like higher-end stores will help Big Lots to continue its sales momentum."