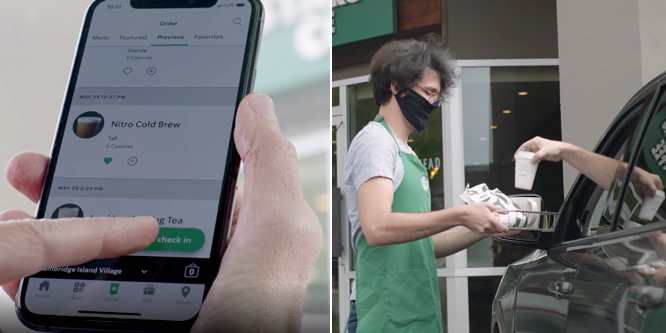 Starbucks has a pretty solid reputation as an employer in the retail and foodservice industry space, but some of its current and former baristas are saying management doesn’t understand the pressures of the job and is actually contributing to making things harder for workers.

Nat El-Hai, who worked as a barista at the chain, told Insider that Starbucks’ mobile app allows customers to place orders in such quantities that they can overwhelm a store’s ability to fulfill them on time.

Mobile orders typically start coming in as soon as stores open and build from there during the morning rush. An unidentified barista from another store said that it’s common for seven orders a minute to come in during the busiest times and that mobile orders make up the majority of those placed.

High order volume, understaffed locations and customers ordering off-the-menu versions of Starbucks drinks all contribute to the pressure of doing the job.

Customers often place orders via the mobile app and arrive before the scheduled time, upset that they have to wait for their drinks and food. Some take their frustrations out on workers behind the counter.

Other customers that show up well past their scheduled pickups get very angry if staff eventually throws their drinks out thinking that they are not going to be picked up.

Making drink modifications, often inspired by TikTok videos, also poses a challenge for baristas that some say is compounded by the fact that the mobile app doesn’t restrict the number of ingredients that may be entered.

Buzzfeed News reported earlier this year on the “appucinos” phenomenon where customers place complicated orders with up to 13 separate ingredients. Some of these drinks have become so popular that they have become a large part of the regular orders placed at some locations. Not all baristas find making appucinos a nuisance — some even post social media videos of their own creations.

Starbucks maintains that the system is working as designed.

“We continue to leverage the advantages of our mobile app to elevate the personalization of the customer experience and deepen customer engagement,” Kevin Johson, Starbucks CEO, said on the company’s second quarter earnings call. “As a result, mobile orders represented 26 percent of U.S. company-operated transactions in Q2, up from 18 percent a year ago. As we have seen each quarter, our digital channels convenience has proven successful in driving demand.”

DISCUSSION QUESTIONS: Do the complaints by current and former baristas about Starbucks’ mobile ordering system have merit and does the company appear to be responding appropriately? What do you see as the internal and external challenges and opportunities facing Starbucks as it goes forward?

Please practice The RetailWire Golden Rule when submitting your comments.
Braintrust
"Starbucks needs to think carefully about how it organizes its operations and deals with peaks and troughs."

"(Not to brag but) I was a Starbucks barista in university when service was analog only. If we had to fulfill seven orders per minute, I would have quit."

"On the whole, this is a nice problem to have at the moment. But there is a danger that it will become more annoying, before becoming a full-blown PR nightmare."

15 Comments on "Will baristas crack under Starbucks’ mobile ordering pressure?"

Before the pandemic hit, a lot of Starbucks locations were struggling to cope with the volume of orders from multiple channels – in person, drive-thru, mobile. This was exacerbated by customization where people ask for non-standard products which take longer to make. In some ways, this was a great problem to have but it also created longer wait times and reduced customer satisfaction. Starbucks needs to think carefully about how it organizes its operations and deals with peaks and troughs.

I’ve already had more snarky remarks from baristas in the last few months than I had in the previous 10 years. It seems like there should be two separate operations: to-go staff and “deal with the people” staff. Or brand damage may ensue.

Starbucks’ business is roaring back while simultaneously facing short term headwinds like a cup and labor shortage. The app is one of the best in the F+B app market – Chipotle is probably second. Starbucks can improve their order-to-completion time. Even before the pandemic, there were challenges and shortfalls. I do not know specifically, but I can assume CEO Kevin Johnson is addressing it and is most likely doing so with technology.

Starbucks’ bespoke beverage model is at odds with mobile ordering, pure and simple. That said, only Starbucks knows whether complexity and high expectations are hurting its business or whether they are just a speed bump in the scheme of things. Either way, demoralized employees and teed-off customers aren’t a sustainable combination. Starbucks is going to have to simplify its mobile menu or at least provide incentives for its customers to pare things down.

I thought I saw, in one Starbucks store, a terminal with a barista assigned to that terminal to handle mobile orders — which would make sense unless one terminal can’t handle the business. Starbucks should notify those orderers that want 10+ ingredients that it will take longer to process their order.

I have been watching the TikTok videos on how to order off-menu and what these customers order is insane. On an average day the lines at the Starbucks drive-thru near our office wraps around the building. Inside, the baristas barely have time to breathe.

I hope that the Starbucks people who insist this program is working spend quality time in the stores watching what goes on because their frontline is exhausted.

The service industry is already struggling as the labor force hasn’t been able to recover to keep up with consumer demand. It would be appropriate for Starbucks to listen to their staff and update their technology to ensure a positive consumer experience.

On the whole, this is a nice problem to have at the moment. But there is a danger that it will become more annoying, before becoming a full-blown PR nightmare. Perhaps Starbucks needs to think out of the box, expanding on the self-service options from coffee stands to machines that make cappuccinos. It is quite possible to alleviate much of the rush during the peak times.

They’re already on it – I was exhibiting at an office products trade show in 2019 across the aisle from a Starbucks booth where they were demonstrating an all-in-one machine for corporate canteens. Pop in a clover capsule, punch in your selection, and you got a very respectable espresso drink with the mocha and foam. Sure, the machine was the size of a refrigerator on its side and cost over $10,000 – but it showed that the automation efforts for in-store use were also being spun out to enlarge the number of venues where the company’s products could be enjoyed. I expect we’ll be seeing robot Starbucks stands very soon.

(Not to brag but) I was a Starbucks barista in university when service was analog only. If we had to fulfill seven orders per minute, I would have quit.

Yet Starbucks sees the big picture of how personalized, omnichannel service affects overall performance. If customer complaints rose significantly, the chain would surely change its approach.

It’s clear that Starbucks has found that perfect combination of hyper convenience and unlimited choice that customers love. But it’s equally clear the success of mobile ordering and infinite flavor combos has far outpaced the operating systems in place to deliver on these services. Unfortunately for Starbucks human nature is such that it is better to not offer something at all than to show us what we want then fail to follow through. So much of Starbucks’ success is because of their promise of excellent employee service – it’s the cornerstone of their value proposition. It’s crucial that they quickly work to find a better balance between what they offer customers and what they can actually accomplish, starting with limiting how much customers can alter beverages. Customers and employees both will ultimately be happier – customers won’t develop choice exhaustion and employees can get back to sanity.

Starbucks cafes also aren’t built for the influx of mobile order traffic. There’s hardly any room for people to wait for their mobile orders, which adds additional pressure and frustration to the process. They could start taking a page out of many retailers’ books and redesign store layouts to comfortably accommodate those waiting for mobile orders.

The app also needs to get more precise with time estimations for when orders will be ready. Machine learning and surveys of buyers asking how accurate the pickup time was can assist this effort, and it will be very worthwhile to better level-set expectations.

Physical locations have a way of moderating demand to make drink preparation work well. Without that same kind of moderating through the mobile app, Starbucks could end up with a train wreck of dissatisfied baristas and that means dissatisfied customers.

Just because an infinite number of orders CAN be placed doesn’t mean Starbucks should allow it. Seems to me another situation where the myth of digital has led to incredible error.

Yes, these complaints have merit and no, the company is not responding appropriately. When you offer consumers a shopping option, you first better have systems, procedures, and labor in place to deliver on that option at a high level of satisfaction for both customers and employees. In many bars, for example, their are bartenders who – literally – take care of customers at the bar and bar backs who almost exclusively service orders from the floor. Maybe that’s what Starbucks needs to do. The “appucino” problem is a little harder to address unless the chain were to ban customization which is at the heart of their brand and the source of a good deal of “upsell” revenue.

This business model is simply unsustainable. Starbucks is making their baristas into machines. Yes, some staff may find the pace exhilarating. But by and large the vast majority of them just want to do a good job—of servicing customers with a good cup of whatever—and not be turned into dervishes. Also, those walk-in customers, who too often bear witness to the near-calamity of it all as they wait (and wait and wait) hardly appreciate it. However they do, at least the truly conscious ones, while seeing the tumult, feel a certain amount of sympathy for those being put under such distress. ‘Bucks could learn something by watching the best and busiest bartenders at work. They’re often able to serve the most at-odds patrons with their even odder, ordered concoctions and do so at a maddening pace. But at least the pace is within that bartender’s actual purview (and physical grasp). Taking it and making it about orders coming from everywhere at once is surely not about order (or about having “orders” properly placed). Perhaps the… Read more »
1
|
0
-   Share

Braintrust
"Starbucks needs to think carefully about how it organizes its operations and deals with peaks and troughs."

"(Not to brag but) I was a Starbucks barista in university when service was analog only. If we had to fulfill seven orders per minute, I would have quit."

"On the whole, this is a nice problem to have at the moment. But there is a danger that it will become more annoying, before becoming a full-blown PR nightmare."