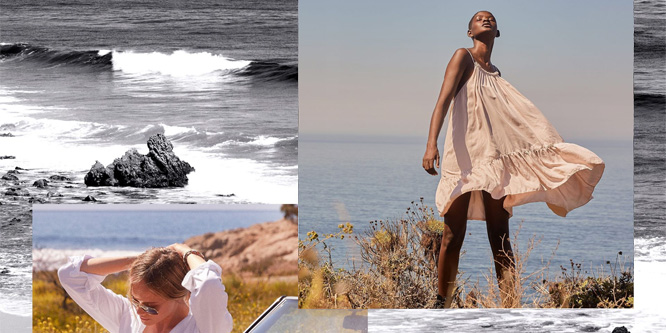 East Hampton on New York’s Long Island is a place where the rich, famous and others go to get away from the grind of the city during the summer months. It is also home to a new start of sorts for American Eagle Outfitters (AEO), which has opened a concept store in the community that appears to mirror the new take on life that many feel after months confined to their homes by the coronavirus pandemic and the emotional tumult many feel as protests against racial inequality continue.

The new concept — Unsubcribed — bills itself as the antithesis to the fast-fashion approach to apparel and accessories. An Instagram page with photos of beach scenes describes Unsubscribed as “consciously-made, slow fashion,” adding “we believe in being kind­ — to ourselves, to each other, and the world. nothing more. nothing less.”

Women’s Wear Daily, which first broke the news about the new concept, reports that Unsubscribed plans to feature only two collections a year made up of its own private label as well as third-party brands, a departure for AEO. Brands include Boyish, Indego Africa, Melissa Joy Manning and Veja. Prices will start at $5 for accessories and climb as high as $550 for dresses.

AEO has not announced plans for expansion of the concept, apparently taking it slow, as it adds a fourth banner to its portfolio in addition to its namesake business, Aerie and Todd Snyder.

Unsubscribed will also launch a website to complement its physical store business, but it will not offer online purchasing.

The retailer’s employment ads for its brand ambassador (sales associate) position seek people to be “the face and voice of our company, build brand recognition, and successfully promote our product through the engagement of customers in meaningful ways to increase our company’s brand awareness and to generate sales.”

Earlier this month, AEO reported a first quarter loss of $257 million as it was forced to close stores and engaged in “aggressive inventory liquidation,” according to the company’s CEO Jay Schottenstein.

AEO has seen its business bouncing back in reopened stores. It reported two weeks ago that stores it had opened were generating about 95 percent of the sales that it reported for the same locations last year. At the same time, its digital sales continue to be up, as well.

DISCUSSION QUESTIONS: Does Unsubscribed sound like a concept that may have wings for American Eagle Outfitters? Do you expect other retailers to be more willing or reluctant to test new concepts now than before being forced to close stores due to the pandemic?

Please practice The RetailWire Golden Rule when submitting your comments.
Braintrust
"I like the concept and it makes sense to offer a fresh take on apparel, but I question why there is no online purchasing."

"Not selling online is odd, but I do like AEO’s take on slow versus fast fashion and garments made from sustainable materials."

"Love it. Fast fashion fizzled last year (likely before) and prior to the pandemic, sustainability was a big driver in apparel and fashion."

Hats off to AEO for executing this new concept in the midst of a troubled market. They could not have strategized and implemented this new retail model all within the last two to three months, so this has deeper roots than being a response to the pandemic. It’s a probing test into a whole new attitude consumers may be moving to. Two collections a years sounds a little low-energy, but that thinking definitely slows things down. Results might be tough to read in the recovery mode we are in, but I still have to applaud the willingness to take on this kind of initiative.

Love it. Fast fashion fizzled last year (likely before) and prior to the pandemic, sustainability was a big driver in apparel and fashion. I think this will continue to be a value that much of the population will adopt and I see the location as a great fit for this concept. The one head-scratcher is that there is no e-commerce functionality – I think that is not a good move.

The Unsubscribed concept seems promising although I am surprised that they are not offering any online purchasing after the last few months have demonstrated the need and benefit of providing different customer purchasing and delivery options.

There has been a slow food movement for a long time and this resonates with a lot of consumers who are more concerned with issues like sustainability, quality, and authenticity. These same consumers are also concerned about similar things in fashion, so this concept seems to meet a need. However as with anything, the success of this relies on having products and collections that are compelling – not just on ethics and values. As for whether it could become mainstream, I certainly think it has growth potential but it’s likely a more niche part of retail.

Unsubscribed is an intriguing concept. Other than what’s outlined in George’s article, there isn’t a lot more information out there. Its Instagram account shows two garments and its storefront isn’t much different than indie shops you can find in any small town, but maybe that’s the point.

Not selling online is odd, but I do like AEO’s take on slow versus fast fashion and garments made from sustainable materials. A single store and just two collections a year keeps Unsubscribed’s branding on point.

I like the concept and it makes sense to offer a fresh take on apparel, but I question why there is no online purchasing. It has become a huge part of how we shop today – why not take advantage of it?

An interesting concept – putting it in East Hampton doesn’t really lend itself to a major national rollout anytime soon. However I could see them take learnings from the store and then potentially scale them for their other nameplates.

I think AEO’s concept of “Unsubscribed” has wings. AEO is a brand that attentively listens and pursues new opportunities with their customers in mind. They did this with their rebranding and body-positive campaigns. This company has a really good understanding of its customers and following the trend of sustainability is a smart move. This could be a successful brand if they tell the story well. As far as other retailers testing new concepts goes — this is no longer a choice. Retailers will be less reluctant to test new concepts because adaptability and pivoting are mandatory for survival in this new era of retail. With social and digital media, barriers of entry for testing new concepts are low. The investment and risk are a lot lower. I predict we will see a lot more concepts emerge.

What a great name to accompany the concept. With a controlled supply and limited location availability, I bet this becomes a nice, profitable business. Whether it ever scales out to be a national chain is another story, but that is probably not the intent now. It’s good to see some bold experimentation going on.

This is an outstanding approach and strategy by AEO, especially with all the backlash and negativity surrounding the lack of sustainability and environmental consciousness the industry has faced with fast fashion. Thankfully, throughout the pandemic, there has been no lack of creativity and innovation and this is a fine example of what is possible even during troubling times.

There is no time like the present, and customers are and always ready for a sense of escape and excitement. We have seen the level of fatigue and disinterest in the fast fashion model. Instead of relentless fashion releases, a lack of sustainability, and a disregard for the environment, AEO is challenging us to be “kind, conscious and free-spirited.”

Interesting test. I’d venture to say they know something from online efforts and research so the question now is scale. In any case, it’s very smart now and going forward to get tests out there and explore the new waters ahead. Everything has changed so any bellwether knowledge will be powerful.

“Consciously made, slow fashion” reflects pre-1980s apparel manufacturing here in the U.S. before large swaths of the apparel industry were outsourced offshore. AEO’s slow fashion statement after decades of offshoring fashion is refreshing and seemingly personal to the AEO brand. Other retailers joining AEO in this is unlikely due to the fact that the U.S. has few domestic apparel manufacturing suppliers left, whether in fiber or textiles or trim. Additionally, domestic apparel manufacturing has, in my opinion, always lacked “the needle” to be competitive with apparel products made offshore. Unsubscribed makes sense. Now come the lemmings, the buzz, and the bandwagon!

Great concept! This really sounds promising and plays well to the sustainability concerns of the younger generations. I think their slow approach is also great — see what works and keep it exclusive with a sprinkle of stores in select locations! I hope it wins!

Braintrust
"I like the concept and it makes sense to offer a fresh take on apparel, but I question why there is no online purchasing."

"Not selling online is odd, but I do like AEO’s take on slow versus fast fashion and garments made from sustainable materials."

"Love it. Fast fashion fizzled last year (likely before) and prior to the pandemic, sustainability was a big driver in apparel and fashion."