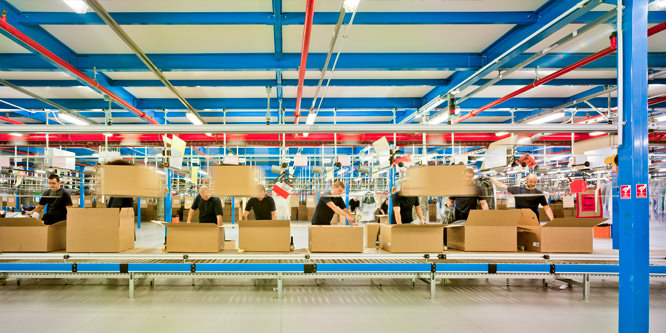 Are fast-fashion’s better days behind it? Will on-demand manufacturing reinvent the clothing business as we know it? These are questions that may be answered if Amazon.com moves ahead with a patent it filed in late 2015.

Recode has reported on the patent application, which details a highly-automated system using textile printers, cutters and an assembly line. The plans also include cameras positioned to capture images of the garments produced in order to monitor quality and increase efficiency during future runs. Amazon’s on-demand model emphasizes cost reduction, envisioning a process in which manufacturers’ orders are organized in batch runs determined by factors such as the shipping addresses of customers.

Amazon sees its system having applications beyond clothes to include a wide variety of source materials and extending to categories such as bedding, curtains, towels and footwear.

The e-tailing giant has set its sights on becoming the leader in apparel retailing in the U.S. This includes the creation of private brands such as Amazon Essentials, Buttoned Down, Ella Moon, Goodthreads, Iris & Lilly, Lark & Ro, Mae, North Eleven, Paris Sunday, and Scout & Ro.

A survey conducted last fall by Morgan Stanley AlphaWise found that 58 percent of respondents had purchased clothing from Amazon over the previous six months. Kohl’s with 37 percent was a distant second.

Please practice The RetailWire Golden Rule when submitting your comments.
Braintrust
"As is so often the case, if Amazon’s doing it other players up and down the entire value chain should pay attention."

"Exciting new development. Thinking beyond just Amazon, I could see this taking a 30 percent position of the supply chain within the next five to 10..."

"I wonder if this is a precursor to Amazon going into private-label garment manufacturing rather than creating an in-house brand of on-demand clothing."

13 Comments on "Will Amazon’s on-demand manufacturing create trouble for fast-fashion?"

As Zara and H&M have proven, fast fashion has been a successful disruption to traditional apparel manufacturing/retailing and it seems reasonable that this can be done in other categories as well. Amazon’s patent and plans for on-demand manufacturing are telling and, as is so often the case, if Amazon’s doing it other players up and down the entire value chain should pay attention.

If it can be done with great accuracy and at a competitive price point, on-demand manufacturing could be a game-changer for clothing, shoes and textiles. Imagine a retailer not having to carry inventory — saving space and capital. Laser measurement would assure a perfect fit. The only question would be how to handle returns.

Exciting new development. Thinking beyond just Amazon, I could see this taking a 30 percent position of the supply chain within the next five to 10 years. In other words, most fashion will still be ready to ship or available in showrooms. But rather than only getting inventory from in-store stock, DC, 3PL or traditional manufacturers, there will be quick manufacturers creating custom batches closer to customer locations. This is a fascinating new development in the omnichannel of retail purchasing and in fashion creation fulfillment!

In categories such as bedding, curtains and towels, sizes are more standard than perfectly-fitting apparel and require less on-demand manufacturing. Customization such as a particular design or family initials are more appropriate for these categories. There is opportunity there like Things Remembered in the gifts category. In apparel, the need for a more customized fit presents a larger opportunity for on-demand manufacturing, a la Indochino in men’s apparel. That model may prove very challenging to existing apparel retailers.

Amazon pretty much wants to be the first trillion dollar retailer and I believe they will do it, as they have the wind at their back and the loyalty of their customer base which loves to shop online. Clothing has some of the highest margins of all industries. I have been to conventions with my friend in Vegas several times while he was ordering shoes and athletic apparel and other clothing lines. The cost of these products coming into his store was shocking to me. He could run 50 percent off sales all day on this stuff and still double his money, which tells me that Amazon has a huge cushion not only to create this on-demand product, but also to sell it at a very competitive price and still make a handsome profit. Look out everyone, this will probably make several stores very nervous in the near future.

Spot on analysis, Tony! Bezos’s original model focused on efficient disruption of fulfilling routine consumer needs with more convenient, and usually cheaper, options. That Amazon has that down pat is not in question. The subtle shift I have seen from Amazon in the last few years is that they now seem to have at least a “sub-strategy” of looking for categories where the margins are so great that they can work their disruption magic at a profit. That doesn’t mean Bezos will stop investing most of those profits in moon shots — he won’t. But it does mean he will be able to keep stockholders a little happier with increasing profitability to go with meteoric growth and unparalleled innovation.

I can see a spot in the retail market for on-demand clothing as part of a selection of apparel offerings. Consumers who want something customized for themselves that is different than other market offerings will be interested. However, there will still be a market for fast fashion. Items made one at a time will necessarily cost more to make and deliver per unit than those made in bulk. And how many consumers will wait for the time it takes to manufacture and deliver their custom item rather than order from a fast fashion house online or drive down the street to a retail store to get an item quickly? Amazon is likely to grow a customer item business using on-demand clothing, but fast fashion will not go away.

As brands and retailers get accurate visibility throughout their supply chain, on-demand manufacturing will become commonplace across virtually every category. Select automobile dealerships in Japan have been doing this for years. Add to this improved predictive analysis and artificial intelligence and on-demand manufacturing will actually be ahead of the demand. Before manufacturers get too far ahead of themselves their first priority is to get visibility to their at-shelf inventory in order to make certain their shopper can actually buy what they’re seeking. In short — resolve the out-of-stock issue first, then get smarter and evolve your on-demand manufacturing.

As Zara, Forever 21 and H&M have very successfully proven, fast fashion is here to stay. Amazon’s investments into the on-demand manufacturing apparel innovations, and potentially other areas, are significant and will serve notice to the fast fashion market leaders that the market is about to be disrupted.

Once Amazon achieves their economies of scale and ramp up their on-demand manufacturing engines, fast fashion will become even more fast, customized, accurate and even more reflective of what the customer trends are.

I wonder if this is a precursor to Amazon going into private-label garment manufacturing rather than creating an in-house brand of on-demand clothing. Part of fashion is the design process and I am not sure Amazon wants/needs to be a fashion house. It makes more sense to work with new designers (Project Runway-type collaborations) to create limited runs on-demand to satisfy consumer needs, and do custom pieces as necessary.

Amazon and others are late to pursuing on-demand fashions. This area was tried out with runway shows almost two years ago and there was not a high demand for get-it-now/on-demand styles.

Curtains and window coverings have been in the business of on-demand for a while. Amazon — because they are Amazon — won’t win that space. On-demand for towels? Really. Can’t anyone find something else to write about?

Retailers: deliver to shoppers needs, do not work so hard at creating more and more needs.

So the interesting question is what price on demand custom apparel, and how much of a premium a shopper will pay. (For a product they can’t take home with them, or get next day.)

With a driver of scheduling product to optimize shipping priority vs economic manufacturing runs, this yields more expensive cost of production than even a “fast fashion” cut, make, trim process. On the other hand, make to order reduces the potential markdown/margin issues of building to spec (unless of course returns run 20 to 30% of shipments of product that is custom and really hard to sell off elsewhere).

With Amazon, it’s never dull. Forces everyone to raise their game. Kind of like the era when Walmart was first opening stores, or getting into grocery wiping out everyone in their path, and of course ended retail as we knew it.

Amazon’s in-house fashion brands are doing well and overtaking Macy’s will be a big milestone in 2017.

Since Amazon is making serious strides as an Entertainment brand; it’s e-commerce monopoly in the 2020s is liable to become even more dominant than the current marketshare indicates.

This will push Amazon to be the most valuable company in the world; and being a leader in retail automation will be a big part of that. Amazon isn’t dumb; it knows the future of fast fashion is actually 3D-printing and on-demand customization of products in new ways.

The key point here is fast-fashion itself can be disrupted.

Braintrust
"As is so often the case, if Amazon’s doing it other players up and down the entire value chain should pay attention."

"Exciting new development. Thinking beyond just Amazon, I could see this taking a 30 percent position of the supply chain within the next five to 10..."

"I wonder if this is a precursor to Amazon going into private-label garment manufacturing rather than creating an in-house brand of on-demand clothing."