Will Amazon or Walmart win the clash of the retail titans? 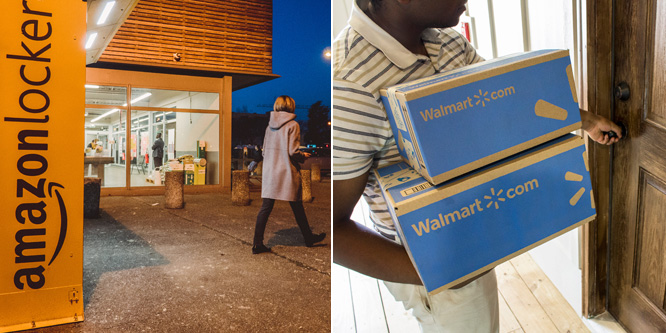 Amazon.com and Walmart’s contest for market dominance has emerged as one of the most-watched unfolding dramas in today’s retail world, and in a close decision yesterday, the viewers of RetailWire’s “Clash of the Titans” webinar decided Walmart has the edge in the ongoing battle.

In the webinar, RetailWire BrainTrust member Ken Cassar, principal analyst at Slice Intelligence, presented comparative online performance data on Walmart and Amazon. He was then joined by Carol Spieckerman, president of Spieckerman Retail, and Lee Peterson, EVP of brand, strategy and design at WD Partners, who for the sake of the exercise advocated for Walmart and Amazon, respectively.

Mr. Cassar positioned Amazon as the leader in terms of purchase frequency, logistics fulfilment, voice commerce and product search. However, he observed Walmart winning in terms of order size, with 25 percent of Walmart’s orders exceeding $100 vs. 38 percent of Amazon orders being less than $20. He also noted that Walmart’s BOPIS solution, Walmart Grocery, has expanded from seven percent of its online sales in 2016 to 17 percent of its sales in 2017.

“The retailer that’s able to win grocery in the long run is going to be well positioned to be the winner overall,” said Mr. Cassar.

In the first “round” of the debate section of the webinar focusing on which chain was better positioned to grow with young people, Ms. Spieckerman argued that grocery would drive frequent in-store trips for Walmart. Mr. Peterson countered that Amazon already had 40 percent of Millennials shopping on the platform and was poised to make gains in grocery. Webinar viewers chose Amazon as the winner of the “round” of discussion.

On the topic of customer experience, Mr. Peterson characterized Walmart’s brick-and-mortar footprint as a hindrance. Ms. Spieckerman countered that Walmart did not, like Amazon, force customers into a single channel and could win with in-store customer service. Webinar viewers chose Walmart for the round.

When discussing which retailer had the best brand image and company culture, Ms. Spieckerman argued that Walmart focuses, from the supplier perspective, on showcasing high-affinity brands that don’t get lost in the shuffle. In rebutting, Mr. Petersen compared the choice between Amazon and Walmart as the choice between working at Tesla and Buick. Viewers chose Amazon.

The debaters were finally asked to consider how challenging it would be for each company to scale up in the other’s domain. Mr. Peterson cited Amazon’s holiday e-commerce dominance (Amazon’s 48 percent to Walmart’s six percent) and acquisitions aimed at taking calculated moves into brick-and-mortar. Ms. Spieckerman countered that Walmart was making big moves into China with local partnerships, in places where Amazon was running into big competition from extant market-dominant e-commerce operations.

Viewers chose Walmart as the winner of the fourth round and, in a close decision, sided with Walmart as having the greatest likelihood of dominating overall retail market share long-term.

DISCUSSION QUESTIONS: Do you agree that grocery is key to the market share competition between Amazon.com and Walmart? Will Walmart’s gains in click-and-collect grocery give it an edge over Amazon in coming years or will Amazon’s dominance in e-commerce assure that it will prevail?

Please practice The RetailWire Golden Rule when submitting your comments.
Braintrust
"From media content to captive brands, battle lines are being drawn. Competition is healthy."

"Both will survive, thrive and together make life miserable for competitors and suppliers."

"Let me suggest who the real losers will be, and it’s not Walmart or Amazon. The middle-market grocers and big box retailers that haven’t changed..."

12 Comments on "Will Amazon or Walmart win the clash of the retail titans?"

Amazon wins the battle with Walmart. They are not stuck supporting brick-and-mortar with the commensurate overhead. Plus Amazon has the brand permissions to sell high-end goods.

Walmart is about cheap. Amazon is about selection, knowledge and convenience.

Both retail giants have strengths. Both will continue to grow. Other than the public’s love of a good battle, does there really need to be a winner and a loser? I like watching them compete.

To consumers, it’s not a battle of brick-and-mortar vs. online shopping, it’s about a seamless, frictionless shopping experience. Amazon and Walmart each have distinct legacy advantages, each have scale, cash and talent.

Amazon is approaching market saturation in mid- to higher-income market penetration with their Prime membership. Added classifications (grocery, pharmaceuticals, etc.) and a push for lower-income households (lower membership costs for Medicare families) is essential for growth.

Both companies are looking to create meaningful proprietary brands, available exclusively … From media content to captive brands, battle lines are being drawn. Competition is healthy.

The U.S. retail market is worth over $3.5 trillion (excluding auto, gas and foodservice sales). There is room for not just two, but a number of giant players. As such, it is possible for both Amazon and Walmart to win — indeed, both have grown sales over recent years. However, in the spirit of the article, my choice is for Walmart in the medium term. And possibly Amazon in the longer term. Despite all the focus on Amazon, it’s easy to forget that Walmart is more profitable and much bigger. It also pulls in an enormous number of shoppers each and every week, largely thanks to its grocery offer. Its logistics are superb and it has a comprehensive network of stores which it can use as distribution points for its growing digital business. If Walmart wasn’t adapting, this dominance would be under immediate threat. However, the investments made in digital, in stores, in acquiring new brands and in the offer are all paying dividends. Longer term, I don’t think Walmart will wane, but I think… Read more »
3
|
0
-   Share

Let me suggest who the real losers will be, and it’s not Walmart or Amazon. The middle-market grocers and big box retailers that haven’t changed their go-to-market strategy and value proposition in the last 10 years will follow Toys “R” Us to the dustbin of the industry. In grocery, there’s Food Lion, Acme and a few other Albertsons and Ahold banners. In mass, Sears Holdings and J.C. Penney are likely victims. Plus, several ecommerce-only retailers won’t make the cut or will be acquired.

This battle may well hinge on how future shoppers wind up defining “availability.” If “available for delivery to (or in) my home” wins that battle, Amazon wins. If “there for me to stop by and pick up at my convenience” (call it immediacy) wins — then Walmart stays in the retail driver’s seat. Since that decision will probably be category specific — at least for a while — and since grocery is the largest retail category and probably the last to cross the “availability divide” — then I agree with the webinar viewers that Walmart has a slight edge. But don’t count on that lasting forever.

This isn’t a battle for retail. It is a battle for the people’s mind. Whichever becomes more ubiquitous in people’s thinking will be the more successful. Note: I chose the word “people” not “shoppers.”

At this point in time, it has to be Amazon. Walmart is trying to catch up, but it doesn’t have enough bullets in their guns to attain the same mind presence.

For Walmart’s sake, they have stopped thinking about themselves as retailers and are trying to build the more encompassing connection to the people.

While we initially thought about Amazon as a retailer selling books, I doubt that was ever the end game in Bezos’ mind. I think we know the end game now and Amazon may only be half way there.

I believe the ultimate outcome will depend on what Jeff Bezos and his successors (because, yes, he will not run the company forever) choose to focus on. In order to fulfill its mission, Amazon has explored a wide range of bleeding edge technologies and logistics processes. The trick will be to avoid getting sidetracked and stifling the impulse to match Google in its quest to be everything to everyone, at all times, forever.

If Amazon gets distracted from building out a physical retail infrastructure to support the omnichannel promises it’s making, Walmart will triumph. Amazon will never become the physical store retailer Walmart is without directing all its efforts that way.

While Walmart’s stores (and BOPIS and BORIS policies) are the key to its e-commerce convenience, Amazon has the real edge. Amazon’s an exciting, hungry brand that knows no limits and remains top-of-mind, especially during the holidays.

Amazon already has urban Millennials hooked. To win in e-grocery, Amazon just needs to get these young, tech-savvy consumers in the habit of buying a basket of groceries often (vs. a few items at a time).

Most of all, I see massive opportunities in voice …

There’s a reason Amazon gobbled up 80 private brands. Consumers are less brand loyal. When consumers use voice ordering, Amazon wants Alexa to say, “Well, fiddle-dee-dee: We just happen to sell that type of product” and prioritize recommendations for its private labels for those categories.

Both will survive, thrive and together make life miserable for competitors and suppliers. The days of a proven retail formula are gone. Or maybe – the formula has more variables and fewer constants than in the past. Both of these retailers – and many others – get this.

Amazon versus Walmart is a proxy for the larger war: digital-first versus store-first retailing. It’s amazing to me that in the present era, a large real-estate footprint with long-term leases can turn out to be a liability for some retailers, where not long ago it was evidence of market dominance.

Grocery will be the pivotal theatre of battle, due to purchase frequency patterns and total value generated. In the near term, Walmart (and other supermarket operators) retains the power of incumbency. Amazon may succeed in reinventing the category, but it will need to reinvent stores in the process. It appears to be trying pretty hard to do just that.

This is not even close. We are essentially comparing boats that are speeding to a common goal, with one towing expensive, heavy, brick and mortar stores behind it (Walmart). This article focuses on the least profitable retail models (grocery) which ironically costs more to manage (refrigeration, short shelf-life, diverse inventory needs) and delivers the lowest gross margins and the highest shrink. Furthermore, the usage of a chart that compares grocery sales to a percentage of online sales is a poor comparison. Walmart.com doesn’t even hold a candle compared to Amazon in retail sales of any kind. Comparing its growth, year over year is like comparing the growth of adding another floor to a house compared to adding another story to a skyscraper. Where is the comparison of dollars generated, margins created, year over year? We need to be careful when comparing statistics, and follow Mark Twain’s example; “Lies, damn lies and statistics,” when creating fallacious arguments from “facts.” Grocery is not going to determine the overall winner here, but instead pure logistics, platform management, inventory… Read more »
0
|
-1
-   Share

Braintrust
"From media content to captive brands, battle lines are being drawn. Competition is healthy."

"Both will survive, thrive and together make life miserable for competitors and suppliers."

"Let me suggest who the real losers will be, and it’s not Walmart or Amazon. The middle-market grocers and big box retailers that haven’t changed..."