Will Albertsons have robots filling online grocery orders in its stores? 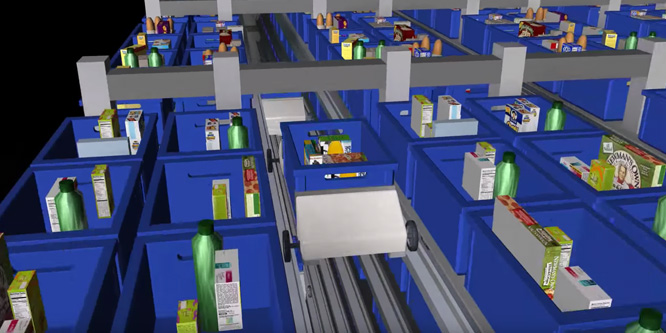 Albertsons announced earlier this week that it is engaging in a pilot to test a micro-fulfillment center that makes use of artificial intelligence and robotics to fill online grocery orders at the store level.

The system that Albertsons has chosen for the test creates a designated area within an existing store location, typically somewhere between 6,000 and 10,000-square-feet, where the most popular items ordered online are stored. When an order is received , the system uses totes and conveyors to deliver the selected items to an Albertsons’ associate, who will prepare the order for delivery. The vendor behind the system, Takeoff Technology, claims it greatly reduces the time it typically takes stores to fill individual customer orders.

Narayan Iyengar, SVP digital and eCommerce at Albertsons, said the test “is a major step in our commitment to being a customer-centric player in the digital food and wellness ecosystem.” Albertsons operates stores in 35 states and Washington, D.C.

The “hyper-local” approach that Albertsons is testing stands in sharp contrast to Kroger’s fulfillment deal with the British e-grocer Ocado, which operates massive automated warehouses to fill online orders. The two companies, which originally announced their intention to work together in May, agreed upon the service and operational terms of the deal this week. Kroger is expected to place orders for the first three warehouses before the end of this year and build to 20 over the next three years.

While the primary focus of Kroger’s Ocado deal is online order fulfillment, the grocer also intends to use it to “piece pick items” to the chain’s stores to fill in supply gaps there, as well.

DISCUSSION QUESTIONS: What do you see as the pros and cons to the “hyper-local” approach to fulfillment being tested by Albertsons? Ultimately, do you think this approach or massive warehouses such as those operated by Ocado will be the primary way food retailers handle online order fulfillment in the U.S.?

Please practice The RetailWire Golden Rule when submitting your comments.
Braintrust
" All that matters is getting customers what they want when they expect it in (for them) the least frictional way. "

11 Comments on "Will Albertsons have robots filling online grocery orders in its stores?"

It really does not matter if there are large regional fulfillment centers or in-store micro-fulfillment centers. All that matters is getting customers what they want when they expect it in (for them) the least frictional way. After that, operational choices for the brand providing the service are a function of their business/expense/operating model.

I’m with Ken on this one. I don’t think it’s just one or the other; it’s about getting product to customers effectively and efficiently. Both the Kroger and Albertsons model have a place in the market, although perhaps appropriate in different geographies.

A lot of this will come down to the cost of investment, which is still unclear. However, the Albertsons approach makes more sense to me. First, it makes use of the existing store base. This is good for two reasons. It does not involve any additional capital expenditure on new property. And it sweats an existing asset that is under pressure from declining sales and profit densities. Second, fulfilling from stores is ideal because it means that last-mile delivery is relatively local and, therefore, less expensive. Fulfilling from a central warehouse may be more efficient in some ways, but it often means delivery to home is less effective and more costly, especially outside of urban cores — something that has plagued Ocado in the U.K. in terms of its profitability. A store-based approach is also easier if customers want to collect from shops. All that said, as much as investing in this kind of initiative is sound. Albertsons also desperately needs to look at core aspects of its proposition. Own labels leave a lot to… Read more »
2
|
0
-   Share

The concept is great as far as the P&L is concerned. Especially over time. Less shipping costs, etc. I am assuming there will be no attempts to pick a lot of fresh food that way. At least I hope not. Humans have enough trouble accommodating tastes and determining the right substitutes.

In fact, I see finding appropriate personalized substitutes as the biggest problem for this type of system, centralized or hyper-local.

My first vision of this concept is that robots are going up and down the aisles picking merchandise off shelves along side of consumers. That is obviously not the case. Warehouse space behind the store or local distribution centers are the key to local grocery delivery. Robot-like support in a warehouse will be efficient. This is operationally no different than any other fulfillment center. The big difference is perishable items. Timely turnover of inventory is important. The grocery industry is used to this. It shouldn’t be an issue.

The customer is looking for convenience. The company or store that can offer the customer what they want, how and when they want it, will win.

It can succeed, IF — they do not pull from existing store inventory and the physical in-store experience is not affected. These are two different models with some overlap. e-commerce and physical. Layering in e-commerce that pulls from current store inventory causes major OOS headaches and has proven to be a negative factor for retailers. Second, the current store layouts and planning were not designed for micro-fulfillment centers and therefore creates a negative experience. Figure those two aspects out and this idea will work!

Last-mile delivery from the store can be valuable in specific cases, but it’s not a panacea. The entire supply chain is still required for the delivery to happen. This can only work if there is excess inventory at store locations (otherwise, it’s just a co-located DC), and that in itself increases days sale outstanding as well as inherent inefficiencies in the supply chain for storing product. It also suggests poor demand planning by the retailer — all of which contribute to lower profitability, making price per unit higher not lower. Inside the store we see added problems such as increased costs to manage in-store picking and packing (added training and hiring). Add to that the cost of the tech. The pros: faster time to deliver to customers (albeit at higher expense). Grocery will most likely have a hybrid version of distributed and centralized last-mile delivery options over time that will improve in efficiency.

The idea of the local store as warehouse/fulfillment center makes tremendous sense financially and for shipping. But will an idea like this solve the customer related challenges – namely keeping BOTH online customers and in-store customers happy?

It’s hard to see success if every local retail footprint loses 10,000 to 20,000 square feet. Yet Kroger’s staff fulfilling online orders competing for aisle space with their over-sized carts have been a problem at rush hour in our local outlet on a Sunday afternoon (and they appear to have, thankfully, stopped).

I won’t predict which will work best — there are problems with every option.

Retailers are somewhat frantic in their attempt to automate the picking and delivery process to the point where a meager profit can be made, as well they should be. Using AI is a logical next step to reduce costs and enhance profit, but it has some inherently key limitations, especially in perishables. While I understand the Albertsons test is limited to a subset of items in the store in a confined area, to make this approach scalable, the robots will need to decide selection issues like the ripeness of bananas, the weight of a steak, and develop a “decision tree” process when the item ordered is out-of-stock. I have full confidence that these selection issues have been identified, but less confidence that a cogent solution has been determined. In the interim, AI sounds like a partial solution to me, but maybe that is enough to be worthy of pursuit.

Years ago, Buick had the motto “When better automobiles are built, Buick will build them.” So will it be “When stores are automated, Albertsons will automate them”? I’m having a hard time picturing it — companies run by hedge funds usually aren’t known for innovation — though I agree that a localized approach makes more sense for time critical-items like food.

But of course all this assumes online will ultimately make up a significant portion of grocery sales, which – as anyone familiar with my posts will know, I’m skeptical of. So good luck R2-D2 and friends … prove me wrong.

Retail space is typically the most expensive space available, so why would you use it to create what is effectively a dedicated online fulfillment center? If they are co-located with stores then this must either take space away from the traditional customer-facing store or they have too much space at the moment and should look at alternatives to utilize this space.

Will Albertsons move stock from store to online if they have out-of-stocks or vice versa? What if people order items that are not in stock at the fulfillment center — will they have to go to the customer store to complete the order? There are a lot of questions as to how this will operate but the main one has to be: why would you use premium space for an activity that could be located at a cheaper location … or is that just a European problem of expensive retail space?

Braintrust
" All that matters is getting customers what they want when they expect it in (for them) the least frictional way. "