Will acquiring Kroger’s c-stores be more than Casey’s can handle? 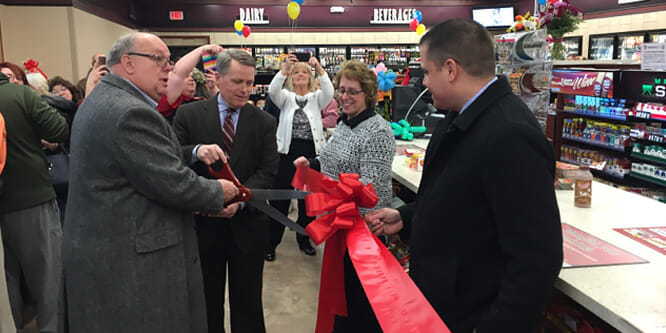 The convenience store chain, Casey’s General Stores, might soon expand its footprint through a big acquisition, even as it has been experiencing pressure from investors to sell off its operations entirely.

Casey’s has put in a bid on 783 of Kroger’s convenience stores, according to the Des Moines Register, a significantly larger acquisition than any other the company has yet pursued. The chain’s largest single acquisition so far consisted of between 55 and 60 locations (all of which are now Casey’s-branded convenience stores). Casey’s currently operates more than 2,000 stores in 15 states.

In December, a group of Casey’s investors urged the company to sell the entire c-store chain, according to an earlier Register article. The group cited Casey’s rapid expansion coupled with apparent declining ROI as an indication that the company was unable to manage growth effectively. It also noted declining same-store sales and bloated operational expenses. At the time, CEO Terry Handley said that the store was focused on generating shareholder value through increasing same-store growth.

Despite the concerns over managing expansion expressed by investors, analyst Brittain Ladd, quoted in the Register’s account of the acquisition bid, said that the aforementioned investor pressures are the driving force behind the move. Mr. Ladd saw it as part of Casey’s strategy to reduce costs and complexity, increase market share and improve the chain’s competitive position.

The question of who will pick up Kroger’s convenience stores has been a point of speculation since last October, when Kroger first began discussing the possibility of selling off its stores to a company more focused on the c-store space. Kroger operates convenience stores under the monikers KwikShop, Loaf ‘N Jug, QuickStop, Tom Thumb and Turkey Hill Minit Markets in 18 states.

Among others, big names such as 7-Eleven and Canadian chain Couche-Tard were floated by CSP Daily as likely suitors for the Kroger convenience stores.

But 7-Eleven’s most recent big, footprint-boosting acquisition instead came with the purchase of 1,030 convenience stores owned by Sunoco across 17 states. The acquisition will bring the 7-Eleven’s total store count up to 9,700 throughout the U.S. and Canada.

DISCUSSION QUESTIONS: Given criticisms by investors that Casey’s General Stores has not effectively managed expansion well thus far, is acquiring 783 more stores a wise move? Will an expanded footprint improve Casey’s position competing against convenience store powers such as Couche-Tard and 7-Eleven?

Please practice The RetailWire Golden Rule when submitting your comments.
Braintrust
"Focusing on same-store growth is where their concentration should be."

"Think AND BE different! There are amazing opportunities in this space. Let’s hope Casey’s can take advantage and bust the paradigm."

7 Comments on "Will acquiring Kroger’s c-stores be more than Casey’s can handle?"

Casey’s acquiring Kroger’s convenience stores is a wise move strategically. However, adding stores isn’t enough. Casey’s must thoroughly evaluate the competitive landscape to identify how they can introduce a new business model to delight customers and gain market share.

One option I believe Casey’s should pursue is expanding the focus on groceries. I’m confident Kroger and Casey’s could collaborate on identifying ways to provide customers with an option for ordering and picking up groceries from the Casey’s store of their choice.

A more interesting option is that Casey’s would partner with Ocado or TakeOff Technologies to create new format stores that expand the assortment of products. Introducing lockers for package pickup or postal stations could also be part of a new store format. Think big. Question the status quo.

Can Casey’s absorb more stores? Yes. However, Casey’s must identify all areas of costs and inefficiency in their current state and then design a future state operating model that will assure their success.

More stores in a poor operating model could be a disaster.

Simple answer: No. The problem with many businesses today that buy other companies is they haven’t figured out that unless they are the masters of running their current operation correctly without issues, they will only inherit more problems after the purchase. Businesses have made this mistake too many times. Then the company winds up closing stores or going out of business. If Casey’s had several successful quarters of growth, had high customer satisfaction scores and they could show great success with the other acquisitions they’ve made, then yes they should purchase the Kroger stores. Terry Handley’s comment about focusing on same-store growth is correct and where their concentration should be. Figure that out, perfect it and then acquisitions will not only make sense but you’ll be able to make them be successful investments.

I’m starting to think this is another set up for failure similar to the Haggen-Albertsons deal. Casey’s falls in the mediocre category of c-stores. Acquiring a group of stores that a successful company like Kroger doesn’t want is a big red flag.

I have received several questions on the topic of why Kroger wants to sell their stores.

Kroger should contract a strategy firm to help them identify operational and growth strategies. I am on the record as stating I believe Kroger should evaluate acquiring Speedway or Casey’s General Stores depending on optimal strategy that is identified.

M&A can be strategic but operational excellence and execution are must-haves.

I suggested something like this spurred on by a previous RetailWire discussion, and wrote about it here.

The lines of demarcation between grocery, retail and restaurants have been blurring for some time as an effect of digital transformations. Last year’s Amazon acquisition of Whole Foods obliterated those lines. Add Amazon Go into that mix and you have the future of brick-and-mortar — today! Casey’s has a wonderful opportunity to become innovative and redefine itself and recast its brand. Think AND BE different! There are amazing opportunities in this space. Let’s hope Casey’s can take advantage and bust the paradigm.

I think it is a smart move by Casey’s, as it will allow them to spread their administrative and operational costs across more stores to reduce the overall overhead per store. With more stores, it may also give them more buying power to achieve better pricing from suppliers. While these operational efficiencies driven by increased size are helpful, they will need more changes to be successful. Casey’s has a great niche in the markets it serves and certainly has the vision for the future based upon our experience with the chain. This move signals “game on” for Casey’s.

Braintrust
"Focusing on same-store growth is where their concentration should be."

"Think AND BE different! There are amazing opportunities in this space. Let’s hope Casey’s can take advantage and bust the paradigm."