Will a trip to the doctor soon mean a trip to CVS? 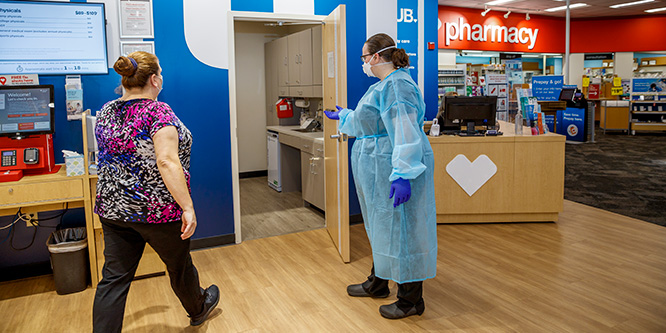 Customers already visit CVS for vaccinations, prescriptions and to take care of a range of other pharmacy-related errands. If the chain is successful with its latest initiative, customers will be going there for full primary care visits as well.

CVS plans to get primary care doctors on its payroll in its ongoing pursuit of becoming a major healthcare provider, according to The Wall Street Journal. CVS CEO Karen Lynch said in an interview with the Journal that the retailer is working with “speed and urgency” to create physician-staffed practices. CVS will also have primary care physicians in mind as it pursues acquisitions in the coming years.

The planned move by the retailer builds on its nurse practitioner-centered care at its in-store Minute Clinic locations while further amping up its healthcare initiatives that included being the first major pharmacy chain to end the sale of tobacco products.

CVS, which acquired insurance provider Aetna in 2018, has also experimented with new modes for meeting customer healthcare needs, such as telemedicine. It has also been piloting new healthcare services, such as in-store mental health services at locations in three states with plans to expand beyond that.

CVS is not the only retail pharmacy trying to become more like a doctor’s office.

In October, Walgreens Boots Alliance’s new CEO announced that the chain would convert U.S. locations into places where people could visit the doctor, get medical tests done or get advice from other medical professionals, according to CNBC. The stores will operate under the new Walgreens Health banner. Walgreens has also undertaken its own slew of healthcare-related acquisitions, including a primary care company called VillageMD.

Brick-and-mortar pharmacy retail has been racing to differentiate itself since the threat of competition from Amazon.com has grown into a perennial concern.

An anonymously sourced Insider article this spring claimed that the e-tail juggernaut is considering placing pharmacies inside Whole Foods locations or even launching standalone pharmacies. At the time of that speculation, Walgreens, CVS and Rite-Aid all saw their stocks fall between three and four points.

DISCUSSION QUESTIONS: Do you see large numbers of Americans eventually having their primary care needs met in retail pharmacies? How do you see the increased emphasis on healthcare services affecting the front end operations of drugstores?

Please practice The RetailWire Golden Rule when submitting your comments.
Braintrust
"I see retailing playing a significant role in the future delivery of medical services."

"Finding ways around current regulatory constraints with data meshing and security is the key."

"Eventually, we will all only have a three block radius for finding primary care physicians, and they will both be at either a CVS or a Walgreens."

15 Comments on "Will a trip to the doctor soon mean a trip to CVS?"

I see retailing playing a significant role in the future delivery of medical services. This is already an important trend and it appears to be accelerating as retailers jostle for positioning in this huge and lucrative market. Retailers who pursue the medical services business will need to be mindful of store layout and design in order to create an environment that is both shopper and patient friendly.

The big stumbling block is not going to be store layouts or logistics, but rather the pipeline of staff (even after the pandemic has passed.) Not every position in this scenario needs a full-on medical degree, but there aren’t nearly enough pharmacists and nurse-practitioners coming through each year to keep current storefronts and clinics adequately staffed. Much less the general MDs like these locations will need. They’re essential and fulfilling jobs that pay well, but retailers are going to have to incentivize and equip the training pipeline all the way down into high school.

Good points Scott. It may not be economical for each store to staff a physician or nurse practitioner. An alternative my be offering private booths were customers/patients could consult with a physician via a telehealth virtual video conference. With this model, several stores could share a physician or a pool of physicians.

Funny you should ask as we were just discussing this yesterday: think of LensCrafters — they have a doctor in the house, then you (hopefully) buy lenses and frames from them at high margins. So why can’t CVS pull that off? The model works, obviously, or Luxottica would not have bought LensCrafters. However can CVS, a giant hairball of a company, actually execute something like the LensCrafters model? Without a doubt they should test this ASAP and probably should’ve tested it a long time ago but, again, the rollout for them is the key — it’s not even close to easy. A well executed test should inform them if it’s worth it/possible.

Since it figured out that it could be a health provider and not just a “drugstore,” CVS has made a series of very smart moves that leverage its reputation and ubiquitous stores. After adding primary care to stores, look for CVS to add telemedicine to address more specialized conditions. The future looks very bright.

Walmart, CVS, Walgreens Boots, and others wouldn’t be attacking health services unless the data pointed to a mega opportunity. All three are addressing voids in current healthcare systems and consumers are the ultimate winners. The furious competition will lower prices and expand the number of services provided as retailers attempt to grab bigger pieces of the pie. All three retailers have the deep pockets required to invest in store remodels and training programs that will be critical to success. Most are reworking store design anyway to facilitate clicks-to-bricks shopping. Services and solutions of all kinds are in now the mix.

CVS, Walgreens, and other pharmacies are natural places to get primary care. An estimated one-third of the workforce in the U.S. is in a gig economy position, and they don’t get any health benefits. This will make a tangible difference to people without conventional employer-backed insurance, or those with very high deductibles. And it reduces pressure on emergency rooms and hospitals. It’s a win for retailers too with better usage of their facilities and customer stickiness/loyalty.

I believe this is an evolution for both CVS and Walgreens. It isn’t enough just to have a CVS and a Walgreens facing off at each other on every intersection as pharmacy/c-stores. They also have to be competing head-to-head as doctor’s offices. They already provide the vaccine services previously done only in-office and I feel they care more about my well-being than anyone other than my spouse. They certainly have the data on what I take from the prescription side, my over-the-counter purchases and even my snack food preferences. They can mine this data to make me more healthy. (Maybe minus the snack food part.)

Another thing to consider is how incredibly geography-based healthcare plans have become. Every year, the provider network shrinks. Eventually, we will all only have a three block radius for finding primary care physicians, and they will both be at either a CVS or a Walgreens.

CVS has a sound strategy to become a health care provider – and it is making smart moves to occupy that space.

In terms of primary care needs, I see CVS competing against Urgent Care Clinics. But CVS will win that battle because they have the advantage of a fully stocked pharmacy, numerous other pick-up item categories, a strong loyalty card program, and convenient locations. It’s a prescription for success.

CVS is currently a place where many people get the flu vaccination, COVID-19 vaccination, and other vaccinations. I am not familiar with its MinuteClinic offer but see this as a logical extension of its current medical offer. It is likely to have its best success in areas that are not well served by other medical professionals. A target market would be people who do not already have a primary care doctor or people who are not part of a healthcare group that offers a wide range of services.

CVS MinuteClinics and pharmacies are already the go-to destination for many. Adding physicians makes perfect sense and satisfies a need that the healthcare industry has been unable to satisfy.

The trend to have additional medical services being offered by retail pharmacies will only accelerate as U.S. medical costs continue to soar. If the average consumer can get a shot, engage with a physician and leverage health services at their local retail pharmacy for much less than a traditional doctor’s office visit, who wouldn’t like that value prop? All signs point to incredible growth and differentiated services being offered by many including Best Buy, CVS, Walgreens, Walmart, Amazon and Rite-Aid. Furthermore I’d submit that one of the biggest opportunities for all of these enterprises is combining front of store and back of store (Rx operations, inclusive of newly offered health services) data to deliver rich insights and offers that compel consumers to increase basket sizes and frequency of visits. Finding ways around current regulatory constraints with data meshing and security is the key.

About 40 percent of Americans report skipping a recommended medical test or treatment and 44 percent say they didn’t go to a doctor when they were sick or injured in the last year because of cost, difficulty or distance.

If CVS and others are able to eliminate those hurdles we will simply be a heathier country with better and cheaper positive outcomes.

I see this as a win-win for pharmacies and customers and I am glad to see the trend is expanding. To be able to receive a simple flu shot, or get a pulled muscle looked at in a location close to your home and get medicine to relieve it is very convenient to the family on the go.

Primary care is now the battleground for the healthcare consumer, with both ends of the service continuum coming to the center — at the left side of a continuum are inpatient hospitals and health systems along with “payviders,” many of whom financially suffered during COVID-19 (particularly those who did not yet embrace value-based payments). At the other end are the retail health and virtual care providers, from CVS Health and Walgreens to Teladoc and Amwell, who are moving to more acute, chronic care and population health models. So yes — retail pharmacies will be in this ecosystem — but it will be an omni-channel, multi-player ecosystem. And data — especially for those who can corral data from claims to pharmacy to patient-generated data via wearable tech and social drivers of health — will be key to managing health with people and, at the same time, managing healthy financial sustainability. JSK

Braintrust
"I see retailing playing a significant role in the future delivery of medical services."

"Finding ways around current regulatory constraints with data meshing and security is the key."

"Eventually, we will all only have a three block radius for finding primary care physicians, and they will both be at either a CVS or a Walgreens."