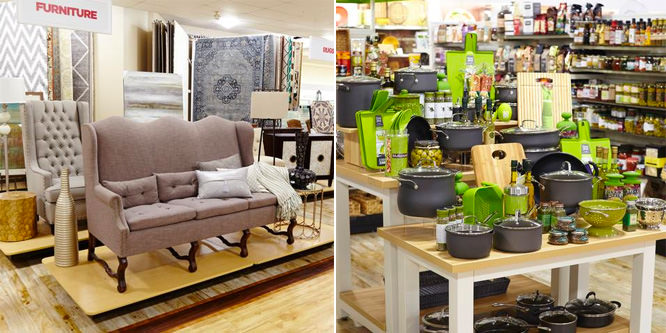 While not revealing the name of the business, TJX CEO Ernie Herrman told analysts on yesterday’s earnings call that the new stores will not compete directly with HomeGoods.

“Our approach will be to differentiate these two U.S. home concepts to encourage customers to shop both stores, which has been key to our successful growth at T.J. Maxx and Marshalls in the U.S. and Winners and Marshalls in Canada,” he said (via Seeking Alpha).

“We plan to leverage our existing distribution centers, supply chain and buying organization, which is similar to what we did when we launched Marshalls in Canada,” said Mr. Herrman. “While we are proud to have grown HomeGoods’ customer base for many years, we believe we remain significantly underpenetrated in the total U.S. home market and enormous opportunity remains for us to gain share in this space.”

Mr. Herrman said the company plans to open four of the new concept stores this year. He told analysts that TJX has been testing many of the home categories that it plans to sell in the new stores for the last year-and-a-half. The company has “a high degree of confidence on what the store can do for business when it starts up later on this year,” he said.

Same-store sales at HomeGoods, which has more than 570 stores in the U.S., increased five percent in the fourth quarter on top of a seven percent increase posed in the same quarter a year earlier.

DISCUSSION QUESTIONS: How do you explain the popularity of the various TJX chains? Do you think the company can successfully operate two different home goods chains in the U.S.?

Please practice The RetailWire Golden Rule when submitting your comments.
Braintrust
"It's not department stores that should be worried, it's full-priced traditional furniture stores."

"TJX understands the entertainment factor in retail — the surprise of discovering something you wanted but never knew you needed."

"To me, it doesn’t make sense to add a new off-price home goods store to compete with HomeGoods. What’s the appeal in creating a new brand?"

15 Comments on "Will a new TJX concept put more hurt on department stores?"

People love to hunt for bargains and TJX’s growth and results are a testament to this. At first blush, it’s reasonable to question the move of launching another home goods chain, but given the success TJX has had in bringing similar concepts to market successfully, I wouldn’t bet against them.

TJX understands the entertainment factor in retail — the surprise of discovering something you wanted but never knew you needed.

I can’t think of too many things they have done wrong as a brand.

If they bring that same discipline to the new concept they will succeed. At least until online takes everyone’s business away.

TJX has curated a really nice mix of name brands and alternatives at price points that consumers accept, while being very successful at creating their own brand perception as discount/value retailers. That’s further bolstered by the quasi-bargain hunting experience due to what (I believe) is often limited inventory for many items. So shoppers fall into the hunt mentality and gamesmanship (fun!) of being in a physical store and discovering that thing or clothing item at a reasonable cost.

Contrast that with department stores that are largely fancified warehouses of rack after rack after rack of merchandise, often at premium prices, and it’s easy to recognize TJX’s intrigue.

The key to TJX’s success is their merchants. They are constantly on the hunt for high-value, on-trend, opportunistic buys. This creates the treasure hunt, and a compelling reason to shop … frequently. I think TJX will launch a full assortment off-price furniture chain, instead of it just being a department in HomeGoods. It’s not department stores that should be worried, it’s full-priced traditional furniture stores who should keep their eyes wide open.

Success for TJX here boils down to merchandise mix. They’ve proven success in apparel with two brands that largely do not compete with each other but, collectively, with larger brands — and they do it well. Shoppers love a bargain, and we’ve seen with younger generations (Millennials and Generation Z) less affinity for big designer brands. This has led to more willingness to shop at off-price stores (just look at Nordstrom Rack, Saks Off 5th and Neiman’s Last Call for more examples) in hopes of uncovering a great deal that is independent of designer brand. In the home furnishings categories there is certainly room for more stores. Home goods today may seem more like a home furnishings category while other brands focus more on either larger items and furniture (think Lamps Plus) or incorporate unique food items (say, World Market) so that you could easily see TJX bring new categories into the mix with a second store brand. I suspect we’ll see shoppers posting to their Instagram accounts about a great find at HomeGoods followed… Read more »
1
|
0
-   Share

I’m lucky enough to live in an area that has a Marshall’s and a TJMaxx. The merchandise is consistently interesting and compelling — I just bought a $370 Tory Burch top for $20 — and the store is always hopping, despite competition from Neiman Marcus and Saks nearby. This company knows how to merchandise … any new concept they introduce will be a hit.

TJX is pushing all the right buttons for their shoppers. Their stores and assortments are fresh, inviting, surprising and full of quality name-brand values. They’re easier to shop (and park) and each trip brings with it something new. This lively and dynamic format contrasts with a department store format perceived as old and staid.

As long as TJX can properly differentiate the two formats and provide the right buying and merchandising support, they’ll have a good chance to make them successful.

This is big news here in the southeast, home to many furnishings stores and even home improvement giants Lowe’s and Home Depot. Department stores are not going to be the only victims of this new TJX strategy. I can’t tell you how many people I know who make HomeGoods their first stop for all home-oriented needs, and who browse weekly just to see what treasure may be lurking within. These shoppers (including “ShoppperAnnie” herself) are loyal to a fault!

People love a good bargain and they love a good hunt. It’s all about the experience and this brand is giving it to them. Will this compete with department stores? Not so much. Will it compete with their own brand? Yes. That is what I don’t get about this move. But the jury is out and I’m willing to see what they come up with.

The twist on omnichannel that offers more physical browse/buy options rather than just widening existing customer paths to purchase recognizes the importance of the shopping experience as outing, browsing and discovery. Bravo for the real retailer blood that courses through your TJX veins!

The off-price category has been the hottest retail segment for several years. Today’s consumers are shopping discount brands and fast fashion retailers because they don’t want to spend $200 on a sweater when they can get a similar one for $20 and wear it a few times and get a different style or color next month. Many affluent Millennials and Baby Boomers are choosing to save money on consumables and apparel so they can splurge on experiences and big-ticket items.

This all bodes well for TJX’s off-price brands and it has translated into stellar financial performance for the company.

TJX is an extremely savvy company and they have figured out how to successfully run two competing off-price apparel chains. I am confident that they will be successful with two home goods chains. One thing that makes off-price home goods attractive is that it appears to be a less crowded space than off-price apparel.

I agree with all of the comments made on TJX’s great merchandising, the gamesmanship involved in bargain hunting and the Millennial generation’s focus on finding great deals. One thing I’d point out is that I don’t think TJX is the problem for traditional department stores but, rather, department stores’ own poor merchant planning and the heavy discounting that results. Department stores notoriously overbuy which causes them to then steeply discount the products they sell. Consumers are conditioned to eventually expect a markdown if they just wait. There’s very little incentive to pay full price. I’d also argue that it really depends on the department store — they need to have an understanding of who their customer is and what they are coming in for. Are they looking for an indulgent day of lunch and shopping, or simply a bargain hunt? If your store wants to cater to the former, then thinking about how to attract that right customer is critical.

Off-price merchandise is hitting it big right now, as we all agree. People love a bargain and the thrill of the find that comes with shopping at TJX. These types of stores create that exciting shopping experience many retailers are after.

However, this particular move by TJX doesn’t seem to add up. I never realized until reading this article that there was some type of product differentiation between T.J. Maxx and Marshalls as Mr. Herrman’s quotes imply. I always thought of the two stores as being essentially the same thing, and people chose one over the other based on proximity.

To me, it doesn’t make sense to add a new off-price home goods store to compete with HomeGoods. What’s the appeal in creating a new brand versus expanding on the one they already have?

I don’t think it’s a question of “can” as much as “why.” Unless the operations are very different from one another on price point, selection of goods, etc., what is the point? It’s not like we’re talking about buying some existing store and maintaining the name because of legacy value.

But whatever the future may hold, why are they successful now? Obviously because they sell what people want. I think they also benefitted enormously from changing fashions, or more precisely the decline of what used to be called “fashion.” If there’s no specific way people are “supposed” to look, then there’s no point in paying a lot to dress. They didn’t invent this shift, but they’ve been adept at exploiting it.

There will never be a shortage of customers when there are places like TJX that give you quality merchandise at discounted prices.

Braintrust
"It's not department stores that should be worried, it's full-priced traditional furniture stores."

"TJX understands the entertainment factor in retail — the surprise of discovering something you wanted but never knew you needed."

"To me, it doesn’t make sense to add a new off-price home goods store to compete with HomeGoods. What’s the appeal in creating a new brand?"