Why is social media not working for customer service? 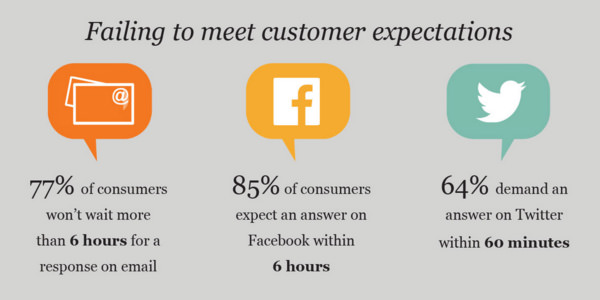 Despite promises to eliminate long waits on hold and speed consumers to empowered associates, the use of social media to handle customer service issues remains stubbornly ineffective for most retailers.

Retailers also responded over three times faster to email queries on average than social media. The average response time to email was seven hours and 51 minutes versus 27 hours on average for Facebook and 31 hours for Twitter.

A fourth option, web chat, was fast (on average taking four minutes and 28 seconds for retailer responses) but only 35 percent of retailers were able to address concerns in this fashion.

Regardless of the challenges, being able to respond to service issues via social media has become an expectation. A corresponding survey by Eptica of 1,000 consumers showed consumers expect much faster responses across communication paths.

The most recent Sprout Social Index — based on aggregating and analyzing public Twitter and Facebook social profile data between Q3 2014 and Q3 2015 — also found that this holiday season, the average retailer can expect more than 1,500 inbound social messages, a nearly 20 percent jump from the 2014 holiday period.

On the positive side, other surveys point to how a quick and effective resolution to a customer service issue via social media can boost word-of-mouth and engender loyalty with customers. On the riskier side, many social media queries are on public display and can trigger more complaints if resolutions don’t go well.

According to articles on Forbes and Entrepreneur, some tips around using social media for customer service resolutions include:

Please practice The RetailWire Golden Rule when submitting your comments.
Braintrust
"Until retailers understand that social media is an integral part of today’s consumers’ lives and experience, retailers’ use of social media for service will be woefully inadequate."

16 Comments on "Why is social media not working for customer service?"

Until retailers understand that social media is an integral part of today’s consumers’ lives and experience, retailers’ use of social media for service will be woefully inadequate.

It’s not that Facebook and Twitter have not fulfilled their promises as tools to resolve customer service issues, it’s about retailers commitment to use the technologies. If retailers allocate the necessary resources, Facebook and Twitter can be excellent tools. It’s all about economics — the cost of handling a customer inquiry.

By adding social media to your store’s platform, a person or people need to be added to the response team, and even though we are a small store we try to respond to inquires or comments within the same day or even quicker. Consumers are very fickle,and all of the efforts made inside the store will be forgotten if the customer is ignored online. It is kind of like some NASA employee in charge of keeping an eye out for asteroids that might hit earth because it requires a constant effort to stay ahead of the game. Are stores willing to invest in this properly? If so, it can really help the image of your program. Try calling any big company today and it takes 20 minutes to hit all the buttons to speak to someone who knows nothing. This has bugged me for years, and now we are adding an even bigger social media to these companies. You wonder why customers get angry, since stores were very poor at service before Facebook, and Twitter.… Read more »
0
|
0
-   Share

Social media is a work in progress when we speak of customer service. Just like every other start up in retail, it takes time. Retail is a field that has to be shown something can work efficiently. Retail is not an innovative field. Over time and with effective training this will work. Retail will reach a sense of urgency. But it will be over time. Once an innovative leader is placed in the right position, we will see social media in retail working efficiently.

The Human condition is such that when consumers are seeking a solution to their problem, they want it taken care of in an expeditious manner. Their preference is that the issue be resolved by the first, or at least the second person with whom they come into contact, either by telephone, digitally or in person.

Many social media forms are not positioned to make those accommodations in that manner. Facebook, Twitter and others have to build the engineering in the same fashion as they are with their web searches and apps. Don’t start with the finicky tools of the computer. Start with the finicky minds of each of us — the consumer. How do we want to solve our issues of customer service?

The reasons for their lack of success have been well noted in this article and the accompanying references. The key to success revolves around the customer’s expectation of a personalized, quick response from companies. The genie is out of the bottle regarding social media expectations. With proper funding, staffing and training all of the issues noted herein can, and more than likely will, be addressed by organizations investing in social media as a two-way dialog with customers.

Most of us use these two social media sites just to communicate with friends and relatives and see the rest of it as a commercial. The commercial side of it gets in the way and we just skip over most of it. We still prefer to go to a store, and a growing number of us will go to the retailer’s website for more correspondence with the retailer rather than on Facebook.

Retailers can’t be at the mercy of every new social media outlet that comes along. By all means, set up intelligent autoresponders directing customers to the preferred CS mechanism, maybe provide a ticketed incentive to compensate them for any inconvenience, and make visible to others the accelerated path to a resolution. In other words, use these miscellaneous outlets to train your customers.

Of course, it follows that your chosen mechanism will be one-stop, and staffed with qualified personnel who can take care of the customer while online.

Support in social media has a psychological barrier. It’s a public medium. There is a fear of sounding stupid, having your problems on the Internet, etc. It’s not a great support medium. However, retailers should monitor and support disgruntled customers on social media because that is often the place to go to complain. These cases can benefit the retailer greatly, as it was pointed out in this article, by responding in a timely manner to resolve or respond to concerns.

Over the arc of history, we can see moments when technology advanced and caused a backlash among those who decried the loss of humanity in everyday life. Didn’t stop massive factories, light bulbs or inhibit the adoption of the internal combustion engine, but some folks got cranky.

Now we see the backlash.

Food: Local, organic, vegetarian, et al.
Music: No longer one stage, but multiples of stages for “curated sound”
News: No longer 4 networks, but a long tail of opinion, offering a voice that sounds familiar.

Smartphones will not go away. Newspapers won’t reemerge.

But when something bad happens, we crave a human touch. Even if Amazon misses Prime 2-day delivery on my last 3 orders. I prefer to speak to a person and understand why, and they resolved my issue. Each time it was a different solution. All equally big data, generic.

Twitter and Facebook are tools but like most tools, it’s how they’re used and who is using them. This goes back to how brands are (or are not) committed to customers and customer experience.

The biggest issue is deciding to participate on these channels. Next would be the response time to time sensitive issues.

I could say that people most likely to use social media for complaint resolution are the same self-absorbed people who think the world stops for…yeah, let’s leave it there, but turn it into an algorithm: unrealistic expectations + overworked/under-qualified support staff = little improvement in customer service.

Pointing a finger at social media avoids having to do so at the consumer-facing industries like retail.

In the old paradigm, retailers dictated the customer service process, the operating hours, the nefarious call center phone menu options, the mandatory RA numbers, and so on. Today’s technology has shifted the action initiative to the consumer and social media exacerbates that with consumer-level expectation of immediate response.

The times they are a-changin’ … and there’s a lot of catching up to be done out there.

I think the size of a company and, in conjunction with that, the overall level of control a person responding to the Facebook messages has, plays a big part in determining how successfully a business can use Facebook for CS purposes. I know small mom-and-pop retailers in niche areas (used books, records, etc.). The owners are solely responsible for the product assortment, curate the selection and have a great deal of personal knowledge of what their customers want, and they personally handle their social media. They use social media with incredible success when it comes to reacting to customer service inquiries (as well as for promotional purposes). A challenge it would seem that bigger/big box retailers face is that customer service reps have to appear to engage in a personal two-way dialogue with customers, but at the end of the day don’t have the kind of leeway a small retailer has when it comes taking steps to resolve an inquiry — or even leeway in diverging from the brand’s voice/message to answer a question to a… Read more »
0
|
0
-   Share

This is an age-old issue. Customer service is important on every channel that customers use. Social media has thrown a wrench into the mix and the reality is that many companies just simply haven’t mastered social customer service just yet (not enough resources devoted, training, etc).

We all know that Tony is correct — it’s terrible to wait a long time to talk with a customer service representative that might not even be able to resolve the issue at hand. Facebook and Twitter are two of the newest forms of customer service and they’re experiencing some hiccups as well. Just like with omnichannel selling, the retailers that are able to meet shoppers with a positive experience on whichever channels they prefer are the ones that will win the most sales and loyalty.

Braintrust
"Until retailers understand that social media is an integral part of today’s consumers’ lives and experience, retailers’ use of social media for service will be woefully inadequate."