Why did Bon-Ton fail while Macy’s did not? 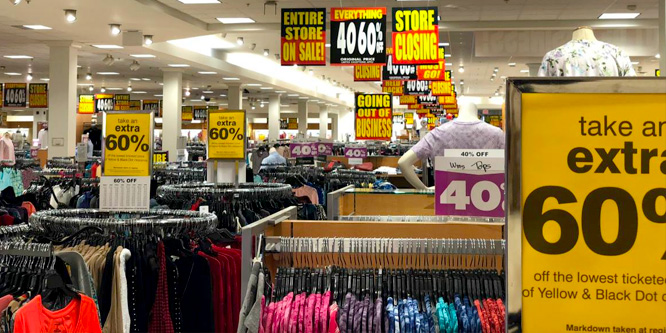 Through a special arrangement, what follows is a summary of an article from COLLOQUY, provider of loyalty-marketing publishing, education and research since 1990.

Many factors played into the demise of Bon-Ton Stores, but its turning point may have been in 2005, when it acquired Saks’ Northern Department Store Group. But Macy’s made its own risky move that year when it bought May Department Stores, cementing itself as the nation’s largest traditional department store chain.

What caused their paths to diverge since the mergers?

Macy’s in August 2016 announced plans to close 100 locations and still might not have skirted all the challenges its operations brought with the May acquisition, despite its recent improvement. The next chapter may reveal just how resilient century-old retailers can be in finding their paths to success.

DISCUSSION QUESTIONS:  Does Bon Ton’s smaller size, failure to consolidate banners, market focus, private label lineup or other factor stand out as most responsible for its demise? What lessons do you take from the merger of Macy’s and May versus Bon-Ton and Saks’ Northern Department Store Group?

Please practice The RetailWire Golden Rule when submitting your comments.
Braintrust
"One key lesson: The merger of two strong players will almost always work better than the combination of weaker stores. "

"Alignment of identities to establish the merged brand persona too often results in the benefits of a merger not being realized quickly and easily."

"Whoever you are, as a retailer you should never acquire more than you can manage."

16 Comments on "Why did Bon-Ton fail while Macy’s did not? "

One key lesson: The merger of two strong players will almost always work better than the combination of weaker stores. The Macy’s-May deal included the market share leader in almost every major city in the country, even though Macy’s was criticized at the time for changing the nameplates of chains like Marshall Field’s and Famous-Barr. Meanwhile, Bon-Ton’s acquisition of stores like Carson’s and Younkers (and then choosing to maintain “local” identities) was saddled by debt and by the lack of national scale or brand equity.

Milwaukee (where I live) is one of Bon-Ton’s two “headquarters” cities, and the home of its Boston Store nameplate. As an observer, I find the CEO revolving door was an issue and the company’s slow pace of e-commerce development (compared to Macy’s and Kohl’s) didn’t help either. And as a shopper, Boston Store’s content seemed overly focused on “career” Boomers who are retiring from the workforce, without a strategy to replace them with goods for younger customers.

Alignment of identities to establish the merged brand persona too often results in the benefits of a merger not being realized quickly and easily. The integration of operations, supplier engagement policies, marketing campaigns and operating systems require outstanding leadership skills, and the priority must be on business building through the merger while operating efficiencies are being activated.

I think there are a lot of assumption at work here. I could make an argument that Bon-Ton’s smaller size and position in secondary markets could have been an advantage. If you are in a primary market you have a lot of competition. I live in the Detroit area for example and can’t imagine why I would go to Macy’s which I find to be loaded with private label, disorganized, under-staffed and fairly poorly merchandised compared with other equally accessible options. Now if I were in a small town, and they were the only game in town, I might shop there more often. Business failure is generally the result of the interaction of multiple factors, the most significant of which is losing touch with a scalable, addressable consumer segment. As to the second question I guess the takeaways are that scale alone will get you through the short term — but I’m still not bullish about Macy’s long-term fortunes, absent a significant turnaround. Whoever you are, as a retailer you should never acquire more than… Read more »
3
|
0
-   Share

Let’s remember the skill sets of the institutions that were cobbled together to form what we now know as Macy’s (“Federated Renamed,” as I think of it). The simple version of the equation is “Federated + Macy’s + May Co. = Macy’s” as we know it today. Federated was very disciplined. Macy’s bordered on being out of control. (I worked for both.) Macy’s was the better merchant and great at marketing. Federated + Macy’s was a great combination of strengths. Adding May Co., another disciplined business, made sense (sort of). Yeah, I was horrified to see Bullock’s disappear, but times were changing and a national chain was born. Only now is it remembering that regional and local sensibilities are important. The key was that complimentary strengths were the basis of a lasting marriage.

The primary contributor to the demise of Bon-Ton was its excessive debt, similar to Toys “R” Us. When cash is stressed by big debt loads, it is hard to dig out of the hole.

The big difference between the merger of Macy’s and May versus Bon-Ton and Saks is the amount of debt that Bon-Ton leveraged for the acquisition. While Bon-Ton probably felt it needed to scale to a national brand to compete with its rivals, they were too aggressive.

While Bon-Ton may have other issues that contributed to their failure, in the end, it was the debt that killed them. Cash is King!

I’m with David. Debt was the biggest weight dragging down Bon-Ton. Instead of making the investments it needed to connect with customers, it was trying to pay off its loans.

They had just finished the remodel of their flagship Herberger’s store here in the Twin Cities at Rosedale Mall — it’ll be a glorious space for Nordstrom, I hope. But the updates should have been done five years ago, and the remodel itself was drawn out over several seasons, no doubt due to cash flow concerns.

Absolutely! I’m incredulous that excessive debt was not even one of the options.

Having been intimately involved in every deal that the May Department Stores did from the Associated Dry Goods acquisition through the sale to Federated (Macy’s), I have a thought about why the Macy’s/May deal worked and the Bon-Ton/Saks Northern deal did not. First and foremost, Bon-Ton took on way too much debt in their deal, Macy’s did not. Second, we (May) looked at every one of those stores that became part of Saks Northern and we allowed ourselves to be outbid (by Brad Martin) on each and every one of them, because we thought, in general, that they were “bad businesses” that would require a lot of “rationalization” (store closures, etc) in order to be viable. So, Bon-Ton bought “problem children” and Macy did not. Finally, Macy’s had a much stronger management team than Bon-Ton. And, the team Macy’s bought was much stronger than the management team that Bon-Ton bought.

So, in summary, other than both being department store deals, the two deals bore no resemblance to each other. No wonder the outcomes were different.

All true, Jan. You studied these stores with the eyes of a potential buyer, and I looked at them as a competitor while working at Kohl’s. They were slow to embrace change — whether making the investment in e-commerce or making the tough call to go to one nameplate. They became “your mother’s department store,” which is not a good brand position to own.

WOW! Insight right from the source. Thank You. Would love to “have lunch with you sometime” and hear about those amazing times!

Curiously missing from all this is the issue of debt: although Bon-Ton likely would have failed eventually, the immediate cause of its failure was an inability to make payments.

Beyond that … well, pretty much everything (except “label consolidation,” which was actually something BT had practiced with zeal in its earlier days, but would have made little sense with better known names like Carsons and Younkers). The ever quotable Howard Davidowitz once made a remark to the effect that “They run stores in the sticks … and they run them badly.” Though I don’t know enough about management to comment further, operating small stores in struggling second (and third-… and “n”th) tier markets is about as difficult a task as I can imagine in retail.

Many of the “stores in the sticks” had very little overhead. So in reality, while they may have been over spaced, they may have also have been profitable, although not worthy of a remodel or what it took to be “well run.” Regardless, these were often mainstays in these communities.

I AGREE with Mr. Naumann and Mr. Sundstrom — debt killed Bon-Ton. I am afraid to say that I believe Bon-Ton was doomed, but the debt burden hastened the inevitable. Also the two combos are so different. Macy’s (Federated morph) and May were the majors combining and adding incredible management teams and some amazing location opportunities. Bon-Ton Saks Northern group was a combo of potential difficulties. This actually might have worked because in reality, a lot of Bon-Tons were in underserved locations and without the debt service, maybe it would have worked. The two mergers, however, are very, very different. Perhaps Bon-Ton didn’t feel that they had a choice given the pressures for size and scale, but they were unable to take full advantage of their increased size. Still I believe a lot of that has to deal with the debt (that at times, and in the end, must have loomed large, and did, like a large brick wall casting shadows before it falls). Also as noted, Goliath bought David. I always thought it was… Read more »
1
|
0
-   Share

Like so many failures in M&A, the Bon-Ton deal was doomed from the start by outsized debt and post-merger financial expectations. The idea and previous success of a “local department store” in 2nd tier markets could have continued to play well without the debt servicing burden that stripped away management’s ability to invest in the customer, the product and the facilities. When any retailer fails to invest in those 3 areas, they die.

Macy’s continues to invest in all 3, although not as well as I’d like in the facilities portion. It remains to be seen if long term, they can be financially sustainable given their own debt burdens and often unrealistic market expectations on growth and short term profitability.

I’m shocked that one of the options wasn’t that they had an overleveraged buyout. Pure and simple. Bon-Ton had good merchants. They had many excellent locations. They had brand loyalty in their markets due to retaining the home town retailer’s name. When your interest payments are overwhelming in a weak market, there’s no way to battle your way out of the paper bag. Plain and simple. For transparency sake, I was a 19 year employee, gone for 15. I’m still devastated by the loss of jobs for so many of my former co-workers.

Braintrust
"One key lesson: The merger of two strong players will almost always work better than the combination of weaker stores. "

"Alignment of identities to establish the merged brand persona too often results in the benefits of a merger not being realized quickly and easily."

"Whoever you are, as a retailer you should never acquire more than you can manage."