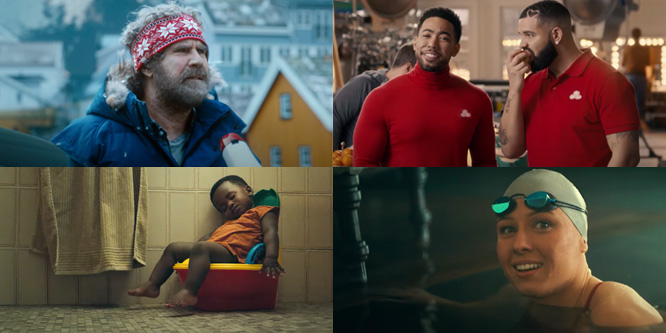 There was a lot that was different about this year’s Super Bowl due almost entirely to the novel coronavirus pandemic that continues to disrupt the business of America, with its sports being no exception. The game was, in a word, boring. That is unless you’re a Tom Brady or Tampa Bay Buccaneer fan.

If you’re one of the millions who had little interest in the game but like watching the commercials, then this year was different, as well. Some of the established brands that have been part of the Super Bowl broadcast tradition decided to sit out the game. What didn’t change was that there were winners and losers among the commercial spots. Here’s what some of the Monday Morning ad quarterbacks are saying about what they saw.

GM’s “No Way Norway” stars Will Ferrell who has a real problem with the nordic country. Awkwafina and Kenan Thompson make cameos.

Yahoo Sports gave A grades to the Bud Light Lemonade, Anheuscher-Busch, Huggies and Toyota spots and added spots from Mountain Dew, other Amazon commercials, Tide and Jeep to its list.

DISCUSSION QUESTIONS: Which commercials from this year’s Super Bowl broadcast stood out for you for the most? Which one did you think was the best?

Please practice The RetailWire Golden Rule when submitting your comments.
Braintrust
"This year the commercials were a mixed bag of style, and a whole lot of missed opportunity."

"As for the half-time show: after it started, I decided that was a good time to walk my dog."

31 Comments on "Who won this year’s Super Bowl ad contest?"

Overall, I didn’t think the commercials were as entertaining this year. Maybe because some of the traditional big advertisers pulled their ads from the Super Bowl. The ad that I thought was the best was the “No Way Norway” ad by General Motors (GM). The ad’s message was strong – Norway has more electric cars per capita than the U.S. and we need to catch-up. Will Ferrell did a great job of showing the passion of GM (to quickly introduce many electric vehicles) and the humor in the ad was hilarious.

I thought “No Way Norway” was really well done and hit lots of the right notes. “Jessica Long’s Story” from Toyota was also very impactful to me. And of course, being a Boomer, I think I was pretty much obligated to like the “Wayne’s World” update for Uber Eats with Cardi B. Beginning shortly after halftime, the commercials became the only thing worth watching.

I have to admit that watching Super Bowl commercials is more of a sport for me than watching the game. This year the commercials were a mixed bag of style, and a whole lot of missed opportunity. I say that because I can’t remember which commercial belonged to which company. Indeed, for example, could have added its logo to a lower corner throughout the spot to connect with job hunters, and the Bruce Springsteen Jeep commercial touting unity might have added some people to actually unite. Reddit’s five second spot was a smart and stealthy move.

I was underwhelmed with the spots featuring Will Ferrell, Maya Rudolf and Matthew McConaughey, but I really enjoyed Cadillac’s “Scissorhands.” My favorite of the night was DoorDash’s “Neighborhood” – shoutout to shopping and eating local!

With so many spots being quite a mess in terms of what they wanted to be, my vote goes to the more normal ones. I think the Jeep, Bruce Springsteen, Let’s Grab a beer and Huggies were the best. Alexa was quite good as well.

I agree – not the best batch we’ve seen. I too loved No Way Norway because car ads are usually so boring – this one had me cracking up the whole time.

The Toyota ad with Jessica Long was the home run in our house. Two generations of adoptees made it a slam dunk.

Overall, I think companies are running out of ideas this year. I liked the Toyota commercial and the Budweiser Seltzer life gives you lemons commercial. If someone liked the Oatly oat milk commercial, let me know — the company had to be brave to do that commercial.

Will Farrell and GM took the top prize on the humor side, but Bruce Springsteen’s Jeep spot was the best overall. Of course, being from New Jersey I’m required by law to make the assessment or risk exile.

As a fellow Garden Stater, I too am oath bound to support the Boss in all things. That said, I’m never going to get used to seeing him wear a cowboy hat even though I know that there are plenty of people in New Jersey’s horse country and rural counties that wear them everyday.

As a Packer fan going back to Vince Lombardi’s teams, the State Farm spot just made me sad even though it probably was pretty funny.

Fellow Packer fan here, George. After what Brady did to the Pack and then the Chiefs, Rodgers and Mahomes may want to look for a new State Farm agent. Maybe Jake is a jinx.

I enjoyed Bruce Springsteen’s Jeep ad, “The Middle,” and that struck a chord with me. There was actually a nice balance of heartfelt, feel good messaging (Indeed, Toyota, DoorDash) and some humor (M&Ms, State Farm).

Who won? Nothing sparkled. And the big reason for these very expensive ads is recall and top-of-mind awareness. For me, they seemed so tame. I don’t recall their names. The big one was expecting was absent: I wanted another puppy rescue — what gives, Budweiser?

As the U.S. invests more in sustainability leadership, GM’s No Way Norway was fun and timely. Also, Will Ferrell copied my ‘80s hairdo, so it’s a personal favorite.

Rocket Mortgage’s Pretty Sure ad earned howls for its absurdity, as did Dr. Squatch for making natural products macho.

Every parent is buying a Toyota today after the moving Jessica Long ad about unconditional love and resilience. Its distinct tone and powerful storytelling made it the winner.

I make it an article of faith never to watch the Super Bowl. I know that’s unAmerican, but that’s the way it is. Now … if we had a Rugby (real football) Super Bowl, you couldn’t pry me from the set. That said, the commercials appear to be inescapable. I thought none of them were great this year, but for sentimental reasons I like the Bruce Springsteen spot.

This year’s Super Bowl commercials batch was not the best we have seen in recent years. Taking a different perspective on things, outside of these four larger and more costly commercials, my votes this year go to Oatly and the Reddit team for their bold statements.

Oatly, the non-dairy oat milk industry’s market leader, had their CEO Toni Petersson singing a song in a field about the milk for about 30 seconds. It left many of us with more questions. However if this commercial was all about raising their brand recognition, it was a resounding success.

Reddit has been in the news with all the disruption in the financial markets their communities have sparked. They maximized every one of their five seconds of air time with this statement at the end: “If you’re reading this, it means our bets paid off,” the message read. “One thing we learned from our communities last week is that underdogs can accomplish just about anything when we come together around a common idea.”

I would probably rank the GM spot #1, because it talked about EV cars in a funny but pointed way. It was outside the norm of a typical car commercial, which tends to aim for a loftier mood during the Super Bowl. (See: Springsteen’s ad for Jeep.) I would also rate the Michael B. Jordan ad for Amazon high, purely for its entertainment value.

Overall, not an especially memorable crop (or a memorable game), and there must have been a fair amount of unsold time considering the barrage of ads for Paramount Plus.

I absolutely loved the spot featuring Jessica Long. It pulled at the heartstrings and was a really touching moment. But I honestly did not catch that it was a Toyota commercial. My favorite commercial of the Super Bowl was DoorDash’s “Neighborhood”. However DoorDash and Uber Eats urging people to support local by using their apps feels a little off, as indie restaurants are often paying huge fees to use the delivery apps. Oatly’s “Wow No Cow” was also memorable, if only for being different. I still can’t decide if I liked it or hated it.

This year we saw a lot of hard work based on the idea that the commercial had to work hard to get our attention. All this creative work missed the truth that if they’d said something really meaningful to customers, they wouldn’t have had to strain so much for “big ideas” — in advertising the best big ideas are the ones embedded or directly drawn from the product/service.

That said, in an unremarked flash idea, Uber Eats showed that it may finally focus on people who benefit most from their product when the commercial showed an animation with the Uber Eats bag hanging from a news camera. Who needs to pay a huge premium to get food delivered to them? People who are working and can’t run out to get food.

Otherwise, my vote is one huge “meh.”

This year’s Super Bowl commercials were a mixed bag of humor and emotion. The majority of the ads strayed away from focusing on the pandemic and showed a normal way of life which can be a nice escape. Toyota’s Jessica Long’s story was beautifully portrayed while State Farm’s Drake from State Farm had a great recall value. The winner for me was Bud Light Seltzer Lemonade/Last Year’s Lemons which aptly showed the struggles of 2020 with a humorous twist.

I’m with Crush Norway — funny, smart and does make you realize how far behind we are, all good things.

Lots of these spots are very good, but only the Springsteen micro-movie for Jeep made us say, “Oh wow.” It wasn’t really a car ad, though — more like a paean to American mythology. As an unabashed Broooce fan (not from Jersey!) I was glad to see this one. (Yeah Geo, the cowboy had was a bit dissonant for me to.)

Like the half time performance, I thought the commercials were lacking and not up to what we have learned to expect. The program on either Thursday or Friday night previewing the new and old commercials was far more entertaining. As for the half-time show: after it started, I decided that was a good time to walk my dog.