Who protects store associates when shoppers lash out? 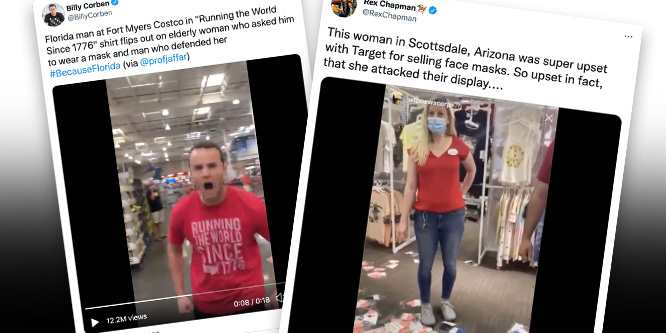 Disturbing stories about customers confronting retail employees, sometimes violently, have been unfortunately growing in frequency in the U.S. for a number of years, especially since the beginning of the pandemic. One reporter recently attributed this escalation to an old retail truism she finds ill-suited to today’s world.

The retail mantra that “the customer is always right” has led to a sense of entitlement sometimes culminating in violence, journalist Avery Hartmans argued in a recent Business Insider article. Ms. Hartmans retells a series of alarming pandemic-era anecdotes about retail employees being threatened, assaulted and even killed over mask mandates. The article draws a connection between Amazon.com’s “Customer Obsession,” an ethos which focuses operations on customers getting exactly what they want, when they want it, and some shoppers’ dangerous sense of being unable to do wrong while in-store.

While customers defiant over mask mandates are an ongoing source of retail-related violence, there are other examples of customers becoming violent over not getting what they want.

For instance, earlier in 2021, Target, following a similar move by Walmart, announced it would temporarily stop selling trading cards after a violent, armed parking lot confrontation over a set of Pokémon cards at one U.S. store, according to Bleeding Cool.

Nor does the problem appear restricted to the U.S. As far back as 2016, reports from Australia described a growing problem with retail workers being insulted, intimidated, spit on and attacked. In the U.K., the problem has grown so big in recent years that the government’s Health and Safety Executive (HSE) released a document analyzing how to prevent retail violence, the first time it had done so since 1995.

The growth of organized retail theft in the U.S. is yet another source of potential violence against retail employees, so much so that chains like CVS have, in high-shoplifting areas like San Francisco, implemented policies restricting store security personnel from pursuing suspected shoplifters. The chain has seen security personnel assaulted on a regular basis in that city.

DISCUSSION QUESTIONS: Why do you think that store associates have become a common target for rude behavior and violence? How can retailers better protect employees from customers who cross the line of acceptable behavior?

Please practice The RetailWire Golden Rule when submitting your comments.
Braintrust
"I think the best way to protect employees is through training, and by creating a culture where the employee can be confident that their management team has their support."

"IMO, this behavior has developed into a cultural problem. It is serious and I don’t see it reversing anytime soon."

"Society relies on certain norms, that laws and rules are simply followed for the benefit of the greater good. It’s a grade-school civics lesson that seems to be fading away..."

15 Comments on "Who protects store associates when shoppers lash out?"

Associates are the face of order. They tell you where to go, what to do, where to pay, etc. Their very job is a position of authority, keeping order. I myself ran into a number of “mask police” just waiting to tell someone to put the mask over their nose. It is a way of exerting power. Now that that seems to be subsiding, it is essential that retailers train employees to make the customer’s day. There will always be those willing to give their all for their cause and they carry phones but you don’t make money from them very often.

This is reality. It sort of always has been for front line retail workers. Just ask anyone who had to work at a return counter after the holidays. What I think has changed more recently is a few more people (only a few, hopefully) see even the slightest perceived offense as an excuse to unleash a lot of pent up frustration.

I think the best way to protect employees is through training, and by creating a culture where the employee can be confident that their management team has their support. Early in the pandemic there was discussion about de-escalation training for retail workers. I hope that is still happening, it’s critical for the employees’ well being and the brand. At the same time managers need to be aware of what’s happening in their stores and be ready to step in when customers are out of line to support the employee or remove them from the situation. This isn’t a great time to be in these roles, sadly.

Retail workers, restaurant workers, flight attendants — this discussion could be written about many jobs that interact with “customers.” The FAA has reported over 2,500 such incidents and 1,900 were related to wearing masks. Just two days ago, three tourist from Texas were not permitted to enter Carmine’s, the NYC institution, because they were not vaccinated and would not wear masks. The confrontation ended with an assault on the restaurant worker. I do not agree “the customer is always right” mantra is the genesis for this increase in violence. The customer has always been right, reference Sears for decades. I believe that it is an attitude engendered to a subset of the population of entitlement, “freedom,” and simply a mindset that “I am more important to you” and the rules, whatever they may be do not apply to me. The aggressor believes their personal rights trump anyone else’s rights. Rules be damned. “They are for you, not for me.” IMO, this behavior has developed into a cultural problem. It is serious and I don’t see… Read more »
7
|
0
-   Share

You’re right, Gene, it’s become a cultural problem for what is hopefully only a “select few” that for the sake of every frontline worker that engages with “customers” we hope doesn’t grow any larger than it already has. Society relies on certain norms – that laws and rules are simply followed for the benefit of the “greater good.” It’s a grade-school civics lesson that seems to be fading away and being replaced by an extreme form of selfishness, as you stated, that the rules “don’t apply to me, only to you” attitude that has unfortunately been made to seem “normal” by certain political leaders and other public figures. Let’s hope this trend reverses on its own because there doesn’t seem to be a way of taking action to cause it to reverse without further emboldening those that take this “only you not me” attitude.

The customer is always right except when they aren’t. The types of behavior referenced in the article are examples of when the customer is wrong. Unfortunately, we live in a time when frustration and tensions are high. Little issues suddenly become big issues and bad behavior results.

Whether you agree or disagree with mask mandates they are a frequent source of these types of instances between store staff and customers. The staff is doing what they have been told to do and they follow the mandate from the local or other government and/or their employer. The customer may feel it is their right not to follow the mask rules. Friction ensues and escalates.

In some other cases such as those referenced in San Francisco the legal system has decreed that what was once illegal behavior is no longer going to be prosecuted, further emboldening certain people to steal.

Society suffers from a case of mass malignant narcissism and employees are often the only adults in a room, and are therefore tasked with the burden of asking self-indulgent customers to act like adults. People increasingly don’t care about anyone but themselves, especially when they are spending money. The cure? Hard to say but lifetime bans on certain customers and increased store security are certainly places to start. Nothing will change though until C-suiters get out of the office and work stores so that the issue of customer-on-associate violence ceases to be an abstraction.

Retailers can better protect employees by including them in their definition of “customer.” Store staff should matter just as much as shoppers do. The past 18 months have centered on building our technology to assist the shopper journey, but it should also assist the employee journey. Giving employees smartphones with apps installed that provide support during and outside of work hours is one example of how retailers can show up for staff the way they have for consumers.

The job of store associate has always been tough, and now it’s tougher. I agree with Gene – it is a cultural problem that is not going away soon. Our country’s reputation for independent citizens has descended to the point that a large minority of citizens are “me first”, whatever they perceive that to mean. For store associates, I’d advise getting your manager involved at the hint of a confrontation, and taking time off or even pursuing another career if retail has burned you out. (You can always come back).

Retailers need to eliminate their highly destructive reliance on feedback from customers. Everything about retail’s survey and punish programs puts the customer in a position to hurt front line employees. We should not wonder that the message given to customers “you are in charge” works out badly.

Instead, retail management needs honest communication with employees which fully understands the challenges they face. Managers need to respect employees every day as they make choices in dealing with customers. Only then will employees trust that management will back them when facing rude or violent behavior.

Retailers will protect workers only insofar as its in their best “economic” interests. So, as bad as these instances are, the “jury is still out” whether they warrant a chance in overall business policy. Which is to tolerate these instances of (ever-growing) bad behavior in favor not so much because “the customer is always right” but in favor of an entire institutionalized ideal of presenting yours as always accessible to every possible customer. Further exacerbating the situation are places, like San Francisco, where some crimes are presented as so petty that they’re not worthy of prosecution. Which rather insidiously comports with how far too many businesses are about being wholly “give them what they want” purveyors — and by way of hapless front line staff. And damn those workers who don’t do their job of being open (and vulnerable), even when being asked to do within a few minutes more than what is really possible. Or that it’s not all about the customers. So until some retailers (and restaurateurs) re-position themselves as not being everything… Read more »
2
|
0
-   Share

I don’t disagree with any of the points offered here — I seldom do — but I think the post could have benefitted from fewer anecdotes and more actual statistics; is store violence really becoming more common? Obviously we’ll never really “solve” an endemic problem like this, but it’s hard to even make headway without some sense of trends, and what’s (potentially) driving them.

Upset and rude shoppers lash out at the nearest human target, the store associates, because they represent the store and the problem that is upsetting shoppers. If these instances increase, retailers should hire store security, evict the shopper, and ban them from the store. Too aggressive? Naw,I don’t think so.

Braintrust
"I think the best way to protect employees is through training, and by creating a culture where the employee can be confident that their management team has their support."

"IMO, this behavior has developed into a cultural problem. It is serious and I don’t see it reversing anytime soon."

"Society relies on certain norms, that laws and rules are simply followed for the benefit of the greater good. It’s a grade-school civics lesson that seems to be fading away..."