Who is winning the shopping search race — Amazon or Google? 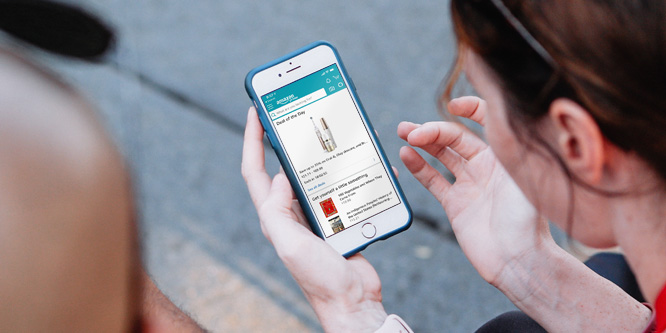 Google is most often the first destination for shoppers looking for inspiration (32 percent) or for those starting their purchase journey with a specific product in mind (31 percent), according to the latest research from Episerver.

There have been conflicting reports about whether Google or Amazon.com are favored for product searches, with some studies indicating Amazon has surpassed Google in recent years.

Episerver indicates that Amazon rivals Google when it comes to shoppers who intend to make a purchase, with 28 percent choosing the online marketplace as their first stop for shopping. Shoppers are less inclined to use Amazon as a destination for inspiration, however. Only 23 percent of respondents report they visit the website first if they are just browsing.

The global survey study found shoppers visiting other marketing places, retailer/brand websites and social media to a much lesser degree for both planned and unplanned purchases. Voice shopping, led by devices from Amazon and Google, is slowly gaining in popularity. According to the study:

DISCUSSION QUESTIONS: How do you think Google stacks up against Amazon when it comes to inspiration and discovery in the online shopping journey? Which company is a better fit to drive voice commerce?

Please practice The RetailWire Golden Rule when submitting your comments.
Braintrust
"Google may win the moment of inspiration, but many roads lead to Amazon from there."

"Google still plays an important role for top of the funnel searches and discovery. But Amazon is certainly the place where consumers close the sale."

"I was surprised that Instagram did not rate at the top for inspiration. I don’t necessarily equate inspiration with search."

14 Comments on "Who is winning the shopping search race — Amazon or Google?"

The separation between “inspiration” and “discovery” is important when weighing the benefits of Amazon vs. Google. Shoppers may be inspired to launch a search on Google, only to find the top results pointing to Amazon. Once in the Amazon ecosystem, purchase history, recommendations and reviews conspire to increase basket size. Google may win the moment of inspiration, but many roads lead to Amazon from there.

I consult to a company that has amazing longitudinal behavioral data. So far, all of the case studies I have analyzed showed more search on Google BUT a much higher conditional probability of going to a product page IF the search occurred on Amazon. Hence, for the question, I’d say Google has a ways to go to rival Amazon for shopper-purposed search. BTW, I have to comment that an attitudinal approach to addressing this issue seems a bit too old school.

“Inspiration” is a pretty bold word to use for either Amazon or Google product searches, but they certainly deliver information and discovery. Using a search engine (be it Amazon or Google) for shopping is akin to spearfishing when you are among the fish. When shoppers are in the market and are looking for solutions (not inspiration) Amazon and Google deliver.

Google must integrate a seamless payment and shopping experience in order for this to be a conversation. Amazon is so seamlessly integrated into the online shopper’s buying process – it’s one or two clicks to research and purchase … and your payment is already verified. Until Google can better integrate research with purchase …

Amazon continues to dominate the final purchase taking 49 percent of e-commerce sales. However Google is a much better platform for discovery and research. Amazon product pages are often incomplete, lacking in images, copy or other important information. Customers looking for ideas or information on a particular product are better served by Google pointing them to numerous articles, videos and even the brand’s own website to gather information on their upcoming purchase. Once that decision is made however they are often going to Amazon for that final purchase.

All of us have our own stories about where we search for ideas and links to online retailers (Google) and where we go when it’s time to buy something (Amazon). Carol and Bethany hit the nail on the head: The closed ecosystem of Amazon is a huge competitive advantage, because you can search for and buy just about anything at one site. Until Google can turn the search process into an order-placement process as seamless as Amazon, it has some catching up to do.

Google still plays an important role for top of the funnel searches and discovery. But Amazon is certainly the place where consumers close the sale. They search Google for the products they are looking for and find the product that is correct for them. But they switch to Amazon to make the purchase. Consumers trust Amazon and know that Amazon has an A to Z guarantee if anything goes wrong with the purchase. When it comes to voice commerce, Amazon will win that battle. Again, because of trust and security.

My personal online shopping habits are somewhat in line with the survey. Google is my go-to to browse for apparel and accessories. I find what I need and go directly to the retailer’s website. Amazon fills the role of search engine when I need a specific hardline item.

Online shoppers were trained to search on Google, it’s no wonder we go there first.

I think given a normal margin of error it looks like they are performing almost dead even. On the other hand I still haven’t heard anyone with a question say, “Wait, let’s Amazon that.” As far as voice commerce goes the winner will be whoever gets the most devices in the most hands. Like some of my BrainTrust peers, I also have a bit of difficulty with the way “inspiration” is being used here.

I was surprised that Instagram did not rate at the top for inspiration. I don’t necessarily equate inspiration with search. To me search is looking for something and one reason for using Google over Amazon for search is that Google encompasses more products, brands and stores whereas Amazon encompasses product available through Amazon. However, as Amazon increases the number of products available, it may gain in the search category.

In terms of voice commerce, the news reports of those devices “listening” to consumers along with the reasons listed for not using voice search will keep this option from increasing quickly.

In the long run, Google wins. Amazon’s relatively stagnant advertising revenues this past quarter are an indication that despite the hype, their advertising is far weaker in impact than planned.

Amazon’s user interface is now in chaos — messed up through the combination of advertising and their own private labels. In my recent searches on Amazon, none of what I wanted was on the first three pages. Those pages were filled with a combination of low quality brands paying high ad dollar and Amazon’s private labels (poorly identified).

I judge it to be a dead heat between Google and Amazon when it comes to shoppers finding a desired item. Google probably has an edge when it comes to higher consideration purchases, as experienced users have figured out that Amazon may not always have the lowest prices. For known-value items, like music, books, and consumables, Amazon probably is the more efficient place to start.

From an inspiration perspective, Google is better positioned to provide links to articles, reviews, YouTube videos, etc. than Amazon is and they will likely continue to excel in this area. However, Amazon may be still leading in the product search arena.

According to the research above, Google leads in the initial search for a specific product, however, other research provides a slightly different story. The research above is based on a global audience (primarily U.S. and Europe and Australia) but if you look at just the U.S. it appears that Amazon in winning the initial product search battle. Nearly half (46.7 percent) of U.S. internet users started product searches on Amazon compared with 34.6 percent who went to Google first, according to a May 2018 Adeptmind survey.

From a voice commerce perspective, Amazon is currently winning as it dominates the marketshare of voice-assisted speakers.

Amazon might be the most powerful search engine in the game, even better than Google. But it’s in a different way. Google is the first search and Amazon is every search after that, as shoppers navigate the marketplace and get deeper into product recommendations and reviews. Amazon wins the sale.

Braintrust
"Google may win the moment of inspiration, but many roads lead to Amazon from there."

"Google still plays an important role for top of the funnel searches and discovery. But Amazon is certainly the place where consumers close the sale."

"I was surprised that Instagram did not rate at the top for inspiration. I don’t necessarily equate inspiration with search."