Which commercial won the Super Bowl? 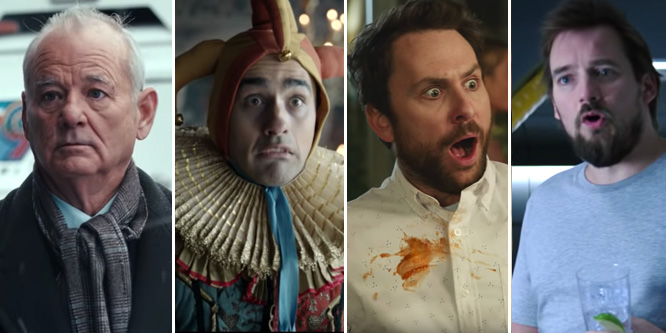 Whether you are one of the 17.5 million people who stayed home from work today or are among the millions of others who showed up at your job ready to talk about yesterday’s game, welcome to the Super Monday version of RetailWire.

While fans of the Kansas City Chiefs are happy today and San Francisco 49er faithful are not, we’re not going to talk about comeback victories, a head coach’s big game redemption or any of the other storylines around the Super Bowl. No, we’re here to discuss which brands cut through the Super Bowl party noise with commercials designed to win future purchases made by American consumers.

In Adweek’s view, the top 10 spots were:

Ad Age ranked the commercials with footballs, with the very best spots receiving five. Three commercials earned that distinction: Jeep “Groundhog Day,” Microsoft’s “Be the One” and SodaStream’s “Water on Mars” commercial, in which astronauts find water on the red planet only to have one of the crew drink it mistakenly. (He thought the bottle read “Mark’s water”.)

CNN ranked spots as winners and losers. Among the winners not named in the Adweek and AdAge lists were the Doritos’ commercial with Sam Elliott and Lil Nas X in a dance-off to “Old Town Road” and Walmart’s science fiction-themed “Famous Visitors” spot for its same-day store pickup service.

DISCUSSION QUESTIONS: Which commercials do you think won Super Bowl Sunday? Why?

Please practice The RetailWire Golden Rule when submitting your comments.
Braintrust
"All-in-all a strong creative night of commercials in tune with their audience."

"There is a danger in inserting too many celebrities into a 30 second ad. That drives the viewer’s attention to the celebrities and not so much on the product."

"My vote goes to the Groundhog Day ad for Jeep. It not only utilized a relevant theme with the timing of this year’s Super Bowl, but also managed to easily and humorously tie i"

30 Comments on "Which commercial won the Super Bowl?"

For people who love “Groundhog Day,” the Bill Murray Jeep spot was irresistible. It managed to tip its hat to the movie without forgetting that the Gladiator was the center of the commercial. (Likewise the Hyundai ad, which presented a strong demo for its Smart Park commercial in the middle of all those Boston accents.)

On the tech front, the ads from Google and Amazon used much different approaches to enhance their brand images given broad concerns about privacy. Google used emotion, Amazon used humor, and both of them did a more effective job than Facebook.

No contest, the winner for me is Google’s Loretta. It wasn’t flashy or full of wall to wall celebrities, but it was packed a punch with simple humanity. I immediately visualized my father and how this could have helped ease his pain a little after my mother died. It made me love Google just a little more.

Walmart clearly went all in with their Super Bowl commercials. While the Bill Murray “Groundhog Day” Jeep commercial was a personal favorite as it’s a movie I get nostalgic about, Walmart’s famous visitors ad takes the win.

Walmart mixed a bit of nostalgia, emotions and connections we have built with iconic movie characters, while weaving in their convenient fulfillment BOPIS narrative. These are the kinds of ads that just resonate, especially as Walmart has invested significantly in expanding their customer base.

It’s all about changing perceptions, and Walmart has made significant strides to undergo another transformation to attract the modern customer.

Not a great year for Super Bowl ads by any measure. The Rocket Mortgage and Jeep ads were clever and captured my attention more than the others, while Google’s was better than most at presenting a value proposition for viewers. Still, as my wife said, most were ridiculous and delivered absolutely no incentive to buy the product or service that was being promoted.

This was the first year ever that the Super Bowl was on Groundhog Day – so the Jeep/Bill Murray commercial gets the win for tying it all together with a perfect bow.

Interesting that with all the pre-game hype, Mr. Peanut did not even make the list! #RIPeanut

I think it needed the additional hype that was cancelled due to Kobe Bryant’s tragic death. As a stand alone it didn’t work. And what was with the peanut making dolphin sounds?

Was disappointing, wasn’t it?

If the test is which commercial left you with a desire to try or buy a product, then not very many hit the mark. Overall, I’d say this wasn’t a great year for Super Bowl commercials, although perhaps better than last year. The top three for me were Walmart for their grocery pickup service bringing in so many beloved and nostalgic characters, Jeep for making great use of Groundhog Day the movie and the fact that the game was on February 2nd, and Microsoft for promoting something that should make everyone smile and feel better. While Amazon’s entry was amusing for reminding us what life was like before Alexa, Google’s ad reminds us just how much data they have on all of us and reminds you why there is so much distrust of their use of that data. Facebook fared no better. Going back to my original question – which one makes we want to try it — I’ll go with Walmart if only because it’s the most memorable one. I remember clearly what happened… Read more »
2
|
0
-   Share

While Google’s Loretta ad is heart wrenching, PepsiCo won the night. Its Cheetos ad with MC Hammer popping out of a rolled carpet sparked uproarious laughter, the brilliant Bryan Cranston made The Shining extra creepy for Mountain Dew and Sam Elliott’s moustache did the wave in a dance-off for Doritos.

This Super Bowl Sunday, we were the winners! An amazing set of commercials aimed at honoring our personal histories, our memories, and simultaneously seeing how technology can be harnessed for the good.

Tops was Google’s Loretta as a gut-punch reminder of the relationships that define us and what we (ought to) value in life. Live life fully and do create and treasure your moments.

Jeep’s Groundhog Day was brilliantly creative and fun, while Amazon’s Before Alexa witty one liners had a standup comic character to them; and while funny, they won’t age so well.

All-in-all a strong creative night of commercials in tune with their audience.

The two I can recall most clearly this morning (yes, I’m at work) are Hyundai and Rocket Mortgage — but I only recalled the product from Hyundai. I’m going with “Pahk the cah.” (Although I loved “Groundhog Day” and Bill Murray!)

Overall a disappointing array of Super Bowl ads. My favorites were Jeep and Doritos. Both engaging, focusing specifically on their respective brands. However, the best ad for me was one not included in the various reviews, namely, the NFL 100 year commercial that led off the game. It was a terrific story, visually appealing and connected across generations. Too bad most other ads paled in comparison.

I really liked the Snickers commercial. If only…

The Groundog Day commercial won it for me. The Rocket Mortgage commercial with Jason Momoa was just weird..The Tide commercial gag wore on too long but I’m glad to see the Bud Light Robot back after being killed off last year…

This was the worst group of commercials that I can remember. Yes, some were cute. Most I found terribly annoying. For most, I didn’t even realize what products were that they were advertising. Case in point my very favorite, “Be the One.” I didn’t realize it was for Microsoft until I read the discussion topic today.

I found the ones that used first responders, military and flag waving to be totally inappropriate and embarrassing. What did they have to do with the product or the company? I want the Clydesdales back.

I think the agencies try to top the previous year and have gotten more and more complex, showy, and complicated to the extent that the message becomes irrelevant.

Ah, the Super Bowl ads for 2020. Most were silly. None were momentous. But there were some moments… I probably laughed the most at the Hyundai “Smaht Pahk” bit because the South Boston accents were so over the top. But Jeep’s “Groundhog Day” is in my top five for its on-target send-up of the movie. Snickers’ “Feed the World” gets honorable mention for best punch line. The Doritos “Dance-off” with Sam Elliot and Lil Nas X had the scene stolen by Sam’s horse in the second-best punch line of the night. I’m easily swayed by sci-fi tropes, so Walmart’s cleverly-produced “Famous Visitors” captured my attention. Also earning some chuckles in my house was the “Comfortable” spot from Rocket Mortgage. Those were my top five (in no particular order). Google’s “Loretta” spot deserves special analysis for its juxtaposition of calculated sentimentality and chilling dystopia. Not in the same league as Apple’s famed “1984” spot, but quite possibly a truer vision of a possible future. I confess I’m a bit worried about what might happen after the… Read more »
4
|
0
-   Share

“Comfortable” made me laugh the most with a combination of visual absurdity and perfect casting.
I’m not sure what the fuss over “Loretta” was, though admittedly it ran right when someone started chopping up onions for the chili so I was distracted. I’m not crying…you’re crying.

Bill Murray’s take on Groundhog Day and pushing the new Jeep was a great ad; it was memorable, delivered a message, and made a lasting impact for its product. All of these factors make for a great ad and this commercial was clearly one of the best Super Bowl ads.

This was a really great line up of commercials with some great ideas encompassing humor and sentiment – my vote goes to the Groundhog Day ad for Jeep. It not only utilized a relevant theme with the timing of this year’s Super Bowl, but also managed to easily and humorously tie in the product.

Tide received only 6 percent of BrainTrust votes for the top spot.

Here’s why I believe it deserves first place: the mini-ads created an ongoing story, which was cumulatively impactful and seared the brand into the brain. Multiple mentions enabled the brand to own the entire event.

Today the challenge for these ads is that the audience is expecting such a dramatic presentation that if the ad is anything less than earth-shaking, most people won’t remember it. And that’s a ton of expense and use of resources for the advertiser for a questionable ROI.

Before I tell you who I think the absolute winner was/is, let me make one point: There is a danger in inserting too many celebrities into a 30 second ad. That drives the viewer’s attention to the celebrities and not so much on the product. We tend to remember more of celebrity appearances in Ground Hog Day easier than Jeep’s message. So my favorite: Loretta. Hey guys, let us not forget that emotion sells! And that was one emotional experience for all of us. By the way, who was the actor in that spot? What does it matter?

The beauty of the Loretta ad is that it’s based on a Google employee’s grandfather and uses the grandfather’s voice. Love that, too!

I really enjoyed the Doritos commercial featuring Lil Nas X and Sam Elliott having an ole fashion dance off. What a fantastic juxtaposition between old school and new school.