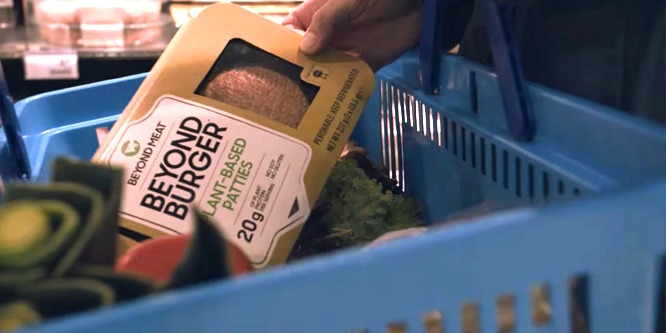 Beyond Meat is set to go public this week with a valuation over $1 billion in another sign that meat substitutes are heading mainstream.

Burger King’s existing vegetarian burger largely appeals to vegans and vegetarians, but those two groups only make up about seven percent of the population. Substitute meat and poultry is largely aimed at the wider audience of carnivores.

One driver of the meat alternative trend is the desire among more consumers to eat less meat for health reasons. Among other perceived benefits, meatless products avoid antibiotics used to feed livestock.

Ethical concerns over animal welfare is another driver, but cited even more often are environmental factors. Intensive animal agriculture is claimed by many to be a major source of greenhouse gas, water use and pollution.

Many proponents see the goal as reducing rather than eliminating Americans intake of meat. At the least, the opportunity that Tyson, Purdue and Nestle are also pursuing could be similar to non-dairy milk products, which has risen to 13 percent of the size of the traditional dairy milk business.

Some proponents vow meatless varieties will be required to fix a broken food system. Dan Altschuler Malek, a partner at New Crop Capital, an early investor in Beyond Meat, told the Guardian, “At some point, the planet will hold nine billion-plus people, and the reality is there are not enough resources to sustain current levels of protein consumption.”

One risk is a potential backlash to the genetic modification required to use plants to imitate the flavor and texture of real meat. Impossible Foods CEO Pat Brown countered to the Chicago Tribune, “Pretty much everything that’s in the world’s diet is not something that just fell off the tree.”

Please practice The RetailWire Golden Rule when submitting your comments.
Braintrust
"The benefits of these products need to be more clearly tied to real-world concerns for consumers for them to make a significant sales impact with meat-eating consumers."

"Understanding the “problem to solve” is important here. Is it health reasons, environmental concerns, ethical, or other? Or some combination?"

"Eating less meat is a wave, not a fad. And these products could actually fool you. Very smart branding."

The strategy of Beyond Meat is right on the money. Instead of selling the vegetable based burgers and sausages in the vegetarian section, they are positioned in the meat section of the grocery store.

Vegetarians will seek them out if they know they are sold at meat counters. But meat eaters may very well give them a try when they see them with their traditional ground beef and chicken patties. Folks know meat is not a great nutritional choice.

Eating less meat is a wave, not a fad. And these products could actually fool you. Very smart branding.

I recently attended FMI’s Annual Meat Conference where, not surprisingly, this topic came up. Even with all of the new players bringing a whole host of wonderful options to the market, the meat industry had its best year ever last year, so clearly this is not an either/or situation.

Understanding the “problem to solve” is important here. Is it health reasons, environmental concerns, ethical, or other? Or some combination? Regardless, this is a rapidly evolving space with unknown issues and complexity. For example: if health is the motivator, is a high-processed food product to replicate meat really the solution?

It is extremely difficult to build a successful business — particularly a food business — based on the absence of a negative. It took about 30 years for “reduced calorie” to finally overcome its association with “bad taste.”

A more recent example, gluten free, was purported in consumer research to appeal to up to 12% of the population — even though less than 1% actually suffer from celiac issues. The boom/bust cycle of gluten free quickly reflected the reality. It’s a nice attribute, but not a substantive reason for creating a new mainstream brand.

Non-dairy has grown based on attributes beyond lactose-free. One example, shelf stability changed the market for coffee creamer and flavoring. Plant-based protein products would do well to take a lesson. Market great tasting new protein products — not “meatless meat.”

This is a very interesting space right now and will continue to be for a while. At 13% of the traditional dairy milk business, I wouldn’t call non-dairy milk products popular. Even with the challenges (GMO, processed), I believe plant-based meat substitutes will eventually eclipse that number. I will say that as a meat eater, I have tried the Beyond Meat product and it is very close to “the real thing.”

While secret taste tests to fool consumers provide interesting PR and promotional material for plant-based meat alternative providers like Beyond Meat, it’s still not clear what problem this is really solving that goes any deeper than just “preference.” It’s interesting to say these alternative solutions will appeal to vegetarians who want a better tasting burger than the existing offerings, but, many vegetarians will tell you they don’t long for the taste of meat once they’ve been a vegetarian for a while. So, who is the target customer, other than someone trying out the novelty? Unlike non-dairy milk alternatives which are solving health issues for many people, there appears to be less concern on that point here, other than just saying “I want to eat less meat.” For those that can’t eat dairy for health reasons, the non-dairy alternatives are less about choice than they are a necessity. That’s not necessarily the case for these meat alternatives. The benefits of these products need to be more clearly tied to real-world concerns for consumers for them to… Read more »
2
|
-1
-   Share

This almost seems like a trick question, since almost any level of success would be the same as non-dairy milk alternatives (i.e. I don’t think the latter has a very large market share … hoopla notwithstanding).

But back on point, I was a little disappointed that more wasn’t made about Burger King’s move. I’m not saying it’s going to transform their fortunes overnight, but it seems like the kind of forward-thinking differentiation they’re going to need to make if they are to achieve that success. OTOH, maybe people feel mass-market fast-food isn’t the right venue to debut this type of product … we’ll just have to see.

As for the Beyond Meat itself, I think it should try to find success the way most products do: by focusing on people’s self-interest(s), rather than lofty world saving rhetoric than many will find hard to swallow … so to speak.

Plant-based meat alternatives have been very slow to develop a loyal following from consumers. One of the biggest hurdles is to even get consumers to try meat alternatives. I recently tried Beyond Meat as a sample at an event and I was extremely surprised on how much it tasted like beef. In a blind taste test, I don’t think I could identify that it wasn’t beef.

The key is to get more people to try it. As more restaurants offer it and supermarkets offer samples, it will eventually take off. The potential is unlimited, as evidenced by the $1 billion valuation or Beyond Meat’s public stock offering this week. It is a big deal and these meat alternatives are primed to take-off!

This is a a third world food shortage solution priced far too out of reach. Vegans and vegetarians are a relatively stagnant market segment with short term commitment to the cause. Not many have the money supply to take a reach like this on a regular basis.

Braintrust
"The benefits of these products need to be more clearly tied to real-world concerns for consumers for them to make a significant sales impact with meat-eating consumers."

"Understanding the “problem to solve” is important here. Is it health reasons, environmental concerns, ethical, or other? Or some combination?"

"Eating less meat is a wave, not a fad. And these products could actually fool you. Very smart branding."