Where will Old Navy’s new captain steer the ship? 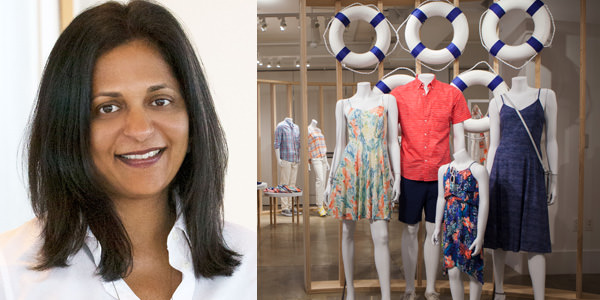 For several years, Old Navy was the clear bright spot among the portfolio of struggling brands owned by Gap Inc. That was until last year when the chain began falter. The big question this morning is whether a newly appointed CEO, Sonia Syngal, a 12-year vet with Gap Inc. will be able to right the Old Navy ship or if the chain is destined to sink further.

First for the background: In October of last year, Old Navy saw its president, Stefan Larsson, leave the company to become CEO of Ralph Lauren. Mr. Larsson, a former executive at H&M, was widely credited with helping to put new life into the Old Navy brand using some of the fast fashion supply and branding practices learned at his former job.

By the end of the year, Old Navy had posted its fourth consecutive year of sales growth. Unfortunately, comparable store sales had gone flat in the fourth quarter compared to rising five percent during the same period in 2014.

The beginning of 2016 has not provided a cause for optimism. Last month, comp sales at Old Navy were down six percent globally compared to being up 14 percent the year before. Comp sales were also flat in February and down six percent in January.

The hiring of Ms. Syngal brings her back to Old Navy where she served as senior vice president of the retailer’s international division in 2013 until she was chosen to serve as Gap Inc.’s executive vice president of global supply chain and product operations. In that role, Ms. Syngal worked with her predecessor and his team to develop Old Navy’s system for speeding products to market.

DISCUSSION QUESTIONS:
What do you see as the keys to Old Navy getting its business back on track? Is Sonia Syngal the right person to lead the company at this time?

Please practice The RetailWire Golden Rule when submitting your comments.
Braintrust
"I’d say it’s (past) time to first re-examine the customer base and its relation to the brand and then reinvigorate the brand, make bold statements in design and take a hard look at in-store operations to see how and why they are delivering declining results."

4 Comments on "Where will Old Navy’s new captain steer the ship?"

I am not qualified to judge Ms. Syngal’s fitness for her new post, other than to say her hiring makes sense on paper. That said, her quote about staying focused on, ” … balancing amazing product with operational excellence,” doesn’t give us much to go on.

It’s marketing apple pie and brand flag waving, but it is not content-rich strategy.

If I look at Old Navy’s television ads they seem to be telling me I can buy generic, suburban clothing cheap. That’s not really the same thing as “amazing product.”

Focusing on “operational excellence” is necessary, but not sufficient to promote positive results.

So I’d say it’s (past) time to first re-examine the customer base and its relation to the brand and then reinvigorate the brand, make bold statements in design and take a hard look at in-store operations to see how and why they are delivering declining results.

Now that would be “amazing.”

I’m sure Ms. Syngal will be a leader. Gap has a strong internal promotion strategy.

The key to moving Old Navy forward is to revamp the merchandise. Old Navy won’t beat the fast-fashion pioneers by recycling designs from years back. Update the styles and watch sales move forward.

This issue is a complicated assessment, since people who excel at supply chain and product operations may not have the desired skill sets to lead, manage, and invigorate an internal turnaround. Additionally, there needs to be empowerment in the selection committee who is looking for a replacement for a corporate leader, which brought them much success before. Instead of finding a new leader, the company appears to be recycling employees, which is a dangerous precedent, since change management requires unique, different, and often new, perspectives in order to be successful. Ms. Syngal does not have any of these experiences, and doesn’t sound like the best individual for this position.

Live by the fad, die by the fad. Years ago, ON was one of the first “fast fashion” chains; they had novelty, quirky ads and — most importantly — what people wanted: inexpensive, tolerably stylish clothing. They don’t have the first two anymore, and while they still have the third, so do lots of other people. Maybe a fashion guru will help, and Ms. Syngal is probably as good as anyone, but she’ll have a tall hill to climb.

Braintrust
"I’d say it’s (past) time to first re-examine the customer base and its relation to the brand and then reinvigorate the brand, make bold statements in design and take a hard look at in-store operations to see how and why they are delivering declining results."