When should brands go down market? 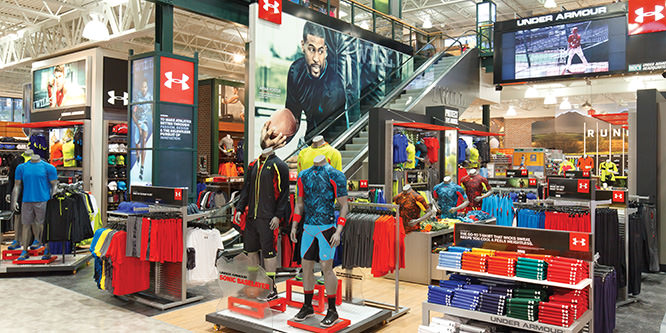 Under Armour, which for most of its 20-year history has attributed much of its authenticity to being sold exclusively in the sporting goods channel, last week revealed it would begin selling in Kohl’s in 2017.

The sports brand only began selling to traditional department stores such as Nordstrom and Macy’s in recent years and only recently made product available at two big mall-based athletic chains, Foot Locker and Finish Line. Kohl’s would mark its first sales in the mid-tier department store space.

The move is part of a strategic push to reach a wider range of customers across three areas: channels, categories and geographies.

On his company’s second-quarter conference call, Kevin Plank, Under Armour’s CEO, described Kohl’s as “one of the top retailers of activewear in the U.S.” The move will particularly help Under Armour reach women as the brand has traditionally skewed more towards men. It also comes as Under Armour has begun adding more casual or lifestyle offerings after focusing largely on workout gear.

“This decision to reach new consumers through Kohl’s is not a channel consideration but a consumer consideration,” added Mr. Plank.

Mr. Plank said there was “nothing reactionary” about the decision to sell through Kohl’s, referencing Sports Authority’s abrupt exit. He described the move as part of natural evolution of the brand that came only after investments over the last several years were made to help further differentiate across channels.

“We believe that there’s a massive opportunity with the consumer that’s walking into those stores and looking for the Under Armour brand, and frankly, they just haven’t been able to find it,” said Mr. Plank.

Obviously, selling a new account sometimes irks existing accounts. A sporting goods chain may decide to dedicate a coveted space for an exclusive, up-and-coming brand at Under Armour’s expense. Its primary competitors, Nike and Adidas, however, also sell to Kohl’s as well as numerous outlets such as J.C. Penney and Famous Footwear where Under Armour doesn’t sell.

DISCUSSION QUESTIONS: What should guide a brand’s decision to expand to a lower-tier channel? What are the obvious and less obvious risks in such moves?

Please practice The RetailWire Golden Rule when submitting your comments.
Braintrust
"In this environment, department stores and supermarkets have advantages over category leaders because shoppers schedule regular shopping trips there."

"As long as Under Armour maintains its own stores and controls its brand perception, there's no downside to moving to Kohl's."

18 Comments on "When should brands go down market?"

Tempest in a teapot. I recall it was touted as a big deal when Nike, Adidas, Reebok and others started selling running shoes to wannabes, as a fashion statement, practically everywhere but barbershops. In the trade press, the world was coming to an end. It didn’t.

Decisions to switch and/or adopt new channels for a brand is all about reach. And clearly Under Armour’s move into Kohl’s department stores opens up an entirely new avenue to influence a new group of shoppers and influence their activewear choices (especially women).

The risk, of course, is disruption to existing channel partners or cannibalization of sales. Personally, I don’t believe this will greatly change Under Armour’s success and panache within their traditional sporting goods retail strategy but rather raise the visibility and appeal of the brand overall.

I’d be watching for others to follow suit (I have several likely candidates on my short list and I’m anxious to see which of my predictions come true).

A very good decision in my opinion. With the rise of online shopping, pure-play consumer electronics and sporting goods retailers find it increasingly hard to attract shoppers. In this environment, department stores and supermarkets have an advantage over category leaders because shoppers schedule regular shopping trips there.

Recently in the UK the consumer electronics specialist Argos was taken over by the supermarket chain Sainsbury’s, citing a similar logic.

In a world that subscribes to “lead, follow or get out of the way,” brands know it is time to go down market when their brand equity on the high-declining part of the cycle as their product lines and “secret sauce” are being commoditized and its cachet in these offerings cannot be cost-effectively recovered (typically due to more intense competition). At this convergence it is time to harvest revenues to fuel the innovations for niches that will satisfy the ever-changing demands of consumers.

The best athletic brands are already available at off-price retailers like T.J. Maxx. As long as Under Armour maintains its own stores and controls its brand perception, there’s no downside to moving to Kohl’s.

There’s growth for one. There are only so many elite athletes in the world. Ditto for dedicated hobbyists. So if you are an athletic brand, and you want to grow, moving to lower-tier channels is almost inevitable. The most serious risk is obviously damage to brand reputation. If Orvis rods and reels were suddenly available at Walmart, how special would they be? And there is always the danger that purists and elitists will abandon an athletic brand when it is commonly seen on individuals whose exercise appears confined to raising a Big Gulp to their lips.

That said, that hasn’t hurt sales of, say, Harley-Davidson wear which is most often seen on people whose last experience on two wheels was on a bicycle. There’s also the problem of maintaining price integrity which is why certain tiers of products may be available in all channels while the more high-end items may not. All that said, especially as in this case, expansion down is probably the only option.

Most of the earlier comments say the same thing I am going to say. What’s the big deal? Under Amour’s competitors are selling to other markets than the sporting goods market and have been for years. I noticed many of the shoe manufacturers selling to department stores are not selling their top brands. We might see the same thing happen here. Every business operates to sell more products or services. This is nothing different and should not be a big deal. Next subject.

With athleisure wear on trend now, it makes perfect sense that Under Armour would spread the joy. I would simply suggest that this be a separate category not to be confused with higher-end athletic wear. This will maintain the integrity of the brand. IMHO.

If Under Armour wants to gain share at Nike’s expense, why not sell where Nike already has an established beachhead? Without having any insider information (I worked for Kohl’s from 1982 to 2006), I’m speculating that they have a very large and healthy active/fitness apparel and shoe business across all ages and genders. Seems like a no-brainer to me.

If there is a channel that will reach more consumers who aren’t already buying the merchandise but are willing to do so, why wouldn’t a brand take advantage of it? I always thought of Under Armour as a higher-end or exclusive type of brand. Their decision to go mainstream is a good business decision. Down-marketing or a wider market — the result is more sales impacting the top line and hopefully bottom line.

This is a win-win.

Kohl’s needs some new news for back-to-school and Under Armour is expanding its engagement in the active wear war. Kohl’s gets the hot brand in the category. When shopping Under Armour and Nike on Michigan Ave., it’s obvious what brand has mass appeal. Under Armour’s price points being beneath Nike probably has something to do with it.

Kohl’s has top five apparel share. Along with that comes brand Under Armour’s exposure to moms wardrobing kids who might be familiar with brand Under Armour. As Dave says, it is “reach” and maybe it is un-duplicated.

Channel strata be darned! Nowadays a retailer must sell what its shoppers want. And brands need to be where their customers are. If one can get it at T.J. Maxx or on Amazon then it should be everywhere.

Or as Phil Knight might say, “retail ain’t for sissies!”

There’s nothing inconsistent about these two brands being in the same place. If it was a dollar store involved, maybe that might make a difference, but for the consumer it’s pure convenience.

Under Armour has clearly looked at the market and determined that if they want to continue to grow then they need to expand their reach to a broader swathe of the shopper population.

Their challenge with this approach is to maintain the brand image as they look to reach beyond their core customer base. If they can successfully navigate this challenge then they will continue to grow with not only their current customer but newly acquired shoppers as well. However, if their core shopper feels Under Armour has abandoned their brand position in order to attract a “new crowd” then they could have some backlash and run the risk of loyal customer attrition. The way Under Armour executes will be key to their success with this next chapter and clearly they view the upside opportunity as outweighing the potential risks to their brand image.

Sometimes a channel selection is based on legitimate criteria; a high end item might require than it be sold where serving is offered — if it’s something mechanical/electrical — or where sales staff are sufficiently knowledgeable that they can answer questions and help in product selection. But sad to say, neither of these really describe Macy’s anymore and anyway, underwear…? Sorry, no: this was an image building exercise. Once a product reaches a certain market penetration and still wants to grow bigger, it has little choice but to be offered everywhere.

At some point, every “exclusive” strategy runs into a growth wall. There’s only so much growth possible in the channels they’ve stressed. At that point they have to choose whether to expand or to stay put and accept the growth restrictions.

Clearly Under Armour chose growth. And I think it’s a good thing. Read Byron Sharp’s “How Brands Grow” for the Double Jeopardy model. It shows that the biggest brands get that way because they have more light customers and that leads to everybody spending more on average.

Under Armour’s choice to pursue lower spend customers is absolutely in line with good business practice.

That said, their challenge now becomes controlling it so that the brand survives unsullied. Calphalon blew it in this regard. Once Rubbermaid purchased them, they ran as fast as they could toward “cheap.” And now they have lost all the value added appeal. (Remember, cookware sets from Calphalon used to demand $600. Now they’re $59.99 at Target.)

Kohl’s has a very different brand identity than T.J. Maxx — bear with me a second. Where T.J. Maxx is known as a place to find trendy, branded merchandise for less, Kohl’s is a down-home Midwestern realtor, known for Chewbacca mom.

Under Armour has thus far maintained their brand’s desirability. It is in fashion and people want it. Selling at Kohl’s is going to burst the brand’s it-factor.

Understanding your brand DNA and your core customers is key in deciding to sell through a lower-tier channel. In this case, it’s a non-issue as Under Armour is a mass brand.

If they have different tiers of products/they can be positioned a bit differently, it makes sense. By expanding into lower-tier channels, they can broaden their brand awareness and reach to a new customer segment.

Some risks might be possible brand damage/change in brand perception, relationships with existing channel partners, but keeping the above in mind, I think it’s fairly minimal, especially in UA’s case.

Braintrust
"In this environment, department stores and supermarkets have advantages over category leaders because shoppers schedule regular shopping trips there."

"As long as Under Armour maintains its own stores and controls its brand perception, there's no downside to moving to Kohl's."