What’s the right messaging amid the coronavirus outbreak? 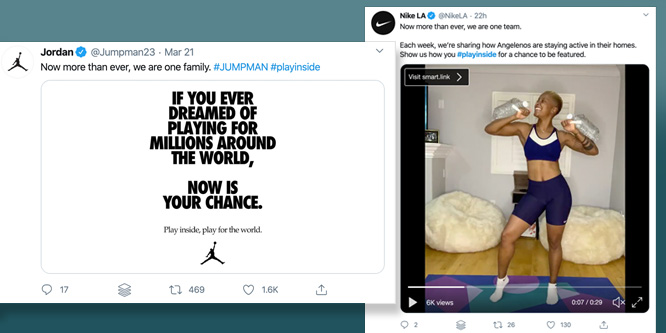 “If you ever dreamed of playing for millions around the world, now is your chance. Play inside, play for the world.”

That advertising campaign embracing the importance of social distancing came out Saturday from Nike and promotes that brand’s workout app, Nike Training Club, that is now accessible free of charge amid the crisis.

The campaign appeared to strike the right tone and received wide positive coverage across the media. Many recent efforts, however, have been suspended or scrapped.

In Brazil, a McDonald’s campaign that separated its two arches to encourage social distancing has earned mixed reactions. The motto: “Separated for a moment so that we can always be together.”

In a March 11 blog post on messaging during crises, Alex Josephson, global head of Twitter Next, and Eimear Lambe, director of Twitter Next, stressed the importance of recognizing changing consumer behaviors, including spikes in video streaming and online purchases. They also urged marketers to be thoughtful about voice tone, to employ up-to-date messaging and to know your brand.

The two wrote, “It’s about understanding the unique role your brand plays in people’s lives, how that has changed, and how your brand can help or be useful during this crisis. It’s also about looking for opportunities to lead by example, and do the right thing, where it makes sense for your business.”

On his company’s second-quarter conference call on March 18, General Mills chairman and CEO Jeff Harmening suggested ads not talk about “stocking up.”

In his own opinion, “with very little data to back it up,” Mr. Harmening said standard advertising was important.

“I think it also can connote a sense of normalcy for people as their lives are anything but normal in many parts of the world,” he said. “And so, for us, we think we have a responsibility to do that, whether it’s delivering our products or whether it’s advertising Cinnamon Toast Crunch.”

DISCUSSION QUESTIONS: What advice would you have about appropriate messages from brands and retailers during the COVID-19 crisis? Should brands play it safe until the worst of the outbreak has passed?

Please practice The RetailWire Golden Rule when submitting your comments.
Braintrust
"I really don't think retail has to jump at every event in life as a marketing opportunity. "

"We will be in this stay-at-home, work-from-home reality for many weeks if not months. Brands and retailers need to play the long game."

"Brands should recognize that any message should provide a sense of hope, that things will work out. Hard sell is out for now."

15 Comments on "What’s the right messaging amid the coronavirus outbreak?"

Right now people are equal parts afraid and annoyed. They want this to end, but also want to be safe. Brands should recognize that any message should provide a sense of hope, that things will work out. Hard sell is out for now.

I have received hundreds of emails from different companies outlining what they are doing to protect their workers as well as notifying customers about the health of their supply chain. Their message is, “we know this is difficult and unknown but we are in this together.”

There is the right balance to strike during the COVID-19 pandemic, and brands should tread carefully during these uncertain times. While it’s a fact that everyone is being inundated with the “we are there for you” emails on a daily basis, consumers will remember the brands that ignite an emotional bond and were truly there for them.

Now is certainly not the time to capitalize on everyone’s uncertain quarantine life with both kids schooling from home and adults working remotely from their homes. However, nostalgia is a powerful tool if used correctly. There will ultimately be an end to this pandemic and our new normal will begin. While that reality may seem far away, consumers will remember the messaging, as well as the actions, companies have taken to look out for their needs.

I agree, Brandon. I’ve gotten dozens of the “we are there for you” e-mails from companies I do business with, as we all have. Some of them have value, but a number of them have sent messages letting me know all the great things I can do with their websites and apps, since their physical locations are closed and their phone lines are jammed. There is something that rubs me the wrong way about it being 2020 and my bank telling me they have a website.

I really don’t think retail has to jump at every event in life as a marketing opportunity. Sometimes isn’t it best to be just another body sharing in what is going on. If you have something that might make the time go by a little easier, then share it. If not, then share your sympathy and maybe try to do something for the betterment of others. It’s time to keep it simple, thoughtful and not think about sales first. And that’s just my 2 cents.

I’m very late to the party today, Lee, and I’m sorry because I would have liked to jump in and support your POV while more people were still reading. It seems the ability to spill digital ink to the world in nanoseconds at no cost has convinced us that we should — every time something happens. As young brand marketers, we often found ourselves fighting for funding for media or an event. One of the tried and true arguments was “but we will be conspicuous in our absence!” These days I think that has become the more proactive strategy sometimes.

My advice would be to absolutely play it safe. Don’t turn COVID-19 messaging into green-washing. If there is direct contact with customers tell them what you are doing to protect them or get them their merchandise. If the company doesn’t have direct contact with the public, stay quiet.

The message depends on the type of business however an upbeat (though not Pollyanna-ish), confident, safety-based vibe applies to all. People are looking for an escape from the barrage of coverage and want to know that an end is in sight or that at least some things are under control in the meantime. In fact, the conflicting messages from other sources create an opportunity for brands that communicate with clarity.

Which way to go with your message during this time? It depends on the brand. Creating the best possible “sound in the woods” for some brands during this time may be more important now than ever. During times like this it can be challenging to understand which way to go when it comes to how to handle advertising/marketing efforts and plans. Many organizations will make quick, emotional decision to suspend them. But now may be the most critical time to stay the course, remain on brand and maintain your “share of voice.” You may transition your messaging and/or explore different channels/platforms to deliver such messages while remaining relevant during this unprecedented situation, given your audiences and how they are being impacted. Like the article mentions – can your brand be useful during crisis? It’s about doing the right thing where it makes sense for your business. Keeping your “sound in the woods” with the right message on the right channels to reach the right people, you will be heard. If done correctly, your stakeholders will… Read more »
1
|
0
-   Share

Now is the time to be hyper-sensitive to branding and messaging. The public will jump all over you if you overtly take advantage of the situation.

The message should be simple. QUIT selling and start carrying. We are all in this together, so let’s work together.

Messaging is important in both stable times and uncertain times. Retailers need to be authentic, compassionate, and transparent. Sharing what they are doing to support their internal teams and their communities is important as well as tailoring the message to match the brand and service. Silence during this time is not golden.

As I noted the other day, the continued presence of ads for sales and other things not actually going on is weird, but presumably can’t be stopped.

The situation here reminds me of back in 2008. It’s a time of panic and great uncertainty. People are looking for reassurance and hope, but they are also looking for leadership; “what should I do?” is a phrase I’m hearing a lot. The best e-mails I am getting right now are those that A) Give me pragmatic and practice advice I need away from the noise (e.g. how to look at government support), B) sharing with me what others in similar positions are doing so I can get a sense of what is happening from isolation C) making me smile … a little good humour is going a long way right now

We will be in this stay-at-home, work-from-home reality for many weeks if not months. Brands and retailers need to play the long game. This is not about getting a sale today, it is about maintaining and nurturing authentic relationships with existing customers, while being out there with authentic messaging that is true to your brand DNA. Inauthentic messaging is being panned across social media, while authentic and often cheeky (but not crass) messages are hitting the right chord. Those that project “we will win this together,” and deliver value and some normalcy as people who want to shop begin doing so, are poised to win the long game.

Braintrust
"I really don't think retail has to jump at every event in life as a marketing opportunity. "

"We will be in this stay-at-home, work-from-home reality for many weeks if not months. Brands and retailers need to play the long game."

"Brands should recognize that any message should provide a sense of hope, that things will work out. Hard sell is out for now."