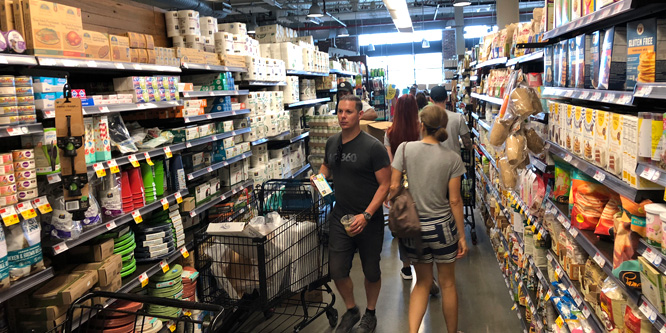 A new study from the University of South Florida finds that loud music in a restaurant or grocery store leads to more unhealthy food choices, while quieter music leads to heathier ones.

Ambient music can influence healthy or unhealthy food buying, according to the researchers, because it directly impacts heart rate and arousal. Softer music has a calming effect, making people more mindful of what people order in a restaurant. Louder environments increase stimulation and stress, leading to less-mindful choices.

Beyond restaurants, the research offers insights into how grocers can influence in-store buying behavior.

The impact of in-store background music remains hard to pin down, in part, because shoppers often hear the tunes subconsciously. Other than volume, other factors explored in studies have been tempo, mode and genre.

An often-quoted study conducted by marketing professor Ronald Milliman in the 1980s found that supermarket sales went up by 38 percent when stores played slow music. Uptempo music encouraged shoppers to move quickly and skip impulse items, while slower music had the opposite effect.

A 2012 study from Norwegian professor, Klemens Knoferle, found that music played in a minor mode at a slow tempo was the ideal mode/tempo mix. Slow music played in major mode was found to be significantly less effective at reducing the pace of shopping and encouraging thoughtful browsing.

Among studies on music genres, a university study that came out in 2000 revealed that individuals reported themselves as shopping longer when exposed to familiar popular music but, in reality, they shopped longer when exposed to unfamiliar music. A 1993 study from Texas Tech professors found that, when classical music was played in a wine store, shoppers bought more expensive bottles.

DISCUSSION QUESTIONS: How can the right playlist add to the shopping experience? Should grocers play a different mix of background music than operators of department stores and other channels? Which underlying factors — volume, tempo, mode, genre — are most important when developing a grocery playlist?

Please practice The RetailWire Golden Rule when submitting your comments.
Braintrust
"More and more shoppers are grooving to their own soundtracks while shopping or they’re talking with friends and family as they walk the store."

"...generic department stores and grocers definitely do face a challenge with finding the right mix (pun kind of intended?)."

"How fun would aisle-themed soundtracks be?"

18 Comments on "What’s the ideal soundtrack for grocery shopping?"

First, more and more shoppers are grooving to their own soundtracks while shopping or they’re talking with friends and family as they walk the store. Having music playing too loud or discordant is only going to upset them.

Second, the music playing is heard by the staff as well so there needs to be balance and most certainly a lack of repetition. I see this sorrow on employee faces every holiday season after they’ve heard Rockin’ Around the Christmas Tree for the 200th time.

Last, I gave this a lot of thought years ago when my dad asked me what types of music should be piped into his grocery stores. I suggested that the soundtrack should build over the course of the day — classical in the morning, Jazz through lunch, pop in the afternoon and rock at night. He nixed the idea (he was partial to Herb Alpert and Dave Brubeck) but I still like it.

Personally, I prefer the sound of silence – actual silence, not the Simon & Garfunkel track!

We have found that different soundtracks seem to have their boosters. However, we have found that a soundtrack of 140 beats-per-minute seems to really work well with the stores we work with. And that leads us to this conclusion: Disco is the sound of money! Maybe not for evening dinners, and I suppose that some businesses have the perception that their customer has a sweet music spot. But when we see customers of all ages walk in and start keeping beat with the disco music, we know it is effectively, and probably subliminally, affecting their mindset for the good. If you want silence, go to Target. They play no music and, at times, that place is as silent as a closed morgue. Is that good? I don’t think so.

Very interesting to know about disco! I agree that upbeat music does subconsciously put customers in a good mood. Through your findings, do you have a recommendation on volume?

I think it’s also important that there’s a decent variety of music playing, especially for the employees. I worked for a retailer once where a specific playlist of 15-20 songs were selected for each month (with short commercials interspersed). We found the repetitiveness drove the employees crazy and in some cases, they figured out how to disable the sound system.

Music should be played at a level that’s comfortable for the age range of shoppers. Fun, but still in the background. Remember Abercrombie and Fitch’s club era? The music was so loud even kids shopping there complained. If you have to scream to have a conversation it’s too loud. I agree on variety, the same songs on repeat will eventually drive everyone crazy.

I managed stores back before music was piped in, so we had the giant Muzak tapes (like an 8-track cassette but pizza-box sized), and we’d swap them out every few days to prevent us from going nuts from the repetition. There’d always be a day in the hottest part of summer when we’d haul out the holiday cassette and do a “Christmas in July” break (which I never told Corporate about of course…).

Target has been playing music for several months now; though I don’t understand how the playlist is programmed — country interspersed with disco, rock and easy listening/oldies. It’s noticeable when a song that doesn’t resonate with the guest demographic is playing.

I’ve been in urban Targets that play music, the stores in Chicago surburbs that I have visited are still silent.

How fun would aisle-themed soundtracks be? A little So Fresh, So Clean by Outkast in the detergents section, UB40’s Red Red Wine while picking up a bottle of Pinot.

Back in college when I worked in the produce department at a local grocery chain they played “The raindrops keep fallin on my head” song every time the misters went on for the fresh lettuce! I have flashbacks every single time I hear the song — haha.

I love this idea, Jennifer! Or themed tracks depending on the day, season, or product push.

Important elements aside from volume, tempo, mode and genre include: variety, cadence, music as a tool for customer and employee engagement. Consumers who make the effort to grocery shop in person most likely appreciate experience, and knowing store music is curated with intent might add value to shopping. It’s interesting to think about how music choice is communicated to staff and customers, and whether a feedback loop would enhance loyalty.

Music is always a retail hot topic when we’re talking store design: what to play, how loud to play it, how to play it legally, etc.

The right background music is important because it has an effect on the overall in-store experience. Calming music in grocery stores makes sense because shoppers need to concentrate while choosing the right fruits, vegetables and meats. I always shake my head while shopping on a silent Target sales floor. It’s creepy, especially when the store is not busy.

Disco is our universal go-to sound for our boutique and specialty store clients. The toe-tapping beat energizes associates and puts shoppers in the buying mood.

It seems like studies have been conducted all over the world with varying results. I wonder if cultural norms play as big of a role as demographics? It is obviously easier to cater to your audience in a more targeted specialty store, but generic department stores and grocers definitely do face a challenge with finding the right mix (pun kind of intended?).

Great topic. Publix’s retro ’80s music made me want to shop longer (and move to Florida). Their Gen X-friendly soundtrack made grocery shopping a pleasure rather than a chore.

Would you buy more groceries if this was playing? Or work faster? 🙂

Back in my training days I often referred to Morris Massey’s iconic theory and movie “What You Are Now Is Where You Were When.” As far as music goes, his theory was that your preference, regardless of current age, is what you were listening to in early to mid teens. I’m talking Elvis, the Everly Brothers, Danny and the Juniors. That, IMHO, settles the question once and for all.

Now then, it’s not about the music, it’s about the frequencies. To really get on the bleeding edge, begin to research the impact of frequencies in all forms. Not all are audible and some have significant impact on people’s physiology as well as on their emotion. Light source. Color. Vibration. Texture. Employee attitude and happiness.

Our store has a customer base that is made up of both males and females. Over 95 percent of them are aged 18 to 25. About five years ago we started to play a variety of music from the 80s to now with very little repeats in any given day. We set the volume so it’s not so loud that you still can talk to the person next to you and on your phone, but loud enough so people further away from you aren’t disturbed by your conversation. The interesting thing that happened was our customers took out their earbuds, put away their phones and started listening to our music instead. We continue to get positive feedback on our music and our customers now associate it with our store and as part of our brand. We’re fortunate to be able to cater our music selection and volume to a such small range of ages. This isn’t as easy to do in a grocery, big box or department store that serves a much wider age range.

Braintrust
"More and more shoppers are grooving to their own soundtracks while shopping or they’re talking with friends and family as they walk the store."

"...generic department stores and grocers definitely do face a challenge with finding the right mix (pun kind of intended?)."

"How fun would aisle-themed soundtracks be?"