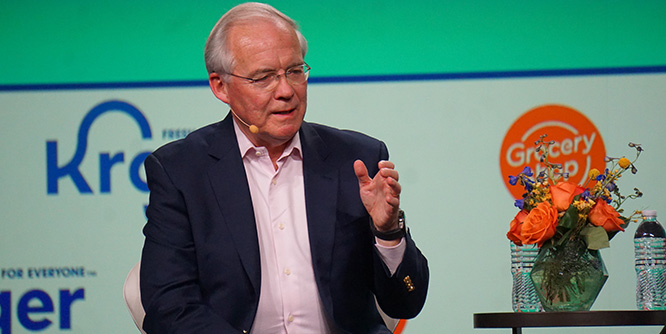 At this week’s GroceryShop trade event in Last Vegas, the crowds have been a little lighter than in the pre-COVID era, but the information flowed copiously.

Kroger chairman & CEO Rodney McMullen took the opportunity to enumerate a series of initiatives his company has pursued in the past year, as the retailer made moves to consolidate its position at the top.

Most recently in the headlines was the Kroger Rush announcement that put the grocer into a strategic alliance with Instacart to enable “ultra-fast” grocery delivery (read: hour or less) for shoppers near any of the chain’s 2,700 stores nationwide.

The move was made as a response to “huge swings in demand” that Kroger stores have experienced with online ordering, Mr. McMullen said.

The most popular products ordered online varied greatly by day of week, even the time of day, he said.

“Many late-night orders involve some sort of sin,” he quipped. “Alcohol or ice cream.”

“We are committed to take that to $20 billion,” Mr. McMullen said, adding a point about incrementality, “For the first time we have data points that show our digital customers are remaining within our ecosystem.”

A key enabler for digital growth will be the “sheds” Kroger has been erecting using automated fulfillment technology from Ocado. They hold promise for reducing the cost of digital delivery, which may partly offset rising labor costs.

“The sheds are also a way into new markets,” McMullen said. “There is one third of the U.S. we are not yet in today. Our aspiration is to feed the whole nation one step at a time.”

This won’t happen instantly, he cautioned, “You don’t eat an elephant overnight.”

Kroger has been making waves recently with its retail media network, an innovation made possible by 11 million daily store visits and four million daily digital visits. “We have an opportunity to monetize that traffic,” he said. “We are working to figure out a way to do that to make all boats rise. That lets us make an offer to CPGs they can’t get elsewhere.”

Kroger sees a chance to double profits in pursuing these initiatives. “I like to say we really have two jobs,” he said. “Job one is don’t lose the customer. Job two is to make money doing that.”

DISCUSSION QUESTIONS: Which of Kroger’s recent initiatives — digital sales, automated fulfillment, media network, etc. —  is likely to have the greatest impact on corporate success? Can Kroger sustain its recent growth in digital sales and continue to build its in-store business at the same time?

Please practice The RetailWire Golden Rule when submitting your comments.
Braintrust
"What Kroger has done, and still is doing, right is to invest in and evolve its business model through trying and testing new things."

What Kroger has done, and still is doing, right is to invest in and evolve its business model through trying and testing new things. Long before the pandemic, Kroger was partnering with Ocado to build dedicated automated fulfillment centers and, within this initiative, it tested the concept in a number of markets including ones where it was underrepresented to understand demand and impact. It is now partnering with Instacart to offer ultra-fast delivery. Kroger has its fingers in a lot of pies because it understands there is no one-size-fits-all model when it comes to online grocery. On top of that, the developments in its private label brands and things like meal solutions have paid great dividends. The one small weak spot is stores, many of which could do with some investment.

I believe automated fulfillment will have the greatest long-term impact. Being able to robotically pick, pack, and prep for pickup or delivery solves an increasingly basic human need for instant gratification. In a world where people can’t wait or plan ahead, one-hour delivery matches our attention span.

Call them MFCs or call them sheds, they are game changers. They enable Kroger to deliver on its promises of omnichannel fulfillment while making it even faster and easier to enter new markets. As CEO Rodney McMullen says, their not-so-secret weapon for entering the remaining third of the U.S. markets they’re not already in: MFCs aka “sheds.”

Five years ago Kroger had no digital sales platform. Today it generates $10 billion in revenue and is quickly on its way to $20 billion, with significant market share to be gained. This initiative will clearly have the most significant impact on the company’s long-term success.

Getting digital right and making it sustainable in a post-pandemic world is the most critical initiative any scaled retailer can have. The question nobody can answer at this point is whether or not brick-and-mortar retailers can build out two channels successfully over time, making today’s digital behaviors the “normal” way for shoppers to source food and related products in, say, five years – assuming we are past COVID-19 and all its variants by then. Cracking that code is not only critical to sustaining digital sales, it has deep and profound implications for the future of Kroger’s physical stores as well.

The most important thing Kroger can do, in order to grow all of its initiatives, is to improve its demand forecasting. My local Metro Market stores (a Kroger nameplate) have suffered from more stockouts than usual recently — whether through supply chain issues, faulty forecasting, or the lack of associates to restock the shelves.

Fulfillment initiatives outside of traditional in-store shopping are going to be hamstrung unless Kroger gets this right. Whether the company promises delivery in an hour, or BOPIS fulfillment at curbside, demand forecasting is a critical piece of the puzzle.

I applaud Kroger’s interest in trying new approaches and testing new ideas. The company needs to put more focus on the fundamentals though, and not lose track in the process. As for the media network, I wish them luck. That was tried 15 years ago without any success – maybe they can bring some new ideas.

Kroger’s strength is their stores. I understand that the CEO needs to weave innovation stories to keep investors happy. But they need to take care to never lose sight of their primary strength: running good stores.

Leaders lead and that’s what Kroger has always done. This includes testing new technologies and innovations, some of which fail, but that’s OK. The most important factor in future success, however, is to keep current shoppers satisfied and acquire new ones. Shoppers want everything right away. That’s why ultra-fast delivery will have the greatest impact on corporate success in the short term.

While the alliance with Instacart appears the most compelling, I believe that the work that Kroger is doing an automated fulfillment will reap the greatest rewards for the company in years to come. The rise in e-commerce, the need to reallocate inventory based on shaky supply chain structures and the uncertain environment from the pandemic all place stress on the fulfillment system. Having an automated fulfillment system not only reduces costs but also provides the ability to shift and flex inventory rapidly, which will be one of the key success factors at grocery retail in the years to come.

Braintrust
"What Kroger has done, and still is doing, right is to invest in and evolve its business model through trying and testing new things."